Popular participation is often cited as one of the fundamental principles of democracy. The right to vote being a freedom that has, and continues to be, sought after by people all over the world. Despite the value of many political systems’ movement toward universal suffrage, the few countries that have confused the right to vote, with a requirement to, have arguably deteriorated the significance of this achievement. Australia is part of a considerable minority that implement obligatory voting laws, and of an even smaller subset that enforce them.

Don't use plagiarized sources. Get your custom essay on
“ Arguments Against Mandatory Voting ”
Get custom paper
NEW! smart matching with writer

Although the proponents of mandatory voting will be considered, the incompatibility of compulsory voting with implied freedoms, with broad theories of democracy and the overall inefficacy of producing a more engaged public, serve as perspectives that substantiate the notion that voting should no longer be compulsory in Australia.

The Australian Constitution raises a number of questions about the constitutional validity of mandatory voting. Given this evaluation of an issue so pertinent to political rights, the implications of these challenges coming from a source as authoritative as this cannot be understated.

The existence of a legal responsibility to vote can be perceived as incongruous with the implied freedom of political communication that was proved in Australian Capital TV v Commonwealth 1992 and recognised ever since. This inconsistency extends to the right to vote being proved as an implicit right in s7 and s24 of the Constitution, which, as reported by Dr. Anthony Gray, is an entitlement to vote that includes the freedom not to. Whilst advocates for the current system of compulsion may contend that voting is a civic duty, such reasoning can be seen as unconvincing as it fails to acknowledge that abstention is a perfectly valid form of political expression.

Through an analysis of mandatory voting from a wider democratic perspective, the idea that compulsion is an infringement of free will becomes increasingly apparent. In addition to the obvious paradox that a democratic country forces its constituents to vote, a truly free nation should allow for the demonstration of dissatisfaction and make provisions for a refusal to identify political beliefs.

Although commentators in favour of compulsion may assert that the ability to provide an informal or ‘donkey’ vote facilitates this, the inefficiencies these contribute to as well as its inherent irrationality, given they are discounted, are persuasive arguments against such an opinion. Moreover, although there is a certain degree of legitimacy in the claim that obligatory voting serves to augment the democratic ideals of equality and participation, compelling a person to vote is ultimately, according to academic Katherine Swenson, antithetical to the concept of individual freedom.

A common belief maintained by supporters of compulsory voting is that it creates a more politically active electorate. Whilst in theory this is conceivable, its practical limitations make the alleviation of indifference a distant reality. In support of this, a 2007 experiment conducted by Peter Loewen et al. in a Quebec election found that required voting had “little or no effect” on the knowledge and engagement of its participants. In the Australian context, despite the assumption that the problem of participation is solved by mandatory laws, in the last election around one-fifth of eligible Australians failed to cast a usable vote. It is argued that candidates and parties rely on these laws to get voters to the ballot.

If this is the case, perhaps the solution is to abandon compulsory voting and thus force parties to organically incite a politically active populace through enticing and innovative policies. The dichotomy of democracy is that it demands both individual freedoms and equality. A great difficulty of modern politics has been the ability to strike a balance between these paradigms, and to determine at what point one must be truncated to enhance the other. Through an analysis of compulsory voting through a constitutional, democratic and practical context, it has become clear that such a regime has no place in a society that strives to exist as an epitome of democracy. The time has now come for Australia to abandon its paternalistic voting laws and entrust its political future with the voluntary voice of the Australian public, and not in a piece of legislation that commands it to speak. 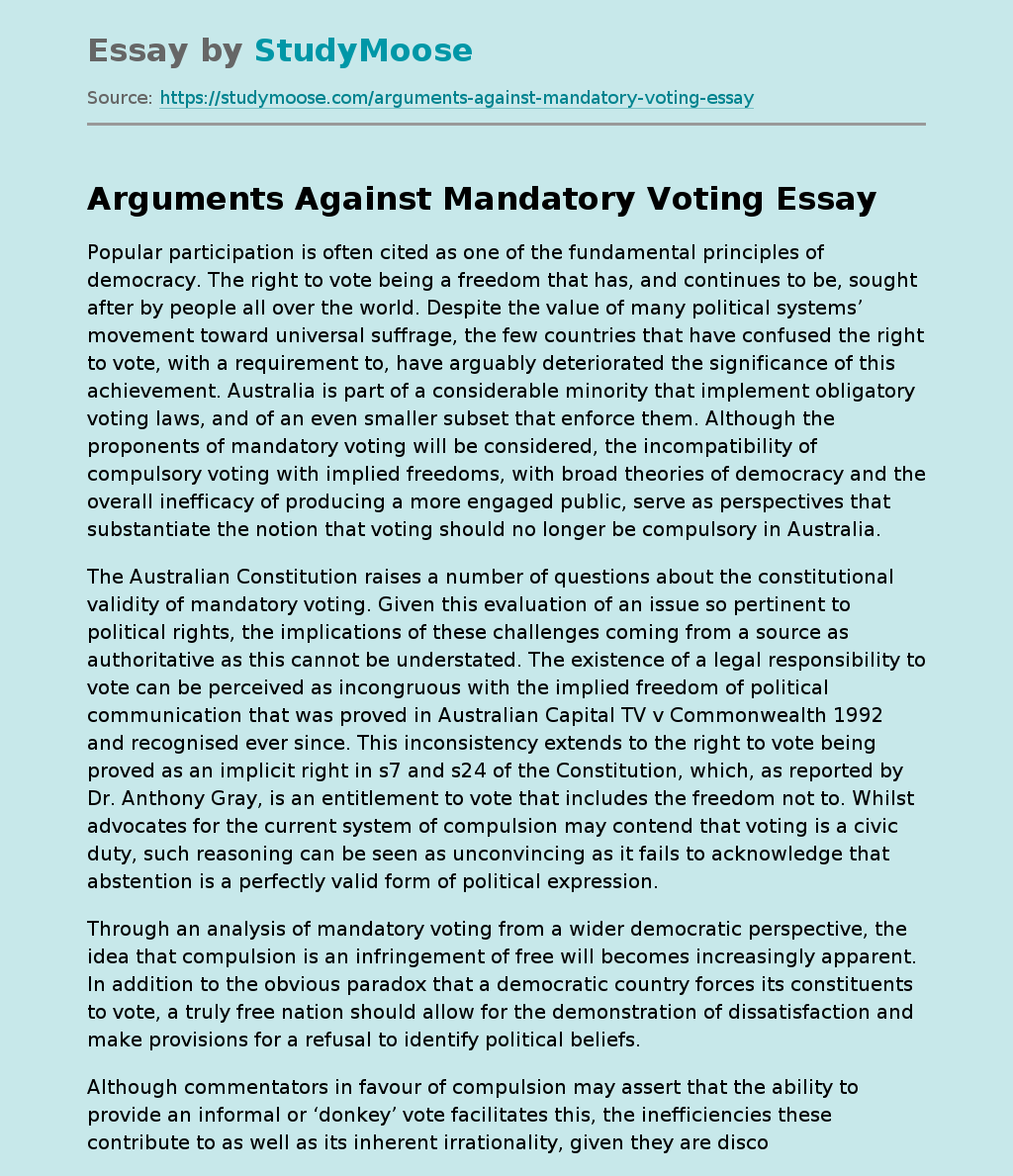