This technology revolution sparked a debate on children’s use of technology. Children are constantly using iPads, iPhones, tablets, and other computerized devices. By over exposing children to technology, they are being robbed of the mental stimulation that comes from doing real, non computerized, activities. It has gotten to the point where one can see a two-year-old navigate an iPhone with ease but struggle to speak. Sixty-nine percent of children aged two to five can use a computer mouse, but only eleven percent can tie their own shoelaces (Generation Tech More Kids Can Play Computer Games than Ride a Bike).

Also, children are at an all time low in the creativity department because of the lack of chances to practice their creativeness. The social interactions worsen due to the fact that children would rather communicate over the internet and via text message than speak face to face. In order to be sure that children get the proper building blocks for their future education, we must limit children’s use to technology.

Today, technology is more geared toward the youth than any other age group. More researches about it in argumentative essay examples. About 75 percent of iTunes top selling games are the educational apps designed for preschoolers and elementary school children (Strauss). Adults, think that because it is made for children that it is okay for a child to sit for hours on end playing the ‘educational’ game, when really they are causing more harm than good.

Unfortunately, children no longer are seeing the need to communicate face to face with each other; children are not learning simple skills that those of before the technological outbreak learned as second nature.

Children are attached to their devices, even as they are walking down the street. In the morning when kids are leaving for school, you see a line of children walking down the street all plugged in. No one says good morning as the pass another person, they bump into people without an “excuse me”, or “sorry”. These are under appreciated, simple task that the children of today lack. One could argue that this is the parent’s job to teach their children social skill, but if the parent lets the child attach themselves to and electronic device, when and how would they have the chance?

Also, according to the Center for Disease Control and Prevention in a study in 2004, 16 percent of children that are between the ages of six and nineteen years of age are overweight or obese. This is a number that has nearly tripled since 1980, mostly due to technological usage. Being overweight can bring with it great health concerns. Many of these children have a chance of developing Type II Diabetes, asthma, sleep apnea, social discrimination, high cholesterol and/or blood pressure. Moreover, according to a Stanford University of Medicine study, elementary students consume 20 percent of their daily calorie intake while watching television, which usually includes unhealthy snacks, largely due to advertisements for junk food and boredom. Coincidently, kids are not burning off any of these calories while they are plopped in front of the television. When it comes down to a child’s creativity, it is being drained by the pre-generated creative art studios on computers.

Before if a child wanted to show how artistic they could be, they would pull out a box of crayons or makers and draw a picture straight from their imagination. Now, we have coloring templates with preset colors that make children color inside the lines. The pseudo creativity has parents fooled into believing that their child is become more creative eve time they hand them the electronic art pad. All that is really going on is that the child is now becoming more reliant on premade sketches to create, no real thought involved. There is no doubt that technology is going to be tremendous part of the future, more specifically, children’s future. We cannot deprive them of technology, but we can limit them. Everyone wants their children to grow up creative, intelligent, and well rounded; however, with too much technological influence it will be a distant dream to achieve. As an older generation, we need to take steps toward figuring out how to save the children from becoming computer dependent, unhealthy, and unable to think on their own. 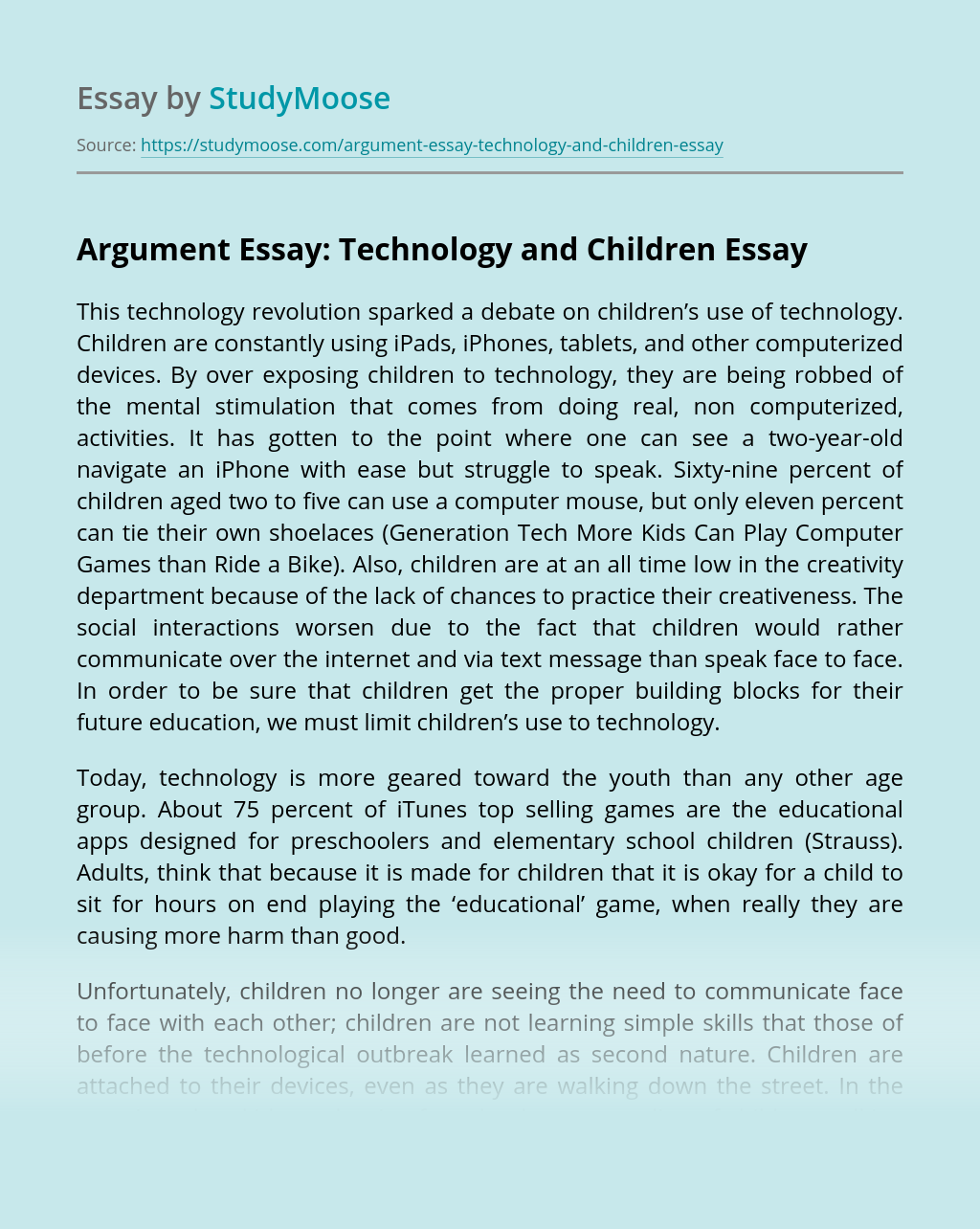