Are Women Better Parents Than Men

Bringing up the children has been the mother’s duty since time immemorial. However, things are changing fast as there are single persons opting for adoption and couples unwilling to tide it through together who are opting to take up the job single handed. There is much to support the mother’s role as the primary caregiver of the family and the young ones, especially through reasons embedded in tradition as well as convenience. However, there have been many examples of single men coming forward, with the nurturing spirit surfacing strongly.

Turn in your highest-quality paper
Get a qualified writer to help you with
“ Are Women Better Parents Than Men ”
Get high-quality paper
NEW! AI matching with writer

Would they fare equally well as any woman or would they be at sea, if confronted by the daunting task of caring for a real child 24/7? The external responsibilities that a male usually carries out in a family—set up as the breadwinner and the protector—give him a tough aura that comes in the way of visualising him performing the mother’s role. However, this cannot be used as a benchmark to determine whether the man is capable of providing children with equal, if not more, tenderness, love and care.

The perception that precedes any male when it comes to parenting may well have become redundant now, or is it still the same?

Are men likely to fare badly at parenting, or have they become more sensitive to the needs of children in a changed environment? In fact some would rather believe that they better than the mothers as well. So do men actually make better parents than women? All individuals are different from one another and may respond or perform at different levels as per their individual capabilities.

However, if a generalist idea has to be formed it would be so that women generally make the better parents as they have the innate maternal instincts that allow them to take the best care of their children.

Women would have subconsciously built a bond with the child even before it is born. Carrying a child in the womb for nine month is sufficient for strong emotional ties to be formed that are beyond understanding of average human relationships. Nature has implanted the nurture and care automatically in women. Bringing up life in its first few years is extremely important and to ensure safety and survival the women are attuned intrinsically to this need. For the men this part might be the difficult bit.

They are seen largely making valuable contributions in a child’s development after he/she has achieved control over bodily functions and has reached a certain level of comprehension. However, there are certain ways in which a father or a male can contribute in the upbringing of children that women cannot do complete justice to. Men are generally rational and logic driven and decisions/choices and actions are based on sound reason. The way a father can allow a child to go all out and grow up would not be possible with mothers, who are more protective and would be daunted by the slightest crunch in the heart.

Of course, the exceptions are always there but the go getting spirit, courage and fierce determination can be imparted very well by the male only. It is important as it makes the child more worldly wise and equipped with a skill that will not be taught in any school as a part of the curriculum. An initial advantage that lies with the woman is that she is the one who is physically and mentally programmed naturally to do a better job of parenting. Women generally are more sensitive and attentive to even the smallest needs exhibited by the children. They are inherently good listeners, blessed with more patience to deal with hours of bawling.

It can be very challenging to keep comforting little children as they are not able to express or communicate at times about what bothers, pains or frightens them. Mothers are usually patient at such time and are willing to put aside hours to calm and reassure them. The important part worth taking notice of is that the young years are really crucial in the formation of a self-confident and a secure individual. If the children are neglected and ignored, they are likely to shape up as insecure somewhere and no matter how much of inputs and care are given after they grow up, that deficit cannot be made up for.

I personally think that women are more capable of adding this tremendous value to a child’s life. However, in the light of recent developments I would like to differ and cite the alternative point of view. The equations in today’s world are changing and the women are actively seeking employment and pursuing very challenging careers. Though the idea of motherhood is very fascinating, the actual process of bringing up a child can be very demanding. And here is where the male’s rational, organised and practical outlook counts. They can make it tick even in such a very demanding situation and hence men are capable of being better parents.

I would still say that there is no doubting the fact that mothers make better parents as they are known to be more balanced, especially in crunch situations. If we were to take a neutral scenario where the financial pressure and the emotional mess of a broken household are absent, women are capable of dealing superbly with the task. Usually, the women are projected as emotional wrecks, poor decision makers and incapable of providing a secure future only in situations where they are not educated enough to go out and earn. Other than that, there are ample examples where independent single women have done a splendid job of parenting.

I feel that the women are capable of a healthy left brain- right brain activity balance and create and nurture life adeptly. I do agree that there are some very valuable skill sets that may be the exclusive domain of women, but there is much that men may be capable of doing. Men are usually not known to be very expressive about their ideas or their feelings. They are more of the doers. The fact that I really appreciate about fathers is that they are capable of imparting many critical life lessons to their children without actually making them look like lessons.

Children emulate their elders. A practical parent would teach the child to evaluate situations without really reacting at the drop of a hat. Men are good at controlling their emotions and by exhibiting more of the controlled reactions in crisis situations teach them calm, analytical approach. Then, there is the general conduct adopted toward the various people that instils etiquette, politeness and fist lessons in people skills. The other issue with the females is that even when the child has grown up, they may still be clinging on somewhere.

Men will not be so edgy about letting go. I really feel that men are better parents as they are capable of a more hands off approach. TIt comes across as a logical conclusion of this debate that the role of both man and woman is equally significant as parents and it is not necessarily so that women make better parents. Most women make good parents as they are better listeners and tend to be more attentive to one’s needs. Being more sensitive than males, women can forge a closer relationship with their children. Father is commonly seen as the rationalist, but this is not always true.

Some fathers can make better parents than mothers; and this could be largely attributed to an individual’s personal upbringing, the childhood he or she experienced and the values that they believe in. If one has had a loving family unit and an environment that made him/her feel loved, it inspires a quite confidence and self-assurance which further gets translated into further parenting. Therefore, it is really immaterial as to whether men or women make better parents. Anyone, with a more mature and balanced outlook is likely to do a better job of parenting—being hands off when required and involved when desired.

Are Women Better Parents Than Men. (2017, Mar 08). Retrieved from https://studymoose.com/are-women-better-parents-than-men-essay 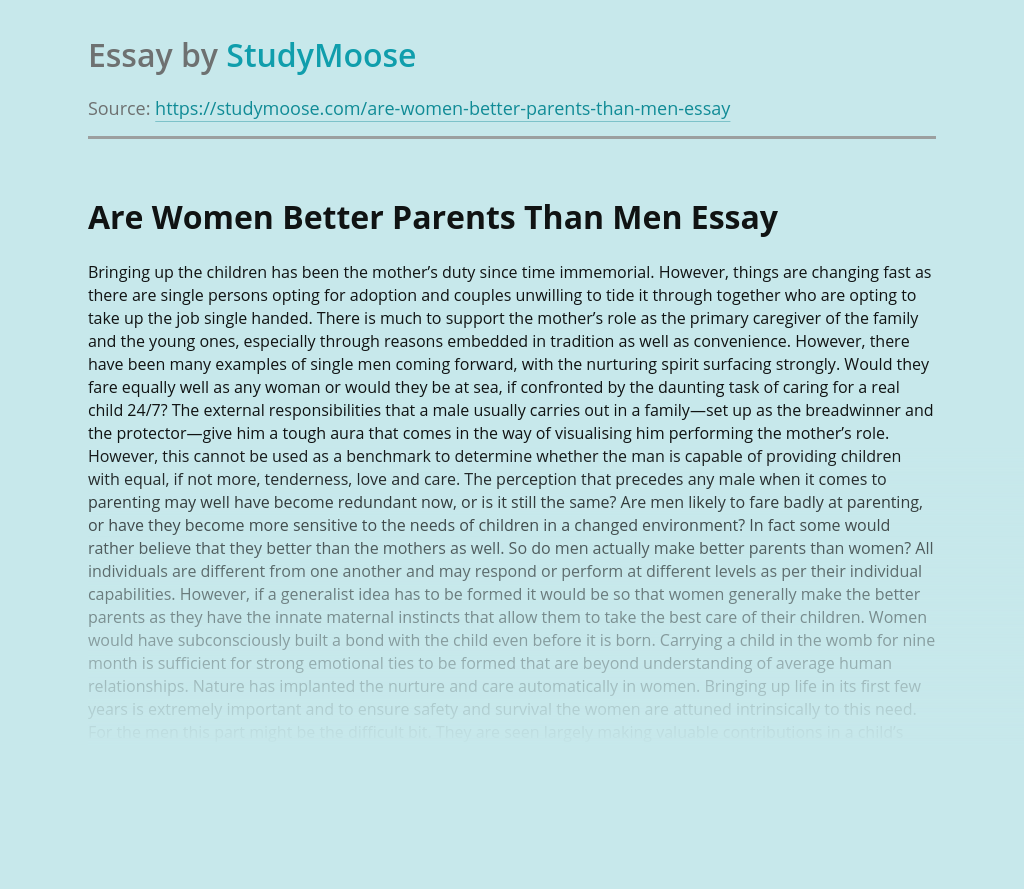 Turn in your highest-quality paper
Get a qualified writer to help you with
“ Are Women Better Parents Than Men ”
Get high-quality paper
Helping students since 2015
Stay Safe, Stay Original