Are men lawyers afraid of woman's brains? this was the heading

“Are men lawyers afraid of woman’s brains?” this was the heading of The Daily Sketch newspaper during the Court of Appeal case of Bebb v The Law Society which held that a

woman is not a ‘person’ as per the Solicitors Act 1843. Five years after this case, the Sex Discrimination (Removal) Act 1919 came into force, allowing women to enter the legal profession. Fortunately, we have come a long way since the case of Bebb. According to the Law Society, 60% of women currently make up newly qualified solicitors and two-thirds of Law students are women.

Don't use plagiarized sources. Get your custom essay on
“ Are men lawyers afraid of woman’s brains? this was the heading ”
Get custom paper
NEW! smart matching with writer

Lord Neuberger states that the legal profession “· can only flourish and retain public confidence if it is diverse and inclusive · “. This is because the legal system is central within society, and as such they should be obliged to promote fairness and be a true representation of what society is today. Additionally, the rule of law states that the legal system must offer justice for all, therefore by having a diverse justice system it produces social good. This is because if there is not a fair representation of gender, race and diversity within the legal system, it could appear to discriminate against certain groups and those individuals who feel that they are not being represented within the justice system could lack trust and confidence in the system itself.

However, Lady Hale states that “equality sounds a simple concept, but the reality is very complicated.” This is true, as although the figures for newly qualified female legal professionals and law students are high, figures show that only 18 percent of women are partners within the top 10 UK firms and for female barristers, the figures are even worse; in 2017 there was only 254 female Queen Council barristers compared to 1,409 males. Additionally, despite the Constitutional Reform Act 2005, which took the power of appointing judges from the executive and giving it to the Judicial Appointments Commission, a 2018 Judicial Diversity Statistic report, showed that senior roles within the judiciary tended to have a lower representation of female judges compared to less senior roles.

A dig into academic literature surrounding gender inequality within legal profession revels the recurring mention of informal barriers women face, such as traditional caring roles, burdens of the profession and family, the long hour work culture and male dominance. Schultz, mentions that women are still expected to prioritise their family and take on the bulk of family duties, this means having to make their working life more negotiable compared to men who see their career as “.. fixed and unchangeable”. Sommerlad and Sanderson, also touch on this point, arguing that commitment is one of the main factors hindering employment opportunities for women within the legal profession and traditional gender norms go against women when seeking employment, this is because all women may be seen as “· potential mothers”. Additionally, McGlynn argues that although the potential economic cost of pregnancy may be of concern for an employer, even if this economic cost was removed through legislation or insurance, the negative attitudes surrounding commitment will still exist, and therefore as Sommerlad and Sanderson found, it is not just about the economic cost of equality, it is a range of different factors such as the “· dominance of masculinity and the assumptions regarding women’s appropriate familial roles”, which are the main reasons behind the disadvantaged status of women in the legal profession.

However, many firms are now trying to combat informal barriers women may face by opting for part-time and flexible working policies. McGlynn suggests that a reason behind this could be because of the ‘business case for sex equality’ where women are seen to bring economic benefits to companies, as by being diverse, businesses will be seen as the employer of choice. Although there may be an initial outlay of costs, such as by providing childcare packages or job-share working schedules, this will lead to rewards in retention of staff and increased efficiency. McGlynn argues against the business case because the economic benefit reinforces the male dominant prevalence of the legal profession and that morality, fairness and justice should be at the heart of diversity rather than economic gains.

On the other hand, Dickens suggests that although UK legislation may encourage some equal opportunity action, employers may do nothing as they are “· unlikely to suffer adverse legal consequences”. This then enhances the business case argument, as once organisations realise that they are going to gain from taking equal opportunity initiatives, “· action rather than mere lip service to the notion of equality could be expected · which should result in a real change in outcomes”. In my opinion, we have to accept that sometimes firms will want to increase gender diversity due to potential economic benefits and not simply because it is the right thing to do. However, the business case strategy can help to increases retention of female employees by enforcing organisations to input provisions, such as career breaks and flexible working patterns, these changes then can help combat some informal barriers that females may face within the legal profession, allowing women to move up the professional hierarchy.

Although, McGlynn, Sommerlad and Sanderson argue that male dominance can be an informal barrier for women within the profession, we must take into account that these stereotypical gender norms can be damaging for both genders. Collier argues that although legal reforms such as parental leave have “· sought men to get more involved in childcare · within an employment landscape”, and with many law firms having paternal leave policies in place, men, have been non-participants in these programmes. One of the reasons behind this is gendered stereotypes which categorise men as being breadwinners and the connection of masculine dominance with value, success and statue. Cunningham states that if men continue to not participate in “· flexible work polices, perceptions of female lawyers as · second class practitioners …” will continue. Cunningham highlights that if both men and women take part in flexible work polices, then the business case model can improve the working life of both genders. He states that moving forward “· partners must set the example for associates, thereby resetting firm-wide perceptions”. Therefore, as Hearn states, it is not enough that women have equal career opportunities if it is expected of them to “· fit into men-tailored professional expectations, working patterns and career commitment”. For the reasons stated above, gender equality goes beyond the creation of laws and policies and until gendered stereotypes are addressed and quashed, for both men and women, real gender equality will never prevail.

Overall, the legal profession has come a long way since the removal of the Sex Disqualification Act and of course, this improvement should be celebrated. However, the legal profession still has a long way to go before it can achieve true gender equality. Although the Sex Disqualification (Removal) Act 1919 abolished the formal barrier for women entering the profession, informal barriers arising from gendered stereotypes still stand, which can lead to gender inequality within the legal profession. Many studies have found that having a diverse workforce can improve the working lives of both genders. By having a happy workforce this can help to increase employee satisfaction, as well as enhancing a company’s image and strengthening customer orientation, which will therefore increase financial performance, so it can be seen as a win-win situation for all. To conclude, both women and men should be supported and represented equally within the legal profession which will show that the profession is “· fair, meritocratic and non-discriminatory”. Each individual brings different experiences and values, which should be celebrated, which will then help lead to democratic legitimacy within the profession.

Are men lawyers afraid of woman's brains? this was the heading. (2019, Nov 23). Retrieved from https://studymoose.com/are-men-lawyers-afraid-of-woman-s-brains-this-was-the-heading-example-essay 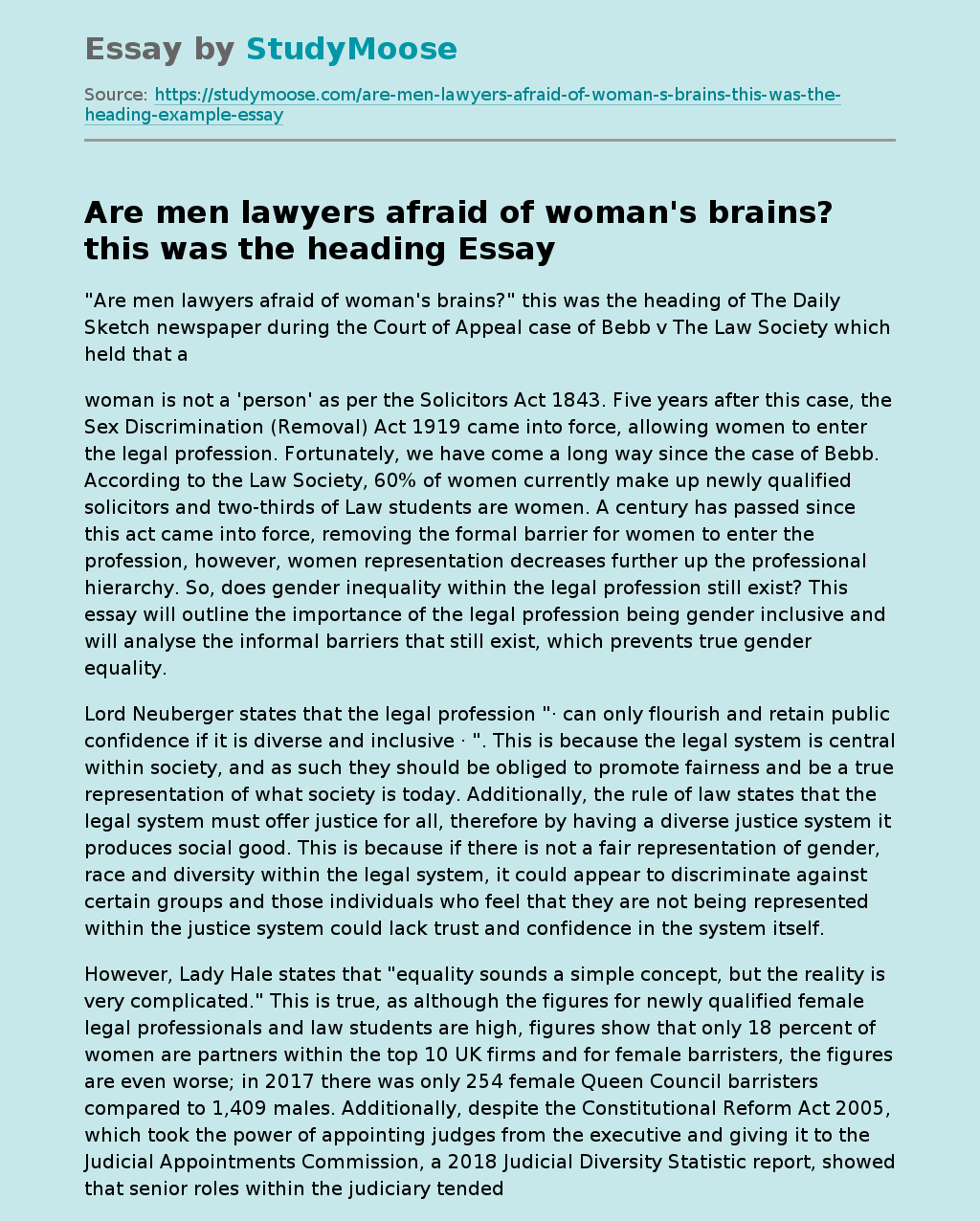