Are Great Leaders Made by Nature or Nurture?

The “great man theory” developed in the 1840s, gave the sense that great leaders are born. Since then, there has been a continuous debate on the practicability of this theory in real-life situations (Geiger, 2016). It is for this reason, therefore, that this paper seeks to answer the question ‘are leaders born or made analyses?” by presenting some augments with examples in support of the advocated position.

The world is fast changing and people are equally changing not only physically but emotionally, psychologically, technologically, and otherwise.

Don't use plagiarized sources. Get your custom essay on
“ Are Great Leaders Made by Nature or Nurture? ”
Get custom paper
NEW! smart matching with writer

This has led to an increase in the desire of people to learn new things, skills and improve on knowledge. With this in mind, nothing under human control is impossible to acquire because as technology emerges people have easier access to learning resources from a variety of sources. Based on this, I stand on the fact that leaders are made and not born. This is due to the following reasons:

Leadership is about nurture, not nature.

That is, leadership is a skill that anyone, in the right environment and under the right circumstances, can learn and become great it in as far as the person is willing and makes efforts to do so. This is due to the fact that, studies indicate leadership tends to be only 30 percent genetic as opposed to 70% which is acquired. These leadership skills include self-awareness and regulation, self-motivation, social skills, and empathy (The National Society of Leadership and Success, 2017). Hardly would one be found with all these skills that are innate in him or her.

Instead, they are learned and improved upon every day through real-life relationships with other people.

Furthermore, there is no only one type of leader. This is because if all leaders were really born with the leadership ability, then, the world would have been made up of only one type of leader. But this has not happened. This therefore means that means every leader is unique in his or her leadership and as such, not all advocated leadership traits or characteristics are common to all leaders. For example some great leaders are extroverts, while others are introverts; some are detailed oriented and administrative leaders while others are strategic leaders (Riggio, 2009).

Some examples to illustrate the above points advocating for the fact leaders are made and not born include Nelson Mandela, who was regarded as bright, a prankster and a petty thief in his youth turned out to be a leader. In the same way, Adolf Hitler, who in his earlier years he was seen as lazy and rebellious later on turned to be a great leader (Walker, 2017). Other people who grew and became great leaders were Abraham Lincoln, Martin Luther King, Maya Angelou, Eleanor Roosevelt, Steve Jobs, Bill Gates, Mark Zuckerberg, and Warren Buffett. They each succeeded in their own sphere in business, politics, humanitarianism, and literature (The National Society of Leadership and Success, 2017).

In as far as the quest of learning continues, leadership can be learned too be it through schooling, human interaction, and life experiences. These would go a long way to impact one’s perspective and behavior, from which a leader can be made. Leadership is about both will and skill given the fact that leaders lead within a specific context and the context impacts the perceived effectiveness of their leadership (Geiger, 2016). So it is about flexibility and adapting to the new situations with no one common way of doing things.

Are Great Leaders Made by Nature or Nurture?. (2021, Mar 03). Retrieved from https://studymoose.com/are-great-leaders-made-by-nature-or-nurture-essay 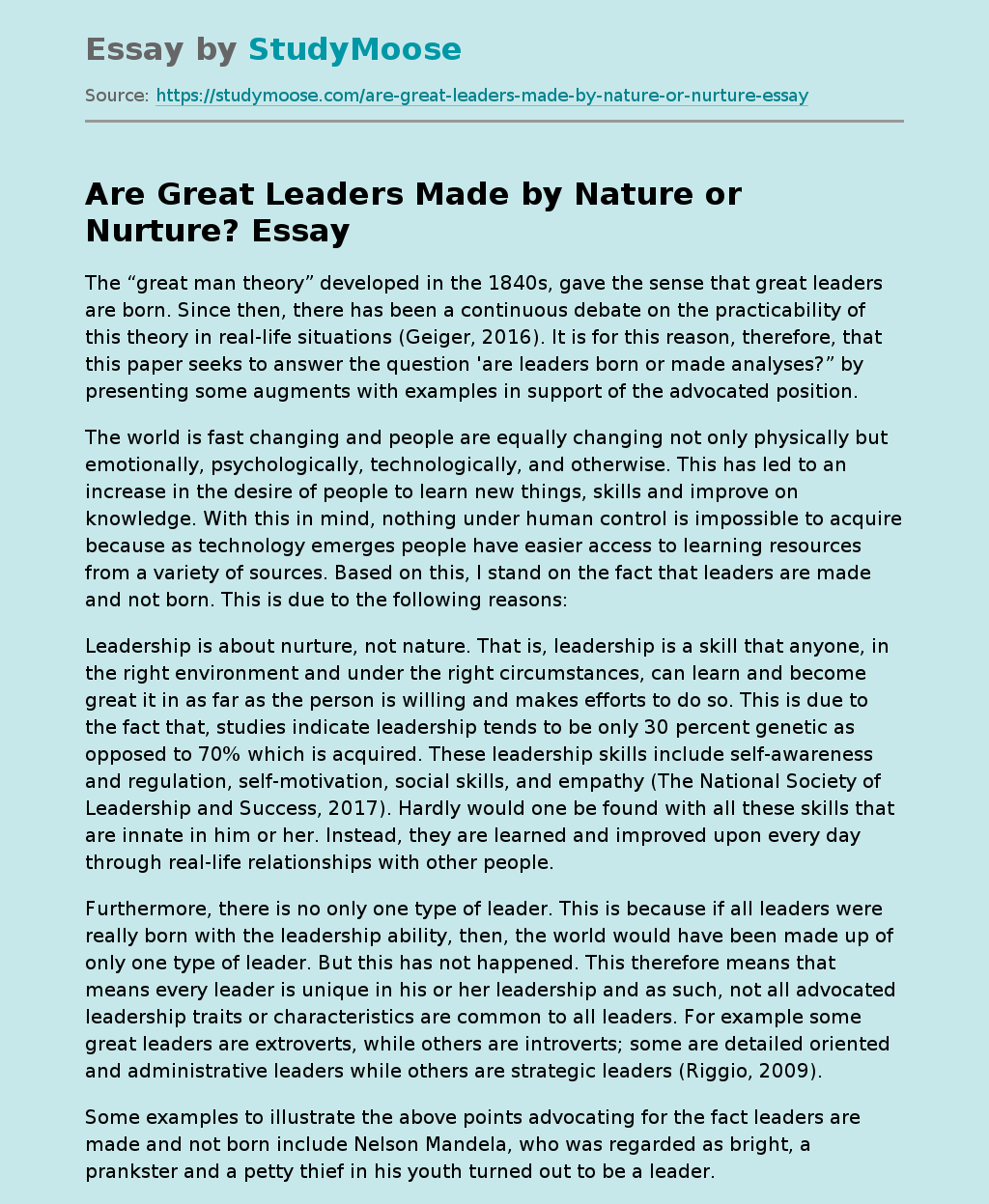