Throughout Native American culture, they have always used everything and not waste anything. For example if they hunt a buffalo, the Indians make sure everything from the buffalo is used. They use the skin for clothing, bones for tools, and meat for food. Everyone is equal except the wise old men and the shaman. Native Americans use the nature to guide them through the day. They know the meaning of respect and never rebelled against authority. Indians never cared how their clothing looks to their peers; they always wore what was given to them.

Don't use plagiarized sources. Get your custom essay on
“ Archetype “Cinderella” and “Rough-Faced Girl” Comparison ”
Get custom paper
NEW! smart matching with writer

The American culture of the 1950s is the exact opposite of the Native Americans. The years after World War Two were generally prosper and stable for the middle-class Caucasian. The United States manage to turn the post war into a consumers culture with a snap of a finger.

During immediate boom of consumerism, suburbs, and economy it overshadowed the some poverty. This rising prosperity didnt apply to everyone.

During this time everyone was obsessed with consumer goods such as automobiles, television, stereos, dishwasher, etc. There was subculture of greasers that originated in the 1950s. They tend to own expensive classical hot rod and motorcycles. Greasers tend to be very conscious about their appearance. They wear leather jackets and comb back their hair with an abundance of hair wax. Rock and roll is the music of choice for Greasers. These two comparisons are very similar to Cinderella and the Rough-Faced Girl.

There are major differences between the Disneys Cinderella and the Rough-Faced Girl.

In the Rough-Face Girl, it describes his society and its surrounding with a prominence on Nature, not on affluence by possessions. Pictures of the sun, moon, stars, plants, trees, and animals are painted in the wigwams showing what the Invisible Being finds significant in his village. The Disney version everyone is consumed with wearing the extravagant dresses and jewelry. The fairy godmother did her magic and changed her tattered clothes into an elegant dress. Oochigeaskw is brave when she walked into the wilderness and made clothes from the accessories of the forest. Every girl that wanted to marry the Invisible Being wore pleasant clothes to impress his sister. The sister of the Invisible Being was too smart for that. She wanted someone that can see past the clothes and appreciate themselves. A carriage was created from a pumpkin by the godmother. It was made to take Cinderella to the princes Ball.

However, Oochigeaskw had to walk for miles to get to the Invisible mans cabin. In the Disneys version of Cinderella, the prince was intrigued by the glass slipper and went looking for the person that fits it. There was no such thing in the Rough-Faced Girl because it dealt with knowledge one possesses. Disneys version of Cinderella is related to the developed nations society because people base their decision for a companion with exaggerated expectations. Usually monarchies in Europe have this kind of attitude towards marriage. They want their children to marriage into another royal house to keep the power within their grasp. They frown upon the lower class. In England, the queen was obviously upset when Charles married Diana. She was a kindergarten teacher and from the lower class. The Rough-Faced Girl is related to countries that practice arrange marriages because it is about the well-being of the family than the artificial aspiration to live a better life.

The essence of these questions and their related answers are based on Nature. The individual must be intelligent and have the wisdom to appreciate the earth as a gift without taking advantage of it. This was a reasonable test based on what is inside the heart of the individual to see if she is good by the natures results. The sister of the Invisible Being is a decent moderator this because she had to go through many women to find her brother a wife. She judged the women on their wisdom to see inner beauty and not the exterior of the person.

Basically the Invisible Being uses his judgment to choose his mate by not using beauty. It continues as Oochigeaskw takes a bath in the lake and transforms back to her old self knowing that she will get married to the one and only Invisible Being. That change and recognition of her beauty is only stressed after the test and not before. The marriage between Oochigeaskw and Invisible being is based on her inner beauty and wisdom. However, in the Disney version of Cinderella illustrates how beauty depends on the exterior. For example, Cinderella is much more beautiful than her stepsisters. The prince judges beauty on the size of a womans foot. There is always the fairy godmother to make everything pleasing to the eye.

The United States society has a hard time seeing people for their uniqueness; however we prefer if everyone was bundle together by similar quality. These standards are not only normal, but enviable by most people. Personality and intelligence is overridden by beauty in the tale. That is another example of the way society has portrayed women. The Native American is more intelligent than what that Europeans and other settlers think. When the European came to the US and started to destroy the natural goodness of their surroundings the Native Americans knew there will be trouble in the future. For example in the Gulf Coast, people got rid of wetlands and built houses. That ruined the natural barrier to guard against the weather such as a hurricane. Now you have seen the differences between Native American culture and the American Culture. 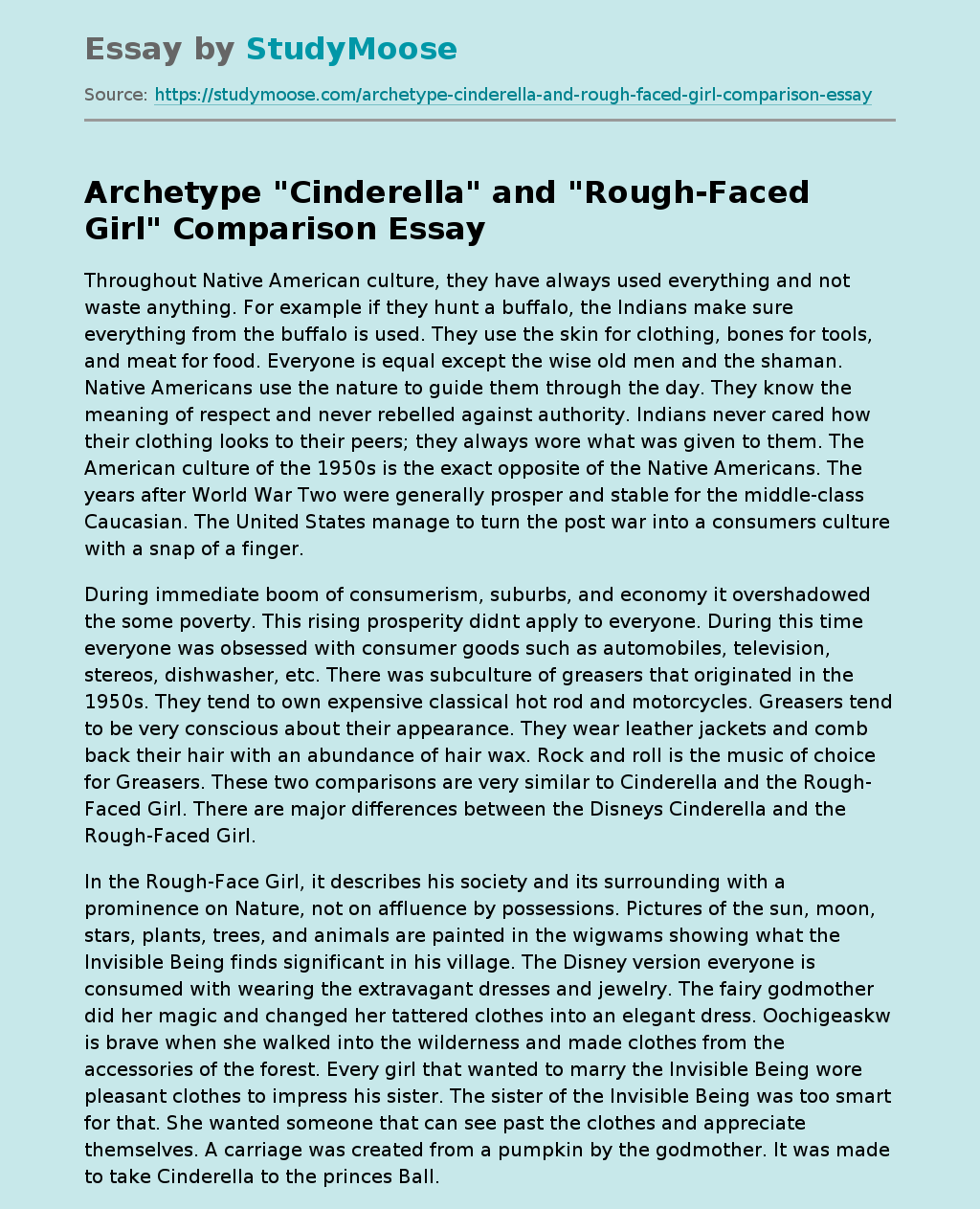