The diseases of Hunger

Diseases that affect humans are many times categorized into either a male disease or a female disease. In other words, the public views the disease as being usually carried by males or by females. Anorexia and bulimia are almost always classified as a disease that affects mostly females. These diseases may also be classified into different categories depending on what their cause is thought to be. Maggie Helwig, author of the short story “Hunger,” believes that “anorexia and bulimia are particularly feminine statements about consumption and consumerism.

Don't use plagiarized sources. Get your custom essay on
“ The diseases of Hunger ”
Get custom paper
NEW! smart matching with writer

” Helwig provides numerous pieces of evidence for her claim, as one can see in the following explanation of this support.

Helwig begins by saying that the consumer society has “gone so far we can even buy into hunger.” She goes on to say that this is not the reason behind anorexia and bulimia. No girl starves herself nearly to death to be attractive. Instead, Helwig suggests that it is “the nightmare of consumerism acted out in women’s bodies.

” Aside from religious purposes and mental illness, Helwig states that the reasons behind contemporary anorexia and bulimia are “of fairly recent origin.” The public was astonished to learn of anorexia as a serious problem in the 1960s and later of bulimia. Helwig also discusses thoughts that many had about these illnesses at the time. People thought that they were simply a fad, when really they were drastically more serious.

Helwig’s second attempt at proving her claim, discusses the theory that these disorders were part of adolescent rebellion.

She states that many believed anorexia should be blamed on over-controlling mothers. This brings Helwig to argue the following point. “Can it be an accident that this happened almost precisely to coincide with the growth of the consumer society… that had become very nearly uncontrollable,” Helwig asks. She continues to say that “conspicuous consumption” had become of minimal importance. Helwig further supports her views by stating that the only “satisfactions” of the contemporary society do not exist at all. Therefore, those who choose to become deathly underweight are refusing to take part in this unreal life.

Helwig also argues a third point in supporting her claim. She discusses society’s negative view of food. It is even referred to as “sin” and Helwig also states how this is commonly a problem faced by women. She says that it is “women who live through every implication of our consumption and our hunger” and our “awful need for something real to fill us.” Lastly, Helwig introduces the thoughts of anorexia behind today’s society. She states many women’s view that these diseases are “almost safe really.” Also that this was simply “fashion gone out of control.” This led the way for the age of the weight-loss clinics and aerobics classes. Finally, Helwig believes that no one has understood the reason behind these illnesses. Her belief is that these girls have something to say and cannot do so.

Maggie Helwig offers much evidence for her claim that anorexia and bulimia are mainly faced by women and that they are statements about “consumption and consumerism.” Three major supports have been discussed, although more such evidence can be found in her short story, “Hunger.” Whether Helwig is correct can not be proven. However, she provides adequate support for her thesis and it ought to be strongly considered as the main cause for the illnesses discussed.

The diseases of Hunger. (2016, Jun 23). Retrieved from https://studymoose.com/the-diseases-of-hunger-essay 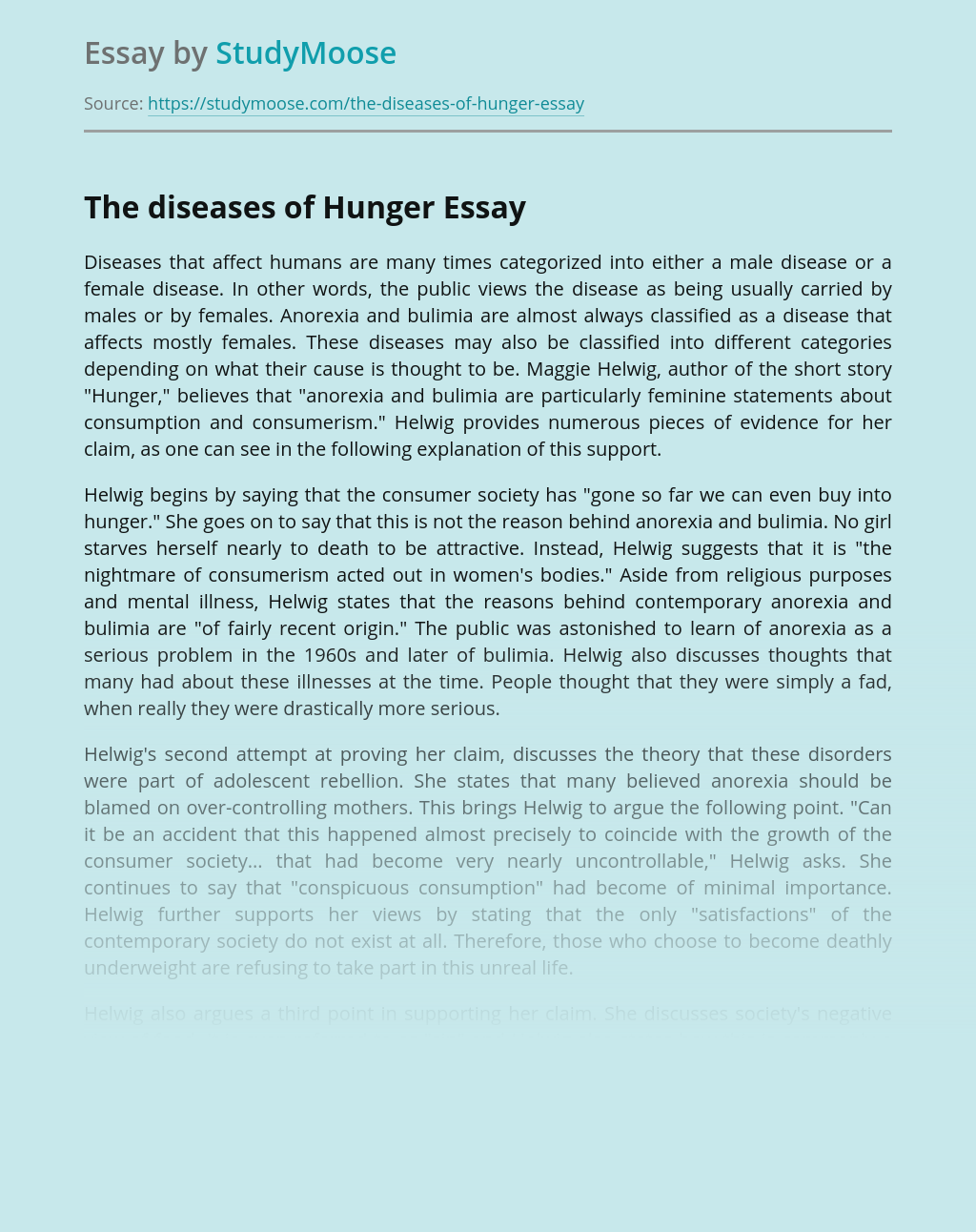