Appearance vs. Reality in The Great Gatsby

Think about it, it’s the 20s and everything is in an optical illusion of what happiness should be after the war, such as how rich someone should be, how someone should look, all creating the idea of a false reality. The novel The Great Gatsby creates and shows many themes about life in the 20s as it is about the life of a fake rich named Jay Gatsby or James Gatz told by Nick Carraway who can´t seem to figure out his feelings towards Gatsby.

Don't use plagiarized sources. Get your custom essay on
“ Appearance vs. Reality in The Great Gatsby ”
Get custom paper
NEW! smart matching with writer

Throughout the novel Nick thinks he knows how he feels about Gatsby and his personality however, he doesn’t know how he truly views him until his tragic death in the end.

Nick’s perception is constantly changing as he thinks he knows the truth but ends up finding out he doesn´t which angers him into not liking Gatsby then he will inch towards the truth and like Gatsby again. In the book Nick says ¨he smiled understandingly¨ (Fitzgerald 48), he gives off the idea that he already likes Gatsby and he can see that they will be friends. He also changes his perspective when he says ¨I was more annoyed than interested¨ (Fitzgerald 67) shows that he is already tired of Gatsby and his personality except for his idea changes again in chapter 8 as he tells Gatsby he is the only real person even though his life was based on lies.

By looking at the lives and ideas given off by the characters Gatsby and Daisy we will see how Nick comes to his final idea of Gatsby is one of the only good people and how money can affect people in the way they see reality.

In the novel, we see the false idea or life that Gatsby has created for himself. He even tends to get caught up in the illusion that he created. As everything in his life that he has accomplished has come from lying about his life which makes him a fraud. Jay Gatz grew up poor however tells everyone he’s an Oxford man who grew up rich. However, in reality, he got all of his money from bootlegging and selling illegal bonds. Gatsby is one of those people who do not like to let go of the past and think you can repeat the past he shows this when he says ¨why, of course, you can!¨ (Fitzgerald 110). He says this thinking he can rekindle his love for daisy although she has moved on with her new life. He also throws extravagant parties to get the sense of the fact he now has money so this would make her want him. Nick talks about one of the parties as it has multiple dinners, ¨the first supper-there would be another one after midnight¨ (Fitzgerald 44) this shows how extravagant he wants everything to be to appeal to her thinking she will come back to him. The way Gatsby overall only does everything to impress Daisy and even lies to be on her social level is somewhat saddening to Nick as it makes him feel bad for Gatsby in away.

Daisy is someone who idealized her life around money and the false sense that money would give her everything in life, even happiness. And even hopes to teach her daughter these false ideals. She says ¨I hope she´ll be a fool that’s the best thing a girl can be in this world¨ (Fitzgerald 17), explaining that she wants her daughter to grow up to be beautiful and not have to worry about problems. Throughout her marriage to Tom, he has cheated and she knows about them, however, she stays because she feels the money will be able to hide the fact her marriage is all a lie. She shows that her life is a sham when she says ¨it couldn’t be helped¨ (Fitzgerald 15) talking about the fact that Tom’s mistress was calling at dinner she also goes on to talk about how she was left alone after giving birth with an ¨utterly abandoned feeling¨ (Fitzgerald 17). This quote shows how her life isn’t what everyone seems to think it is and how she tries to hide everything with the false idea money can solve her problems.

Nick eventually becomes a part of this world however, he sees the truth of what wealth can do to a person and their ideas about life. And sees in his own eyes money can buy everything but happiness. He even sees how money and selfishness arise as he watches Daisy choose Tom over Gatsby even though he was completely selfless and protected her constantly. When Nick sees the truth behind everything he goes on to tell Gatsby ¨they’re a rotten crowd. You´re worth the whole damn bunch put together¨ (Fitzgerald 154) revealing his ultimate feelings towards Gatsby. Which are that he even though lies about things and is a criminal is an overall good person. He even sees now how nieve his friend was for letting his money and appearance distract him from true happiness.

In conclusion, throughout the novel, Nick´s inconsistency with how he views Gatsby impacts the theme of Appearance vs. Reality by himself not being able to come to terms with how unrealistic his life was and the people around him truly were. Until he took a step back to see how money affected the people he once loved.  We also see how Gatsby and Daisy lived in the false reality that money would fix their problems and they would be able to be together yet in reality Daisy came out to be selfish and Gatsby naive.

Appearance vs. Reality in The Great Gatsby. (2020, Oct 01). Retrieved from http://studymoose.com/appearance-vs-reality-in-the-great-gatsby-essay 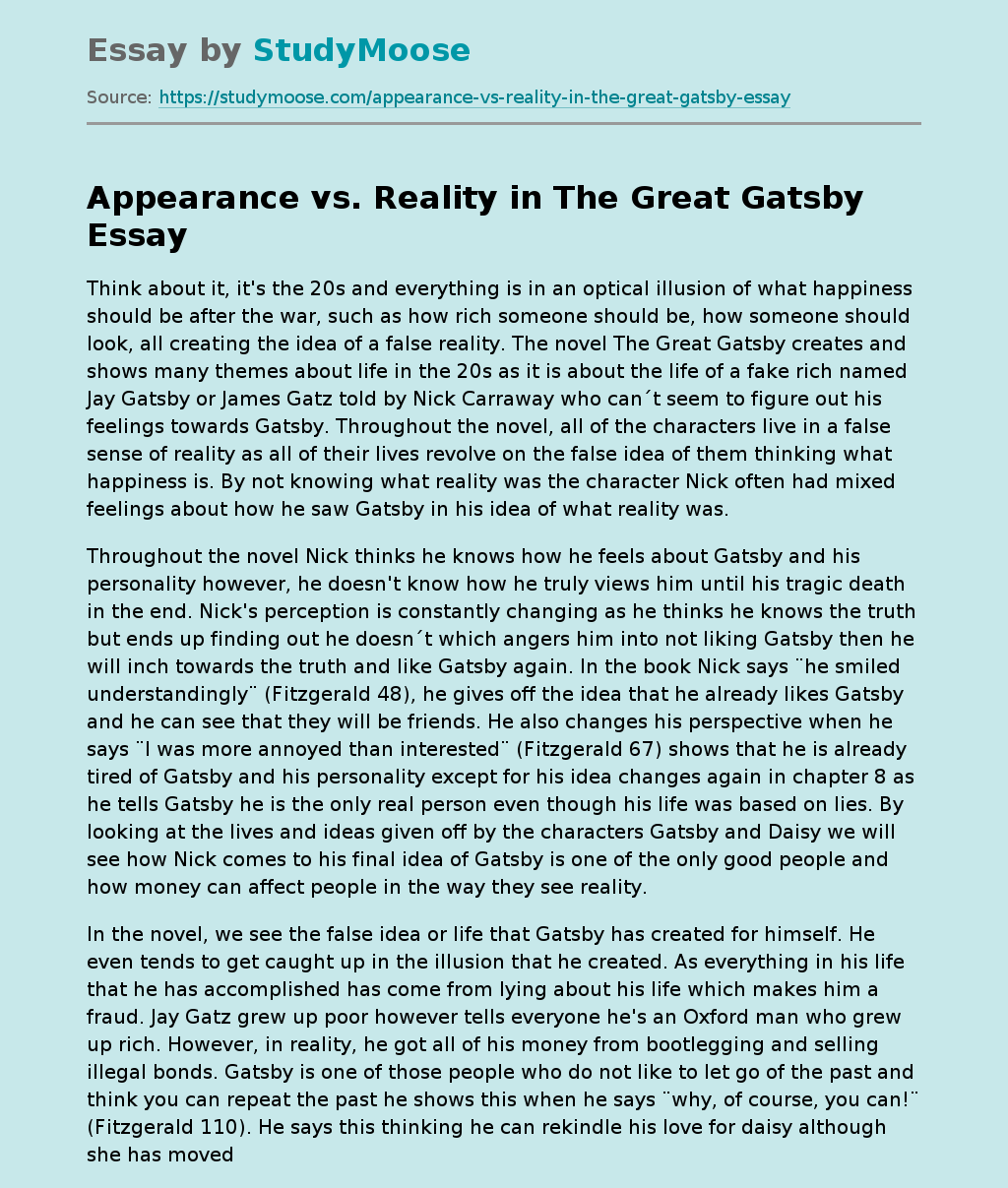