A. P. J. Abdul Kalam was born on 15 October 1931 in a Tamil Muslim family to Jainulabdeen, a boat owner and Ashiamma, a housewife, at Rameswaram, located in the Indian state of Tamil Nadu.[7][8][9][10] He came from a poor background and started working at an early age to supplement his family’s income.[11] After completing school, Kalam distributed newspapers in order to financially contribute to his father’s income.[11] [12] in his school years, he had average grades, but was described as a bright and hardworking student who had a strong desire to learn and spend hours on his studies, especially mathematics.[12] “I inherited honesty and self-discipline from my father; from my mother, I inherited faith in goodness and deep kindness as did my three brothers and sisters.” —A quote from Kalam’s autobiography [9]

After completing his school education at the Rameswaram Elementary School, Kalam went on to attend Saint Joseph’s College, Tiruchirappalli, then affiliated with the University of Madras, from where he graduated in physics in 1954.[13] Towards the end of the course, he was not enthusiastic about the subject and would later regret the four years he studied it. He then moved to Madras in 1955 to study aerospace engineering.[10] While Kalam was working on a senior class project, the Dean was dissatisfied with the lack of progress and threatened revoking his scholarship unless the project was finished within the next three days. He worked tirelessly on his project and met the deadline, impressing the Dean who later said, “I [Dean] was putting you [Kalam] under stress and asking you to meet a difficult deadline”.[14] For him becoming a fighter pilot was a “dearest dream” but he failed to realize it as he bagged the ninth position when only eight slots were available in the IAF.[15]

Before his term as India’s president, he worked as an aeronautical engineer with DRDO and ISRO. He is popularly known as the Missile Man of India for his work on development of ballistic missile and space rocket technology.[4] Kalam played a pivotal organizational, technical and political role in India’s Pokhran-IInuclear test in 1998, the first since the original nuclear test by Indian 1974.[5] He is currently the chancellor of Indian Institute of Space Science and Technology, a professor at Anna University (Chennai), a visiting professor at Indian Institute of Management Ahmedabad, Indian Institute of Management Indore, and an adjunct/visiting faculty at many other academic and research institutions across India. In May 2011, Dr. Kalam launched his mission for the youth of the nation called the can I Give Movement. [6] Dr. Kalam better known as a scientist, also has special interest in the field of arts like writing Tamil poems, and also playing the music instrument Abdul Kalam was born in Rameswaram, presently Tamil Nadu, in India in 1931. He spent most of his childhood in financial problems and started working at an early age to supplement his family’s income. After completing his school education, Kalam graduated in physics from St. Joseph’s College, Tiruchirappalli. He then graduated with a diploma in Aeronautical engineering in the mid-1950s from the Madras Institute of Technology. [8] As the Project Director, he was heavily involved in the development of India’s first indigenous Satellite Launch Vehicle (SLV-II). 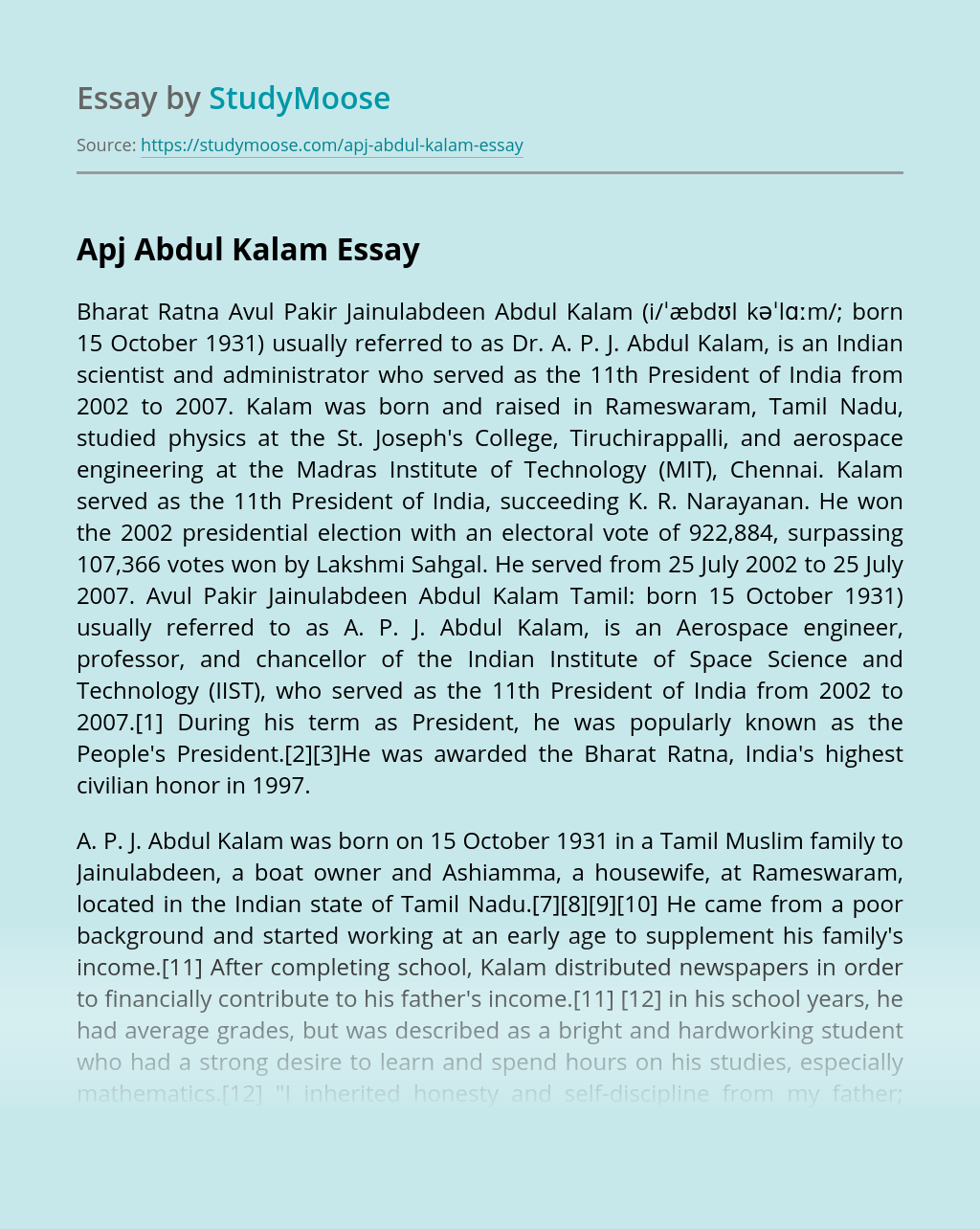 In the epic poem “Gilgamesh,” the main character was two-thirds God and one-third human. Gilgamesh presented himself with a god like mentality. His power was neither gained nor deserved. He’s a selfish leader who held his power by striking fear into the hearts of those forced to succumb to him. The gods created Enkidu, a...

Nowadays, many billions of plastic bags have been using every year, and it seems to be increased more and more. According to Noland (2013), in the UK, the number of plastic has risen up to 5.4% in 2010 to 2011. Another statistic illustrates that 90 percent of plastic bags do not be reused or recycled...

Get Essay
Understanding Organisations and the Role of Human Resources

A new manager is starting in the organization shortly. You have been asked to provide a written briefing note for this new starter, so that they can gain some understanding of the organization in preparation for their start. Unit: 3HRC Understanding Organisations and the Role of Human Resources Haldex Brake Products Ltd 1. Understand the...

Douglas Adams concluded in Hitchhiker’s Guide to the Galaxy that “There are those who think that VR may be the most important development since man first chipped flint, and there are those who don’t know what it is yet”. (2) We can say that VR is one of the most topics talked and discussed in...

As our modern generation continues to build and discover new ways to make life easier, the USPS (United States Postal Service) is having trouble adjusting. They still go by traditional ways which is time consuming. People may no longer need their services because of the newly developed way called “emailing”. The internet has provided a...