A discussion of “Animal Farm” by George Orwell as an allegory of Stalinism.

Most directly one would say that Animal Farm is an allegory of Stalinism, growing out from the Russian Revolution in 1917. Because it is cast as an animal fable it gives the reader/viewer, some distance from the specific political events. The use of the fable form helps one to examine the certain elements of human nature which can produce a Stalin and enable him to seize power. Orwell, does however, set his fable in familiar events of current history.

Don't use plagiarized sources. Get your custom essay on
“ Animal Farm – a rewiev.txt ”
Get custom paper
NEW! smart matching with writer

Old Major, a eminent pig on the Jones farm, is regarded as the wise superior by the other animals. He has had a strange dream and calls the other animals together to talk about their disastrous situation. Old major declares: “Let us face it, our lives are miserable, laborious and short”. He declares in Marxist terms that Man is the problem: “Only get rid of the Man, and the produce of our labour would be our own.

Almost overnight we could be rich and free. What then must we do? Why, work night and day, body and soul, for the overthrow of the human race! That is my message to you, comrades. Rebellion!” The simple, but emotional appeal, gets trough to the uneducated and plain animals and, as in all revolutions, the planning begins in euphoria and idealism. No voice is raised to ask relevant question or call for a considered debate. The appearance of rats at the meeting raises a question: “Are rats comrades?” A democratic vote results in a ringing “Yes!”.

And Old Major proclaims, “No animal must ever tyrannise over his own kind. Weak or strong, clever or simple, we are all brothers. All animals are equal!” It was however generally understood that the pigs were the cleverest of the animals, so the work of organising for the Rebellion fell naturally to them. Especially two pigs take over leadership: Napoleon and Snowball. The pigs developed Old Major’s teaching into a complete system of thought: Animalism. Rules of equality, formality, and hard work was proclaimed and encoded in The Seven Commandments – “an unalterable law.” The animals enthusiasm was expressed through a hymn, “Beasts of England.” The Rebellion comes sooner then it had been excpected and the successful animals join together with a will to build a new and better world. To symbolise the new day the name of the farm is changed from Manor Farm to Animal Farm. Very soon, however, under the leadership of Napoleon, the techniques and sanctimonies of tyranny begin to appear. First, there is a strong emphasis on ceremony and ritual. Sunday morning meeting is set up by Napoleon. Slogans are recited. A favourite is their great announcement: “Four legs good – two legs bad!” When a counter-attack by farmer Jones is beaten off, the great event is declared “The battle of the Cowshed”, and military decorations are created including “Animal Hero – first Class” and “Animal Hero – second Class.” Napoleon awards both of these to himself. Very soon comes the discrediting of CO-leader Snowball. Snowball is the idealist, faithfully considering the welfare of all the animals while Napoleon is the pragmatist, ready to achieve his purposes with violence. So the technique of the “big lie” and constructed evidence results in Snowball’s being driven out from Animal farm, leaving Napoleon in sole command. The discredited Snowball can now be blamed whenever problems arise. Here Orwell is paralleling the conflict between Stalin and Trotsky with Stalin the winner. Another distinguishable technique used by Napoleon to hold power is revision of the past. The seven Commandments – “unalterable law” – are revised one by one to suit Napoleon’s purposes. Also the democratic meetings are abolished, and replaced with assemblies where Napoleon issues his orders. The workers are often perplexed but they absorb everything they are told and therefore become perfect subjects for manipulation. The most outrageous and most effective techniques used by Napoleon are the show trials, the humiliating confessions, and the summary executions. Orwell does not explain why there is an epidemic of confessions, but a reasonable conclusion is that the uncontrolled climate of fear paralyses the judgement, generates irrational guilt, and creates the confession, in the hope that this will earn safety. In any case this happened in the Moscow treason trials of 1936-1938. Other techniques include reports that say that things are better than ever before; creation of a Mystique of the Leader; elimination of even loyal supporters when they no longer can be useful. A case in the point is the sale of Boxer, a great worker and archetype, to the glue factory. Hypocrisies are numerous, special privileges for the pigs are given and then justified through a form of doublespeak (a term also found in Orwell’s other book “1984”). The final cynical of all tyrannies is expressed in the last revision of the Seven Commandments: “All Animals are equal, but some animals are more equal than others.” The last episode of the book parallels to the Teheran Conference, which is symbolised by a game of cards between the pig-dictator Napoleon and a human neighbour, Mr Pilkington. Suddenly when each of them plays an ace of spades simultaneously, the frightened farm animals, watching the violent quarrel which follows from outside the parlour window, are unable any longer to distinguish the pig’s face from the man’s. The final moral is of course, that the animals’ revolution has been betrayed by the selfishness and will to power of the pigs who, like the communist party in Russia, have controlled it from the beginning; and the living conditions of the animals are in the end no better than they were under their human exploiters. Instead of gaining freedom the animals only have exchanged one set of masters for another. The vision with which they began has been corrupted. 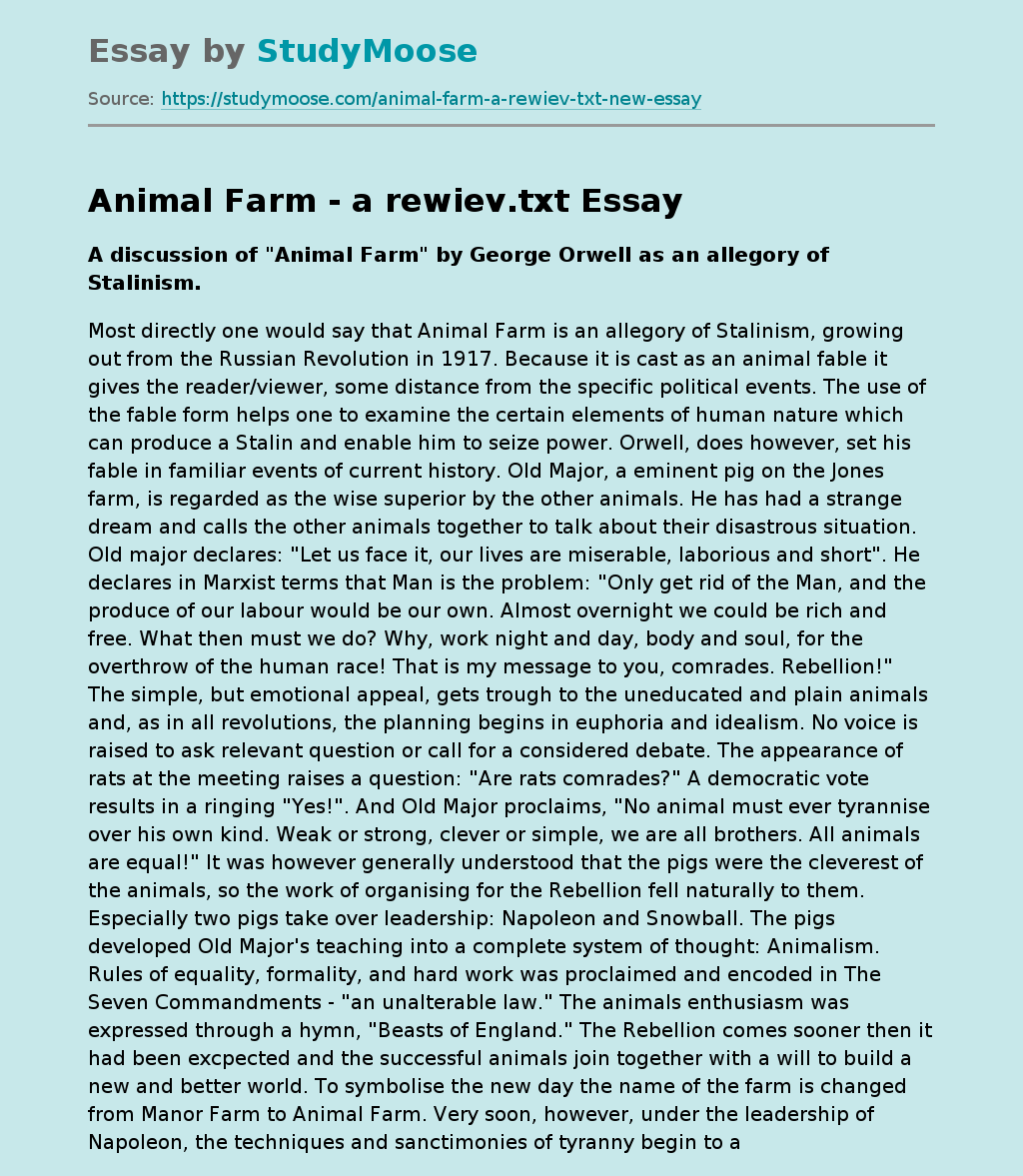