Following the times of the middle 1950’s Abstract Expressionism sparked an interest for Andy Warhol, and during the 60’s Andy, and Roy Lichtenstein created a new realism of America. This new realism was called Pop Art which expressed daily life in America as it was being lived. Warhol was born in 1928 as Andy Warhola, he grew up with a curiosity in commercials, and after a very successful life he became the main figure associated with Pop Art.

His art is some of the most well known art of all time, and he is considered one of the best artists of all time, his greatest painting was done on canvas in 1963 called the Eight Elvises and is worth one hundred million dollars, which this amount is in the likes of Jackson Pollock, and Pablo Picasso’s work.

Andy Warhol has many accomplishments during his life, and he was inspired by many different people and things. His talent led him to many opportunities including movies and artwork.

Growing up Warhol was diagnosed with chorea which is a disease of the nervous system that causes movements that are involuntary. This disease is correlated with scarlet fever, causing Andy to grow up primarily bed-ridden, and this is where he listened to the radio and collected pictures of movie stars which helped him gain his own personality and attributes. After his struggle he spent his time at Carnegie School of Fine Arts Institute in Pittsburgh, he studied hard and showed his artistic capability early while he studied commercial art.

Warhol was quickly offered a position in New York drawing advertisements for a shoe company. This is where his whimsical colors started to be portrayed in his drawings of those shoes. While working with the shoe company he was recruited to illustrate the vinyl album covers for band by record labels who at the time were booming with musical talent. In 1952, while Warhol was doing shoe art he was also doing his own art on the side. He wanted to show his early work to the public, so after pitching his idea he got his first art show in New York at the Hugo Gallery.

All of his works during these times are very interesting to me, because he used his art to represented life as it was in America every day. Warhol took these everyday things as simple as Campbell’s soup cans, or Coke Cans and turned them into monumental items in America’s life. These items sell over 3 million products a day; these companies’ should be thanking Andy for making their business boom Worldwide. Warhol stated “You can be watching TV and see Coca-Cola, and you know that the President drinks Coca-Cola, Liz Taylor drinks Coca-cola, and just think, you can drink Coca-Cola, too” (Art).

This art of the soups and cokes form analytic lines the way he stacks cans precisely and mathematically as he draws, which takes extreme precision and measurement on his part to make sure that everything is straight and perfect. After these paintings were produced, Warhol began getting very well known in the New York art world. This art led him to moving on to what was called “The Factory” where many creative minds ranging from actors, writers, musicians, and other artists would drop by and lend their inspiration.

The Factory” is where Andy let his ability shine, he decided to get rid of a difference between high and low art, and make known that art can be found anywhere. High art being art that has history and low art being art that has no history, but Andy wanted to clear high and low all together. Warhol liked the factory because it had a crazy atmosphere that fit his life style. He produced all of his work during the time at factory while he was working there.

Including in 1963 piece that had the most impact on me which was the silkscreen painting Eight Elvises because the unusual thing about this silkscreen is that it is unique. Warhol had many other silkscreen’s that were produced sometimes in the hundreds, and Warhol only made one Eight Elvises. This 12 ft canvas shows from left to right Elvis in cowboy attire with his gun drawn in his right hand with seven repeat images on the left of his body finishing off with a full body view with left hand in sight as his body fades away. Warhol was known as a primary visual artist and this art is an example of that.

Silkscreen is a stencil method of printmaking in which a design is imposed on a screen of silk or other fine mesh, with blank areas coated with an impermeable substance, and ink is forced through the mesh onto the printing surface. Warhol did not bother to clean up the imperfections of the print including slips of the screen, uneven inkings of the roller, and general graininess. I believe that this artwork and the artists represent America because Warhol used American icons such as items and faces to secure a place for these in history.

For these reasons this is why I have chosen this artwork. I like that he used a popular person Elvis and put his pop art twist on him turning him into eight western Elvises ready to draw his weapon, I think this means that he is a dependable hero for America to lean on. Warhol uses high and low art through his artwork giving it a desirable product. During the sixties his art was very distinct and powerful which in turn Warhol gained mass popularity, and people that had known him had been driven away from him due to his success.

In 1968 a woman that worked for Warhol on occasion found him and shot him in the stomach, stating that “He had to much control over my life” (Art). He survived the gunshot, but was injured horribly and was required to wear a bandage on his stomach for the rest of his life. After this incident Warhol returned to the art world creating some more of my favorite art because of the way that he uses colors on the faces of American icons such as Marilyn Monroe, Mr. and Mrs. JFK, even Jimmy Carter, Mick Jagger, and Elvis. After the assassination attempt he also began publishing a magazine called “Interview” which is still published today.

This magazine was dubbed as “The Crystal Ball of Pop (Interview. com) due to Warhol’s style of running the magazine, Andy would take pictures of famous people or items and by adding his color schemes he would make the entire magazine look like his art. A portion of this magazine is still dedicated to Andy’s style of work. His hard work ethic led him to many art shows getting his work extensively in museums and galleries around the world until he died during a gall bladder procedure that was deemed a safe procedure.

His work of almost forty years has secured his position as one of the most influential talents of all time, and one of the greatest artists in the world. Warhol grew up with tough conditions leading to his confused life and very awkward personality type, these factors contributed to his choice of being a homosexual and his ambition of wanting to only make rich people richer by putting their pictures in the art world for more people to look at this is why he did so many self portraits. He wanted everyone to remember what he did and to this day I would say he made a big impact. 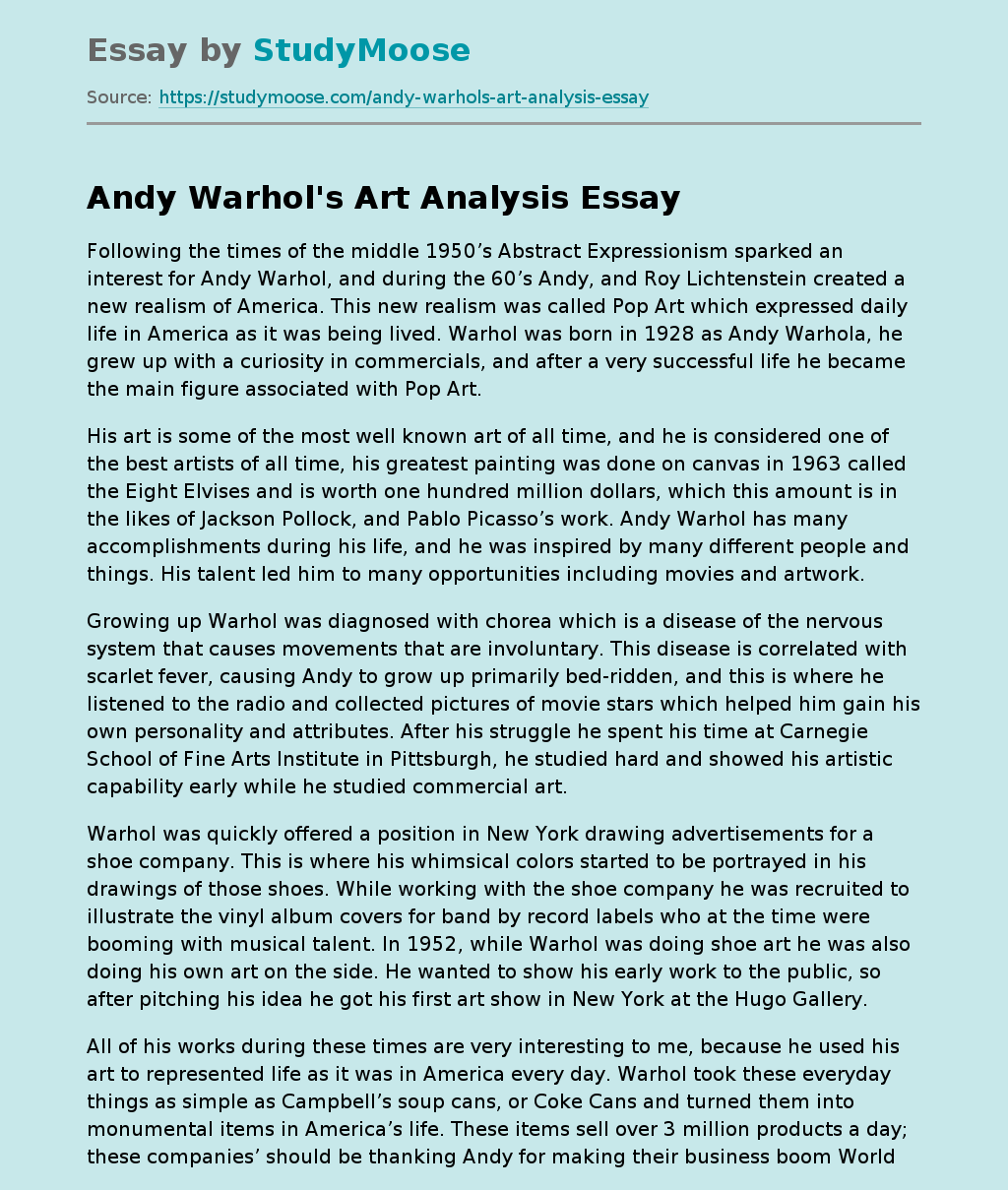