Edgar Allan Poe believed that a short story should be written to create a single effect. He believed that every detail or incident of the story should contribute to the effect. The overall effect of “Hop-Frog” is the theme of revenge that is seen throughout the story. There are certain details and situations in the story that add to creating this effect.

At the beginning of the story, Poe shows us how Hop-Frog has been mistreated by the king just to get a laugh, and how the poor dwarf just puts up with it, again and again.

Don't use plagiarized sources.
Get Your Custom Essay on Analyzing Single Effect “Hop-Frog” Just from $13,9/Page

He does this when he forces Hop-Frog to drink wine [http://search.targetwords.com/u.search?x=5977%7C1%7C%7C%7C%7Cwine%7CAA1VDw], even though it makes him almost mad. However, Hop-Frog gets his idea for his own “jest” for the masquerade party. He explains every detail of his plan to dress the king and his advisors up as the Eight Chained Ourang-Outangs.

When the part about covering the men with tar is mentioned, the reader may become suspicious, as this seems a little bit strange. However, the king is none the wiser, and so the men are all outfitted in their costumes. Hop-Frog has planned everything carefully, but no one has suspected anything, which is probably the way Poe planned it. At the masquerade, Hop-Frog appears behind the group of men after pushing them towards the middle of the room and puts his fateful plan into action. Upon setting the men on fire, he has sought his revenge.

Poe develops the themes of revenge and evil throughout the story by setting the stage for a character whom has been mistreated and may just snap and seek their revenge. It becomes obvious that Hop-Frog is this character as Poe describes the king repeatedly making jokes with him as the target.

In “Hop-Frog”, Poe’s single effect is not laid out as clearly as it is in one of his other works, “The Masque of the Red Death.” In this story, there are certain descriptions that make the theme of evil stand out to the reader. 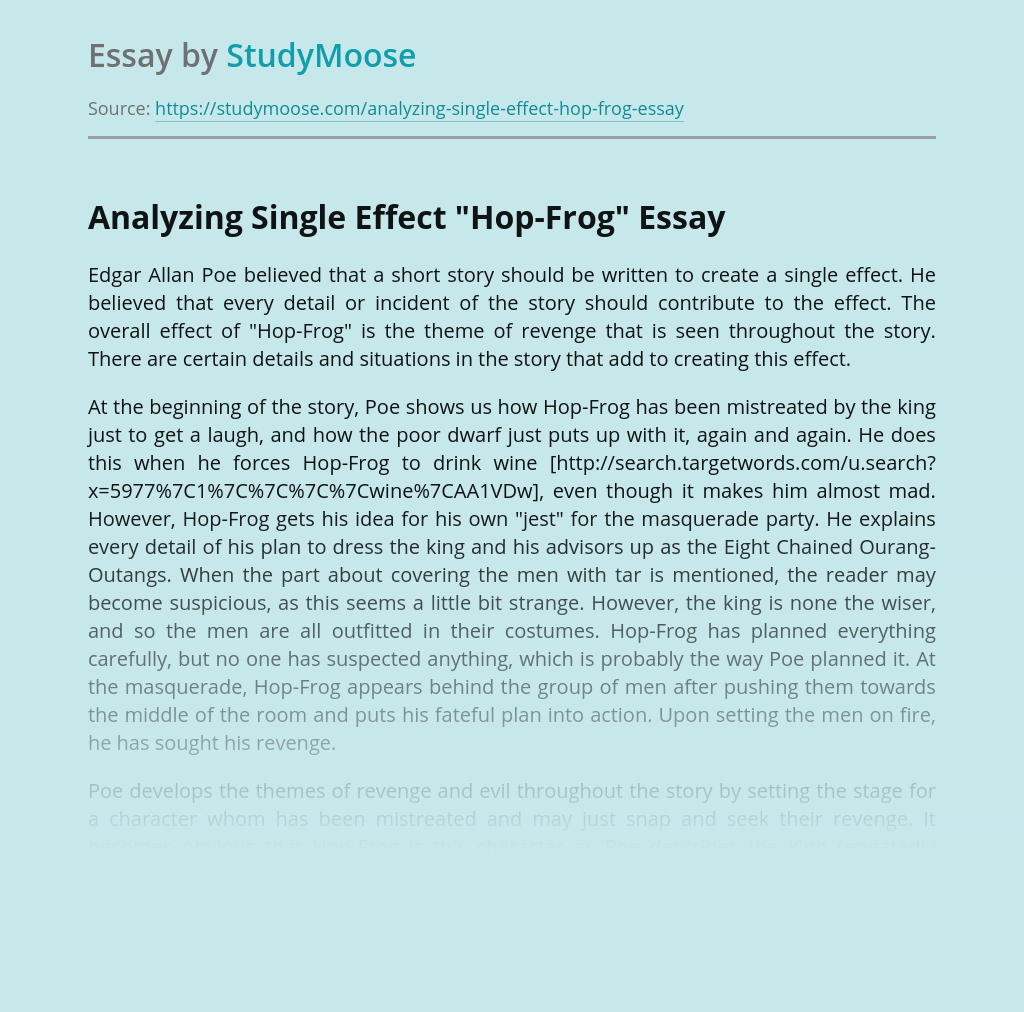 Freudian Allegory Lord of the Flies

The way a person behaves can be analyzed by psychoanalysis showing that there is a structural model of personality; this model was created by Freud. There are three parts of personality: Id which contains primitive instincts, Superego which contains the conscience and Ego which maintains a balance. The Id is based on the principle of...

View sample
Religious Allegory in "Lord of the Flies"

In the novel “Lord of the Flies” we are given an example of what happens when a group of individuals that are proper, well behaved and orderly, are put into an environment where rules and regulations or the ability to enforce them are absent. Although the boys start out with the best of intensions to...

In Nathaniel Hawthorne’s “Young Goodman Brown,” the story is told through the eyes of a limited omniscient third-person narrator. This style is very accommodating to the story because it allows the author perfect opportunities to express his points. The narrator can both describe what Goodman Brown is doing, and also evaluate and comment on the...

View sample
Reflection About Platos Allegory of the Cave

This should already be clear to you: -The shadows of ideas projected on the wall = opinions, illusions. -The wall = the material world seen by us. -Ideas are the basis of reality and not the material world. The most important thing you can do is: ‘ Know thyself’, practice self-reflection, learn more about yourself...

Allegory is a representation of an abstract or spiritual significance through concrete or product types, metaphorical treatment of one topic under the guise of another. To put it simply allegory is a story in words or prose, with double significance. It has a primary or a surface meaning and it has actually got a secondary...