Analysis on "The Merchant of Venice" by William Shakespeare

In life, things are not always what they seem. People may appear to be one way but turn out to be an entirely different. The romantic-comedy, The Merchant of Venice, by William Shakespeare, shows the deliberate use of deception by the characters. Deception is a tool that is used for many purposes. The purposes can be harmful, protective or for personal gain. In The Merchant of Venice, Portia, Jessica, and Shylock are all characters who use deception to carry out their own motives.

Don't use plagiarized sources. Get your custom essay on
“ Analysis on “The Merchant of Venice” by William Shakespeare ”
Get custom paper
NEW! smart matching with writer

Shylock, the hated Jew, makes his living through the practice of usury and uses deception when Antonio asks to borrow money from him. Shylock agrees to lend Antonio three hundred ducats if Antonio is willing to sign a bond that would allow Shylock to have “an equal pound of [his] fair flesh”(I, iii, 145-146). He expresses the bond “in a merry sport”(I, iii, 141) and uses this bond to also show that “[he] would be friends with [Antonio], and have [his] love”(I, iii, 134).

Though Shylock’s description of the conditions in the bond makes it seem as if Shylock does not mean harm, his intentions are to harm and humiliate Antonio. Antonio says that “[he] neither lend[s] nor borrow[s] by talking nor by giving of excess”(I, iii, 57-58) and is willing to do that for his dear friend, Bassanio. At first, Antonio is not blinded Shylock’s friendly pretence, aware that Shylock “is like a villain with a smiling face [and] a goodly apple rotten at the heart”(I, iii, 96-97).

However, in the end Antonio accepts the terms of the bond. The cruel use of deception from Shylock is to help fulfill his intention of revenge against Antonio.

The deliberate use of cruelness in falsehood is also shown in Shylock’s own daughter, Jessica. Jessica runs off with her Christian lover, Lorenzo. Jessica is “asham’d to be [her] father’s child”(II, iii, 17) and describes that her “house is hell”(II, iii, 2). Jessica lies to her father when he asks her what his servant, Launcelot, said to her as he left the house. Launcelot actually told Jessica to watch out for Lorenzo who would be coming by the house later, but she tells her father that Launcelot just said farewell to her. Shylock, of course, trusts his daughter and does not know that she is deceiving him. Another deception by Jessica is when at the night of her elopement, she is disguised as a page boy. She must do this for women are not allowed to be out in the streets at night during the Elizabethan times. While leaving, she steals and gives Lorenzo some of her father’s valuable possessions. Later on with the jewels she stole from her father, her mother’s ring is among them and uses it to purchase frivolous things like a monkey. Jessica’s use of deception causes much grief for Shylock not only because of the stolen jewels and ducats but also the loss of his daughter.

Portia is another woman who is involved many deceptive plots many which occur during the lottery of the caskets. The choosing of the caskets is bestowed upon her from her father who past away. The lottery involves suitors taking the chance of Portia’s hand in marriage. A particular suitor, the Prince of Morocco arrives to take this risk. In this scene, Morocco pleads Portia to “mislike [him] not for [his] complexion”(II, i, 1). Portia tells Morocco that she does not mind the complexion of his skin and that he is “then stood as fair as any corner [she] ha[s] look’d on yet for [her] affection”(II, i, 20). Once he leaves, however, Portia says, “Let all of his complexion choose me so”(II, vii, 78-79). Portia sets an innocent and admirable face when Morocco or any other suitor is choosing the casket, but the minute he leaves, she mocks them; all except Bassanio.

Although this scene shows a cruel deception by Portia, she did it to be polite as was expected of her. Portia uses this deliberate deception further in the play but in a more dignified way. In Act 4 scene 1, Portia dresses as a male lawyer in order to deceive the court and save her husband’s friend, Antonio. She must disguise herself because in Elizabethan times, women were not allowed to participate in law or any other profession. This time, Portia’s deception is not harmful, but is a far more selfless act. Portia sees that disguise is the only method to save Antonio’s life that is very dear to her husband, Bassanio. Dressed as a young lawyer, Portia manipulates the law with her intellect and saves Antonio’s life from certain death by of Shylock.

Shakespeare made use of deception and false face in The Merchant of Venice because it is part of our everyday lives. All three characters deliberately use deception in order to achieve their goal. There are many different motivations for the use of a false face and these are shown in The Merchant of Venice. Whether it is Shylock using it for revenge, Jessica to search for a happier life or Portia to encourage peace, Shakespeare’s use of deception is for the audience to realize that for our own expediency, society takes advantage of the false face.

Analysis on "The Merchant of Venice" by William Shakespeare. (2016, Jul 07). Retrieved from http://studymoose.com/analysis-on-the-merchant-of-venice-by-william-shakespeare-essay 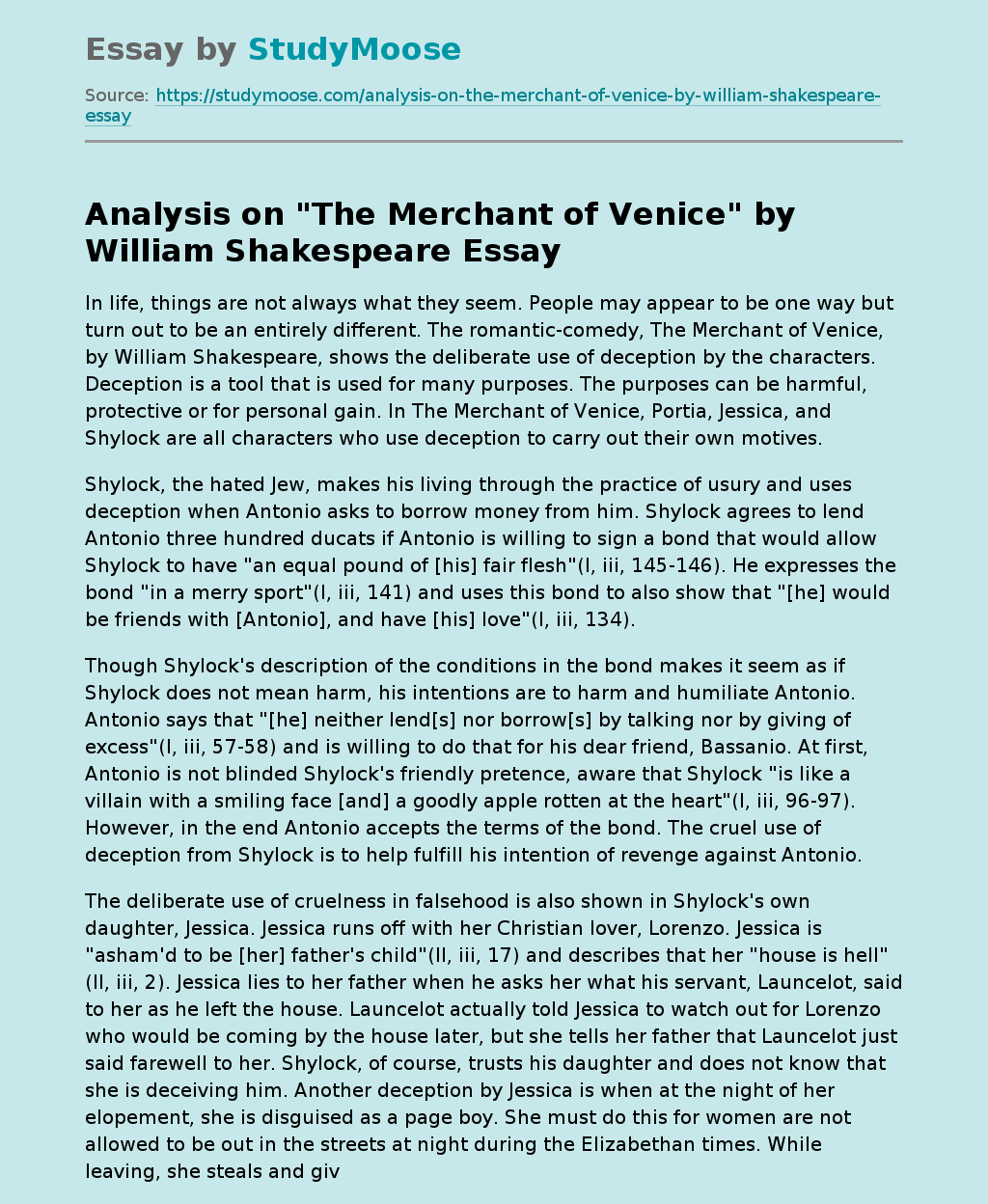