40th president of the United States, Ronald Reagan, in his Inaugural speech claims that America is the best country. Reagan’s purpose is to renew the American spirit. He takes on a patriotic tone in order to instill that we can do anything as a team in the American people. Reagan depicts the pathos appeal in his Inaugural address. He supports this appeal by using diction such as church and God, dreams and hopes, our country and countrymen. He’s letting us know that he’s not just another president being elected, but our family taking office.

Don't use plagiarized sources. Get your custom essay on
“ Analysis of Regan’s Inaugural Address ”
Get custom paper
NEW! smart matching with writer

“It is made up of men and women who raise our food, patrol our streets, man our mines and our factories, teach our children, keep our homes..,” is one example of an anaphora used in Reagan’s address.

It speaks of all Americans not being sectionalized into political parties, races, or age groups but to be looked at as one and one only. “Heroes” is also a phrase of anaphora that shows an underlying strength in his words.

He says that heroes are not just soldiers, but heroes are your next-door neighbors, fellow factory workers, your store-clerks, farmers, and tax-payers, just to name a few. Chiasmus is used here and there in Reagan’s Inaugural Address, for example, “We are going to begin to act, beginning today.” Using this phrase, he really emphasized that we will begin as soon as possible. He paraphrases that tomorrow will not be preserved unless we act today to preserve tomorrow.

He also uses the phrase, “The Federal Government did not create the States; the States created the Federal Government,” to emphasize that we the people are the builders not the product of builders. We as one built the foundation that our country runs upon, the foundation did not create us. “We are a nation under God, and I believe God intended for us to be free,” is a beautiful chiasmus that Reagan uses to tell us that God has plans for us as a nation. Reagan alludes to the constitution with the phrase, “We the people,” in order to paint to us that we are all one people; we are not separated, we have different lives, jobs, opinions, but we are all still one nation under the U.S. Constitution.

He also paraphrases Winston Churchill by telling us that he did not take the presidential oath with intention of presiding over the dissolution of the world’s strongest economy. Ronald Reagan’s Inaugural Address was not only a speech that he had to give, but a speech that tells us, the American people, that he will do his best as a president to instill in us that as a nation we will conquer all obstacles in our way of life. In his Address, he does his best to liven our spirit and just be proud to be a part of the American nation. 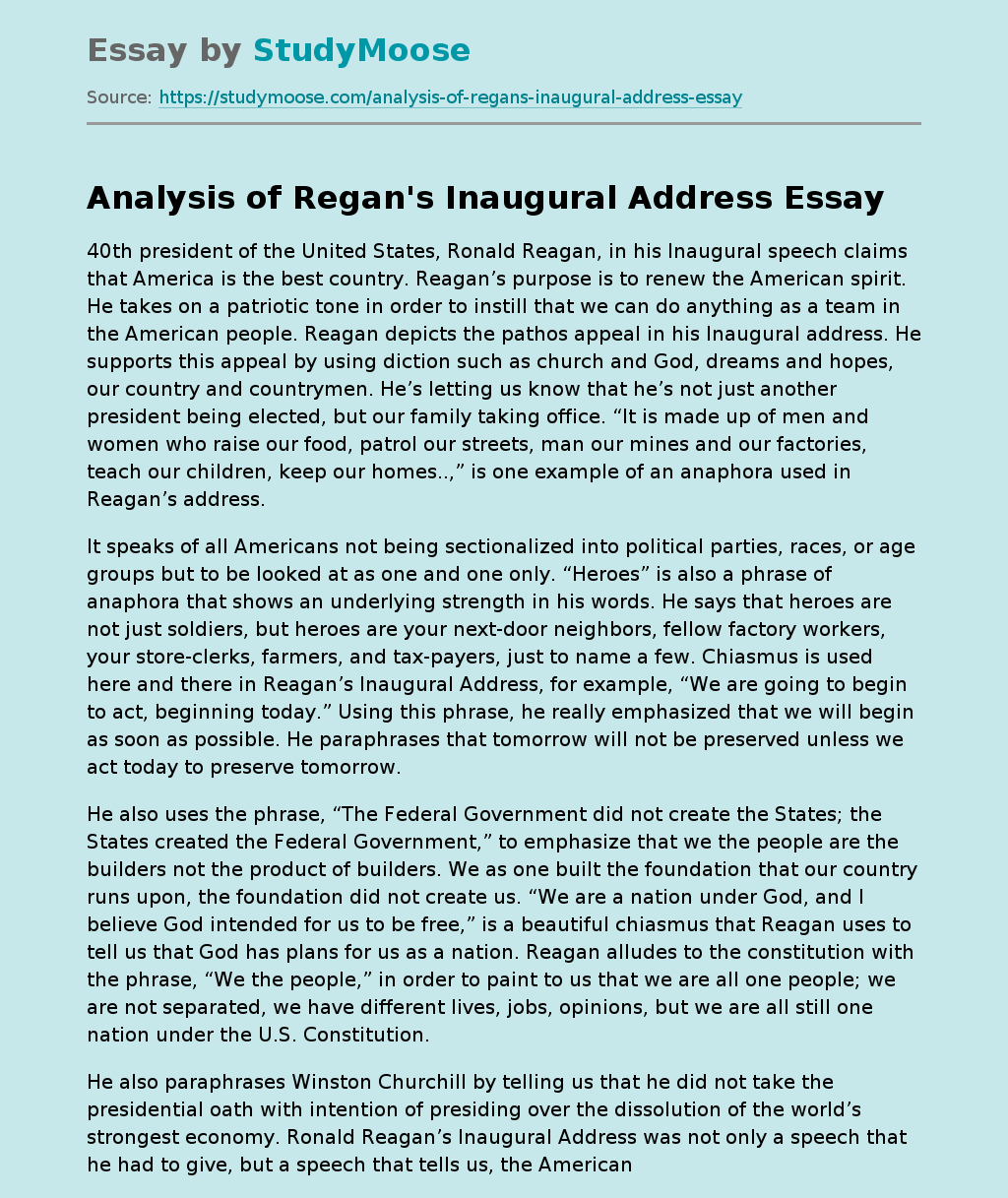