The text under study is taken from the book “The Complete Short Stories of L.P. Hartley” written by L.P. Hartley. Leslie Poles Hartley, an English novelist and the son of a solicitor was educated at Oxford’s College and for more than twenty years he was a fiction viewer for magazines. He wrote a lot of novels and made a great contribution to English fiction. “W.S.” was published posthumously in 1973. The genre chosen by the writer dictates the adoption of the certain style.

The genre of this text is the short detective story.

When we read this story, we learn everything from the author, so here we can observe the author’s point of view. This excerpt is very interesting from the form of narration: it is not homogeneous because the narration is often interrupted by the inner monologues and by the elements of description. Because of the big amount of such elements, the form of narration is descriptive.

Also we can observe non-personal direct speech. The main character of the story – Walter Streeter – gets one after another four postcards with messages from anonymous and starts thinking them over. His reaction on these postcards changes from the first to the last one. At first he was glad not to answer because he had a lot of things to do and the answering on such postcards required too much time and energy.

But he was shocked and astonished about it, so he got rid of the first and the second one.

Moreover, these postcards lingered in his mind and he pondered over the anonymous. He couldn’t understand who it was – a woman or a man because the handwriting and style of writing were extremely different. If the first postcard was about Walter Streeter’s personal features of character about his grip with people, the second one told that he was on the border of something. Walter Streeter had the difficulties with his work and he needed a new source of inspiration. After the receiving the third postcard he paid an attention on the initials of the sender.

They were like his own. Walter Streeter even thought that it was he by his own who sent these postcards. The man went to his friend to ask for advice and after the conversation he felt reassured for a moment. He thought that it was a woman, who had somehow taken a fancy to him and she was a lunatic. Walter Streeter couldn’t destroy this postcard as the previous one, because they became the leading factor in his life. But after the fourth postcard the wave of panic surged in him and he even wanted to go to the police to protect himself.

The author depicts very peculiar characters. The main hero is Walter Streeter, a novelist. While reading this excerpt we get the information about him and it may be said that the author tries to thrust his opinion on the readers. We feel some sympathy to Walter Streeter from the author’s descriptions. About some features of this character we learn only from these anonymous postcards. Mr. Streeter is usually friendly but sometimes critical. He is interested in Scotland and cathedrals. This man is conscientious, he is not a man to experiment with acquaintances and he is ready to escape into an ambiguous world, where the conscious mind didn’t have things too much its own way. These facts we know from some inner monologues, thoughts and feelings which are imperceptibly interwoven with the narration.

The author uses such device for us to better understand this particular character and to show his full portrait. The next character is W.S. Only from the very end of the story we find out that W.S. is William Stainsforth, the character of Walter Streeter book. Walter Streeter didn’t endow him with some good features; he got some fun of this character and made him just nasty as he could. While writing the book about W.S., Mr. Streeter unloaded all his self-dislike on him. So W.S. decided to kill his creator. The author uses a gradation to create tenser atmosphere and to show that W.S. is coming nearer to Walter Streeter. This gradation can be observed in the end of the text of the postcards with word “handshake”. From the first till the last the “handshakes” were “A handshake, a firm handshake, a hearty handshake, a hard handshake”.

It shows the significance of these postcards. This extract is full of stylistic devices. First of all, there are many interrogative sentences and it shows the hesitation and anxiety of the character. We can observe here such stylistic devices as zeugma – “took up the time and energy”, metonomy – “faint strings of curiosity”, personification – “growing pains”, periphrasis – “conscious mind”, “little mouse-like creature”, “poison pens”, a lot of examples of inversion. Also the author uses a lot of anaphoras. It is used widely to improve emphasis on some facts: “Perhaps they didn’t have their feet on the ground. Perhaps he was ready to escape…” Another type of repetition which is called anadiplosis is used: “…into an ambiguous world, a world where the conscious…”

Besides we can meet such epithets in the text: “November fire”, “other-wordly”, “handshake from W.S.”; some metaphors such as “fruitful conflict”, “I’ve been re-reading your novels, living in them”, “a borderline case”, “lingered in mind”. A beautiful antithesis as “perfection of ordinariness” doesn’t let us calm to Walter’s style. As we see the language of the writer is very rich and full of various kinds of stylistic devices. It makes the story vivid, bright, interesting and picturesque. In conclusion I want to say, that this story tells us about the life of writer but it is unusual because of its mysterious detective plot. This story was interesting for me because of exciting plot, specific characters, incomprehensible end and lively language of the writer.

Analysis of Hartley's Short Story WS. (2016, May 17). Retrieved from http://studymoose.com/analysis-of-hartleys-short-story-ws-essay 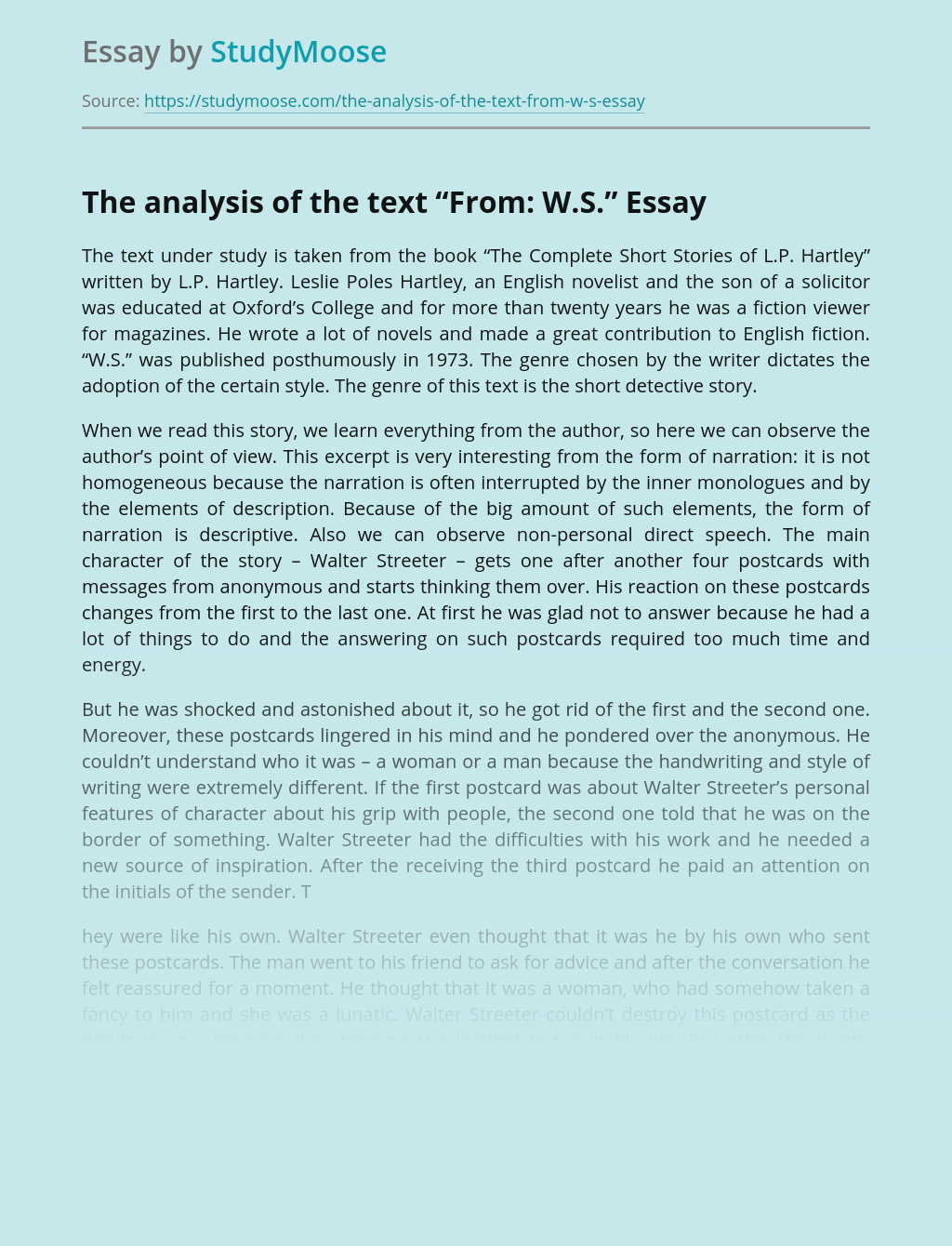