Analyse Obamas Speech Back to School

Essay: Barack Obama´s speech ”Back to School”
A good education is important for the society. If you have a good education, you can get out of poverty and break the social heritage and thereby help yourself and the society. This is some of the things Barack Obama enters in his speech. The speech was given at Wakefield High School in Arlington, Virginia on September the 8th in 2009. The sender is Barrack Obama – the president of the United States of America.

Don't use plagiarized sources. Get your custom essay on
“ Analyse Obamas Speech Back to School ”
Get custom paper
NEW! smart matching with writer

The speech is composed in a classic way! First comes the opening. “Hello everyone – how’s everybody doing today?”(P.

Proficient in: Back To School

1 l.1) Here Obama already tries to get at the same level as his audience, despite his status. Then he tells some background information’s about his own childhood and schooling. Then all the argumentation comes and he makes it clear what the point of the speech is. At the end he sums up the main points, and makes the importance of an education quite clear for the students. This “construction” makes it really easy to follow and understand the speech and this is very impotent, when he is addressing the speech to younger people.

All along Obama don’t speak academically; he is really trying to reach the young audience. Obama makes good use of the classic Appeal form in his speech. He uses among other ethos that combined with his presidency gives reliability. Pathos he use, when he gives examples from his or Michelle Obama’s own childhood. Such as in line 76-78 “Neither of her parents had gone to college, and they didn’t have much. But they worked hard, and she worked hard, so that she could go to the best schools in this country.” He appeals to their feelings by saying that she came from hard conditions, but despite this she did well. It is the good example he gives.

On page 3-4, he gives examples of a girl who could not speak English, when she started school. And a boy with brain cancer, and a girl that grew up in one of the toughest neighborhoods. But because they fought for what they wanted, they managed well. He tries through the good examples to say that you can break the social heritage and that everything is possible. Obama uses logos during the entire speech as he appeals to common sense with his audience. Like when he in line 49 says that “You can´t drop out of school and just drop into a good job. You’ve got to work for it and train for it and learn for it.” When he says that you must have an education to get a good job and that you have to work for it. This is already something people know, he just confirms it! Throughout the entire speech he repeats two words again and again in the beginning of a sentence: ”I know… ” and “I expect …”. He use “I know” when he is referring to his own life; a pathos speech construction. He use “I expect” when he use logos and this gives his words more substance, because you get really focused on the things that are repeated. So those two examples are used to get the audience to really understand his messages and what he expects. But also that he have been in the same place as them, so he knows their feelings.

Obama is in his speech talking a lot about responsibility. He is talking about, that teachers, parents and the government have a responsibility to support and help the students to get an education. But it will not make a difference, for as he says, “you as a student do not take responsibility, for your own education”. With this he puts a lot of pressure on each student and this does not help when he in line 166 says “don’t let us down- don’t let your family or your country or yourself down”. There is a lot of pressure in this because he almost gives them the responsibility for an entire country. He encourages them however by saying that “Every single one of you has something you’re good at” (l.36). And, that no matter what goal they set themselves in life, they must work hard for it, because not everybody succeeds on the first try. This he supports by giving examples of famous people like JK Rowling and Michael Jordan who have failed many times before they succeed. He uses a quote by Jordan in line 130 “I have failed over and over and over again in my life. And that is why I succeed.” He recognizes that some people have it worse than others because of their financial status, their looks or ethnicity, but “That’s no excuse for not trying” (line 86-87); a value typical for Americans.

Obama is also talking about the American dream, which is based on the idea that you can ​​create your own happiness and future, captured in line 89
“Here in America, you write your own destiny. You make your own future.” Like the American frontiers from the early 20th century, where every man had a dream about starting a new and better life. Obama’s intention with this speech has been to convince and motivate the students to stay in school and work hard for an education, because this is so important for their future. The intentions have also been to encourage the students to take action, take school seriously and take responsibility for their education. By using different rhetorical techniques such as repetition, appealing to the emotional, using a line of questions and leveling himself with the audience, he achieves some very convincing arguments. He is addressing himself to his young audience with empathy, and reveals his own story to them which helps making the distance between him and his audience smaller.

I think Obama has made a fantastic and inspiring speech. A speech that is extremely well composed to the audience, using ethos, pathos and logos in a brilliant way, securing that his messages and the mission with his speech comes out in a very motivating way, even today! I also believe that Obama is very well aware that his speech is public and not only for the student audience, in the way that he appeals to all, the students, parents, the government and the entire nation.

Analyse Obamas Speech Back to School. (2016, Mar 22). Retrieved from https://studymoose.com/analyse-obamas-speech-back-to-school-essay 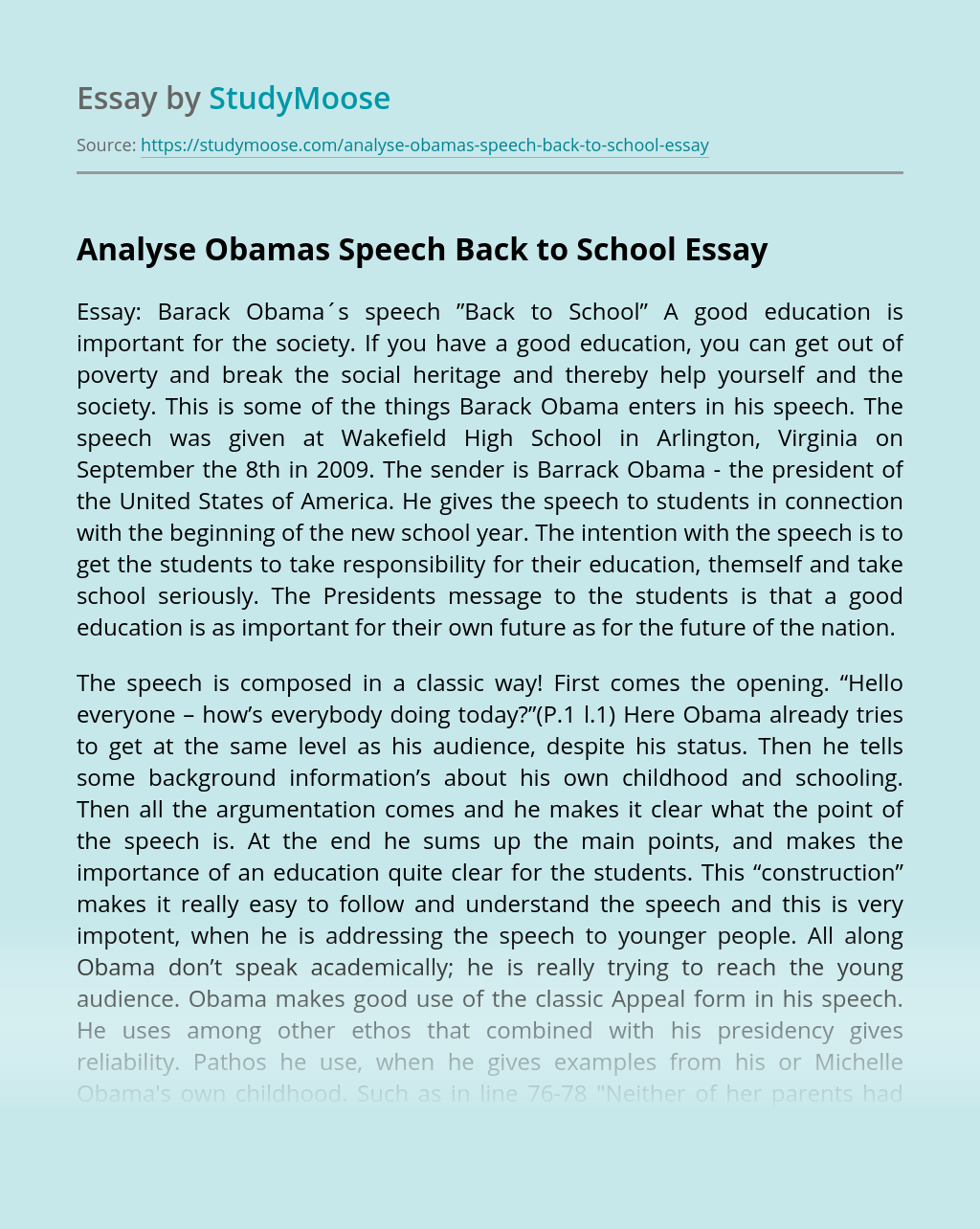