An Inspector Calls by J. B. Priestley: Characters Analysis

He is the protagonist of the story. He is the moral compass of the text who calls all theculprits to task for their crimes. He is strong in his speech and direct in his approach.

Hetalks separately to each member of the family and coerces them to confess to theirrespective fault. In the end, he gives a rising speech to the guests asking them to helpothers in need rather than gloat in their wealth and pomp.

He is the man of the house and very protective about family name and honor.

Don't use plagiarized sources. Get your custom essay on
“ An Inspector Calls by J. B. Priestley: Characters Analysis ”
Get custom paper
NEW! smart matching with writer

He isselfish and does not want to help other people. He has strong hatred toward socialistsand poor people. He also likes to toot his own horn as exemplified by his louddeclaration of his impending knighthood. He shows severe lack of empathy for Eva evenafter knowing about her death. He is quick to blame others for any bad occurrence likehis own son Eric.

She is the elusive victim in the story.

She may the same woman or three differentwomen. She is abused by Arthur for asking her labor rights and Sheila for being honestin her opinion. She is used physically by Gerald and Eric, getting pregnant by Eric in theend.

However, the worst of her setbacks comes from another woman Sybil. When at hermost desperate stage, she goes to Sybil’s charity for aid; Sybil mistreats her and turnsher out empty-handed.

She is the wife of Arthur Birling and as callous and selfish as him.

She turns down Daisy’s appeal for help and even lies about her meeting with her. She worries about thereputation and honor of her family even if it means devaluing another person’s life ordeath.

She is disapproving of her children, Sheila and Eric for their irresponsible andreckless attitude.

She is sympathetic and forgiving. She accepts Gerald dalliance and offers him a secondchance. She is also sympathetic with Eva who she considers a victim of her family sdisregard and selfish arrogance.

She is strong in her opinions and is able to speakagainst hate and impudence of her parents. She is not materialistic and values humanlife and aspirations over materialistic greed.

Eric is a conflicted personality. He feels sorry for his treatment of Eva and tries to helpher. However, he decides to steal money form his own father to do so. He is also analcoholic and his guilt only worsens his condition. He is destroyed on hearing aboutEva’s suicide and takes it the hardest out of all the characters.

He is the fianc? of Sheila. He is empathic man who confesses to his affair with DaisyRenton. He is also helpful as shown by his treatment of Daisy when she is attacked byanother man.

He tales responsibility for his actions and is determined to work withSheila on their relationship. He is also strong in his views as he goes against his family’srejection of Sheila’s family.

An Inspector Calls by J. B. Priestley: Characters Analysis. (2019, Dec 11). Retrieved from https://studymoose.com/an-inspector-calls-by-j-b-priestley-characters-analysis-essay 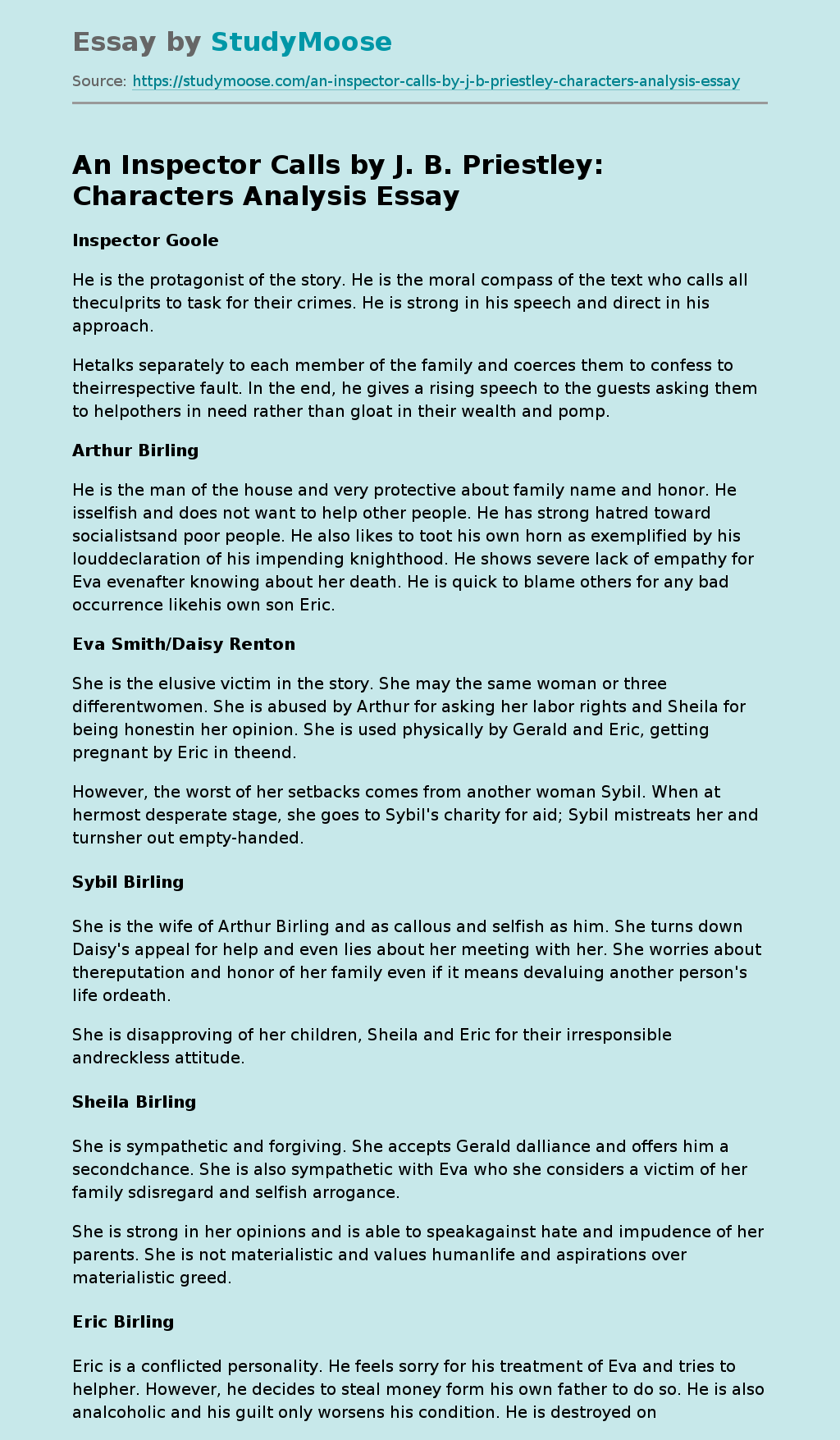