The Role of an Inspector in Play 'An Inspector Calls' by J.B Priestley

It’s his responsibility. Mrs. Birling’s behavior to the Inspector is quite rude and also what she says. ‘If I was, what business is it of yours? ‘ At this the inspector replies quite severely, ‘Do you want me to tell you in plain words? ‘ This shows that he does not stand impertinent and arrogant people. The Inspector leaves Eric Birling for last, as he is the father of Eva’s child. He had met her at the palace bar and then entered her home in a drunken state.

Don't use plagiarized sources. Get your custom essay on
“ The Role of an Inspector in Play ‘An Inspector Calls’ by J.B Priestley ”
Get custom paper
NEW! smart matching with writer

The Inspector is well aware of this and he feels that it is his job to remind Eric, of what he had done.

‘Remember what you did- just used her up for the end of a stupid drunken evening, as is she was an animal or a thing, not a person. No you won’t forget. ‘ This is one of the harshest things he has said, in order to make the Birlings realize that they had done great damage to Eva and nothing they do will make Eva come back.

They all used her, and then pushed her in to committing suicide. This makes the audience feel that, he must be a friend or a relative, for a person who feels so strongly for Eva Smith and felt that she went through a great amount of un justice.

The way that J.B Priestley wanted the actor to present the character of the Inspector is shown through the stage directions; through the actor’s appearance and the way he acted.

The way that the Inspector made an entrance, shows an immediate impression of massiveness, purpose and solidity. This is shown through his physical appearance and the way he behaves. This is proven in the text as: ‘The Inspector need not be a big man but he creates at once an impression of massiveness, solidity and purposefulness. He is a man in his fifties, dressed in a plain darkish suit of the period.

He speaks carefully, weightily, and has a disconcerting habit of looking hard at the person he addresses before actually speaking. ‘ The Inspector is also seen as an influential person, particularly for Sheila. We can also see how he uses his tonal voice and body language, to command those who don’t listen; he gets an immediate reaction, of silence. ‘(Taking charge masterfully)’ and ‘stop! ‘ This at once causes the Birlings to be stunned in to silence. The Inspector uses his tone, to control the behavior of the Birlings; ‘(very harshly). ‘

If the Inspector is trying to make the Birlings realize what they had done and how they should be repentant and guilty; he portrays it through his voice. i. e. ‘(Rather savagely to Birling. )’ ‘You started it. ‘ And ‘(massively) Public men, Mr. Birling have responsibilities as well as privileges. ‘ This is because he wants Mr. Birling to realize what he did was wrong and that he was the root of the problem and that he has to realize this in the fight against status and class differences. Priestly uses his stage directions to make the play come alive.

So that the reader experiences the situations in the play, and also to visualize the appearance of the character and how he should appear on stage. This makes the story more realistic and helps the audience to take part in the play. In the opening speeches of the play, we see that Mr. Birling mentions a variety of things in what he says. Many of them seem to be not true; furthermore, what he believes will happen in the future events seem to turn out wrong. Therefore we – the audience see Mr. Birling as an unreliable and questionable character. Events that Mr. Birling gets wrong are:

We know that the Titanic sank on the 15th of April 1912; however Mr. Birling believes that the Titanic is absolutely unsinkable. ‘The Titanic – she sails next week – forty six thousand eight hundred tons… and unsinkable, absolutely unsinkable. ‘ We know that World War 1 happened in 1912 and that World War 2 happened in 1945, however Mr. Birling was wrong again. ‘You’ll be living in a world that’ll have forgotten all these capital versus labour agitations and all these silly little war scares. They’ll be peace prosperity and rapid progress everywhere.

The Role of an Inspector in Play 'An Inspector Calls' by J.B Priestley. (2020, Jun 02). Retrieved from https://studymoose.com/the-role-of-an-inspector-in-play-an-inspector-calls-by-j-b-priestley-essay 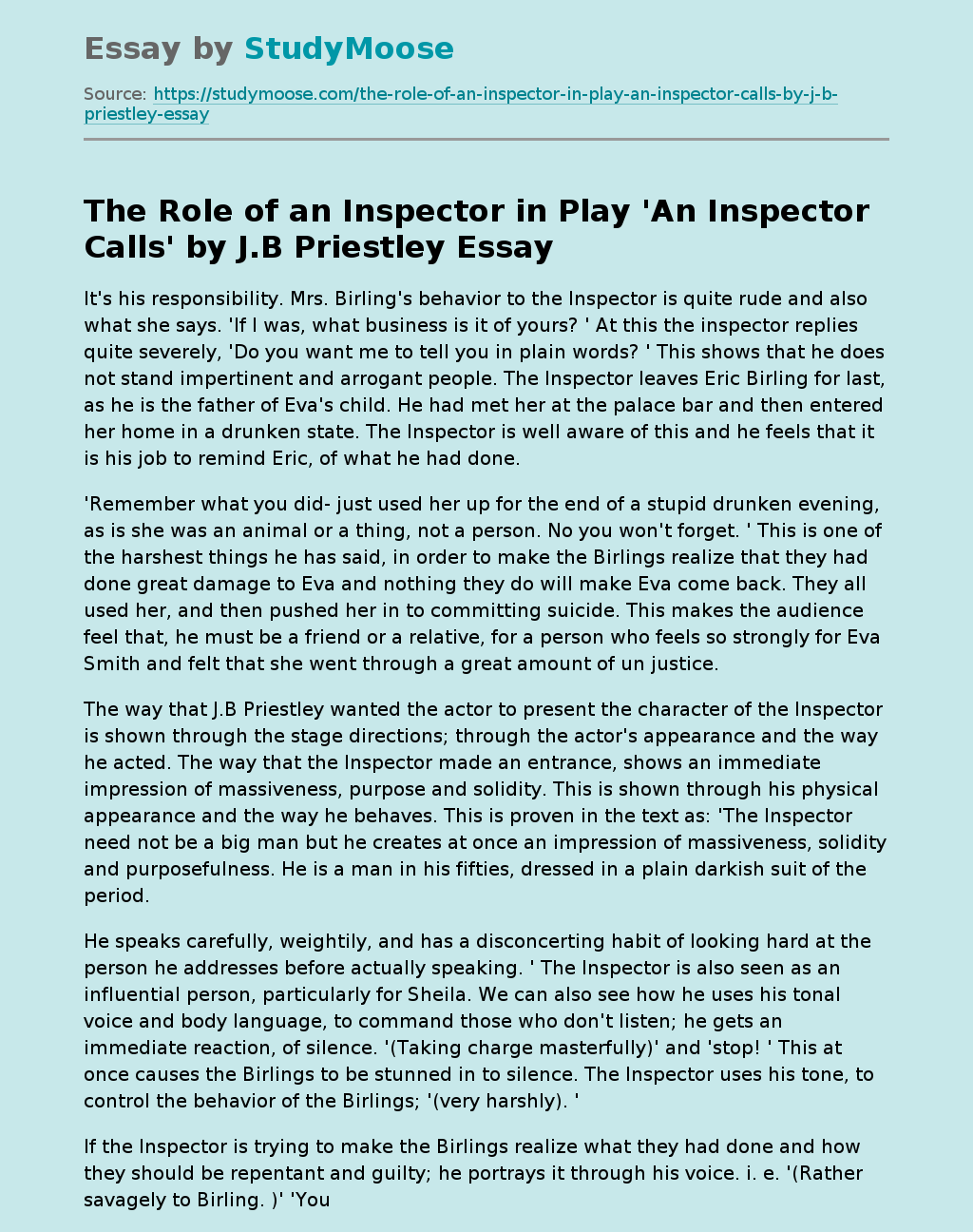