An Essay on Vanity

“Mirror, mirror, on the wall, who’s the fairest of them all?” this ever so famous line quoted from Disney’s Snow White and the Seven Dwarfs sticks to the back of our minds more often than expected. Modern day witches gradually start to emerge in our world with the same intention, or shall we say insecurity, as the witch in the fairy tale – to have the satisfaction of being on top. Nowadays, more and more people, especially teenagers, begin to look in the mirror to see if they are satisfied with themselves.

Don't use plagiarized sources. Get your custom essay on
“ An Essay on Vanity ”
Get custom paper
NEW! smart matching with writer

Vanity, which is being worthless and futile, causes this. When an individual feels worthless, he becomes insecure because he feels that he is not “worth it,” regardless if it’s true or not. This leads to even more troubling problems like fitting in the “in crowd,” attaining high self-esteem and self-confidence, and finding one’s true identity.

The feeling of worthlessness or simply called vanity leaves teenagers to have the craving to fit in.

Proficient in: Self identity

When one feels that he is not worthy, he seeks the attention of others and he feels that he needs their approval. What happens after this? Then, he tries doubly hard to fit in the “cool crowd” by wearing the trendiest clothes, saying the coolest lines, and doing the meanest things. This may make him one of the “cool people,” but this evidently doesn’t’ make him commendable. Another common thing for trying-hard-to-fit-in teenagers to do is start the hazardous habit of smoking. Their very own peers may well become their very own adversaries because they are the ones who pressure them in taking up smoking.

Eventually, these vulnerable teenagers lose their self-image in exchange for a place in the “cool crowd organization.”

Being a teenager is indeed a very difficult part in the cycle of life. It can ruin your self-esteem and self-confidence in a second. For example, cool kids pick on the insecure ones for the fun of it. These kids laugh at nerdy-looking teens and snicker at try-hard-to-fit-in ones. Usually, the ones being laughed at and looked down upon are the ones having problems with vanity. Their sense of futility plus the kind of attention they get from others decreases their self-esteem to zero, thus, causing their self-confidence to drop. This shouldn’t be the case. The vainer a person is, the more he should do something about it, and the more he has to believe in himself.

In extreme cases, adolescents alter their very own persona just to please others. An evident example of this would be teens who steal so that their peers won’t think of them as inadequate. They would rather be called “conyo” than be of the standard class. The question here is why do they have to steal? People who steal aren’t contented with what they have that’s why they make use of other people’s belongings and mark them as their own. By doing this, they would gain attention because their peers would commend them on the objects that they stole, which usually are expensive and classy ones. This is one of the persona alterations that vanity can cause. These common Dr. Jekyll and Mr. Hyde type of teens are pretenders. They live their lives superficially, pretending to be somebody that they’re truly not.

This is a real problem among adolescents. Since they are on the stage where they are able to intellectually contrast themselves with others, they feel that they should show another personality aside from their own so that they wouldn’t have to worry about people’s reactions to their true personality. They cover their faces with masks to keep others from finding out their true identity and to protect themselves from rejection. Because of their insecurity, they may never be able to find their true selves. They should take out their masks and show the world their true selves so that people may accept them for who they are, and not for who they are trying to be.

To all those teenagers with problems regarding vanity and insecurity, you should be able to face your own fear of rejection so that you wouldn’t be living in a superficial world. Be brave enough to bring out your true identity because you should always give yourself a chance to prove that you are indeed “worth it.” They say that it is not because things are difficult that we do not dare, it is because we do not dare that they are difficult. So dare to face your fears and dare to be true to yourself for it is only then that you would find inner peace and self-confidence.

An Essay on Vanity. (2016, Jun 27). Retrieved from https://studymoose.com/an-essay-on-vanity-essay 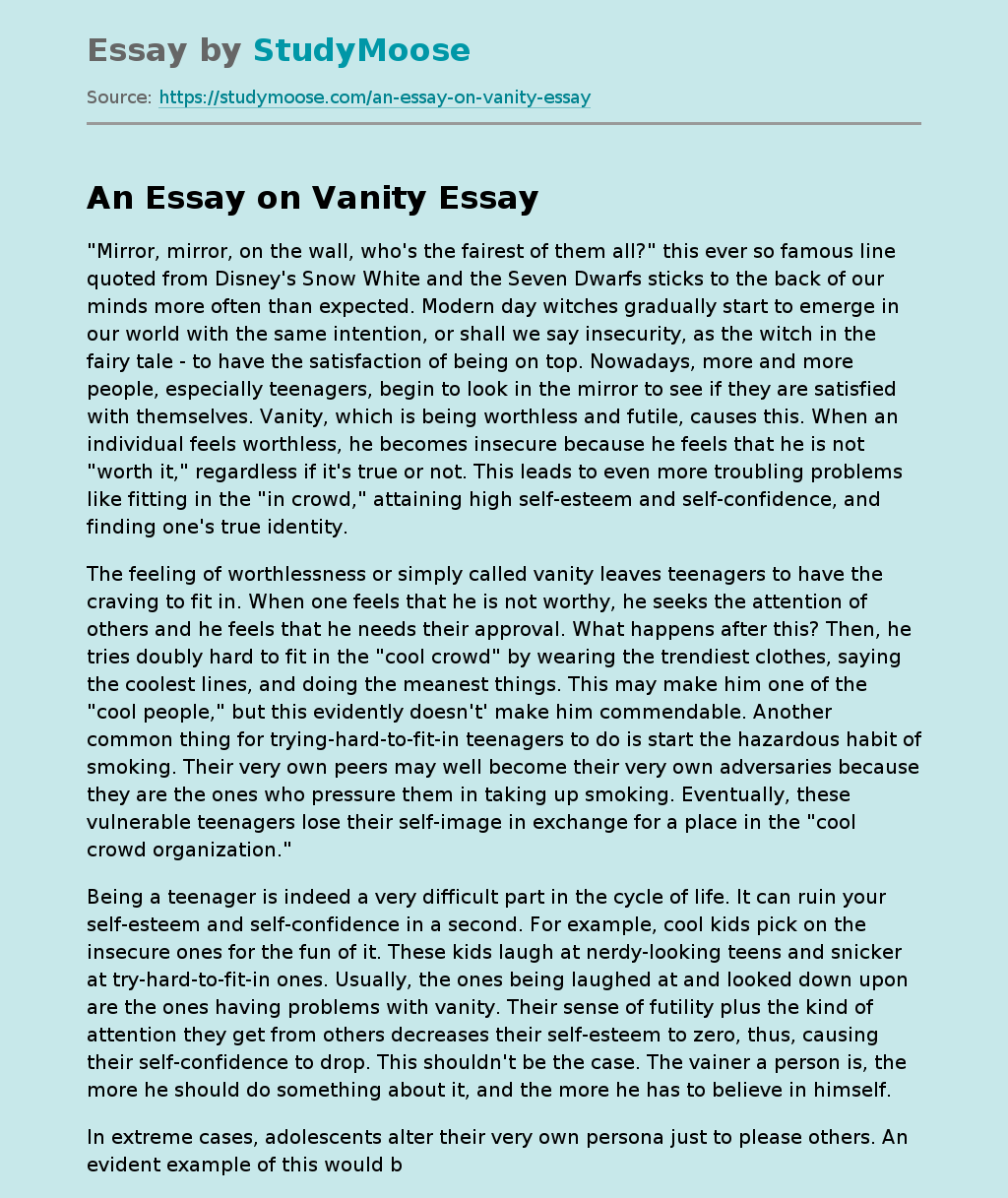