Vanity Fair: A Novel Without a Hero

In his novel Vanity Fair it is Thackeray’s intention to create a canvass where all the characters are vain. The intention is announced in the subtitle, which reads “A Novel Without a Hero”. There is no character in it with heroic qualities to admire, and we search in vain for a reference point of virtue by which to compare the rest. It is not Thackeray’s intention to explain why certain people are vain, or to provide a lesson in how to live honestly, or even how to uproot such hypocrisy and vanity from society.

Don't use plagiarized sources. Get your custom essay on
“ Vanity Fair: A Novel Without a Hero ”
Get custom paper
NEW! smart matching with writer

A broad satire on Victorian England

We must take the novel as a broad satire on Victorian England and the Utilitarian ethos that was overcoming urban society at the time. Both the principal characters Amelia Sedley and Becky Sharp are utterly vain, even though in wildly different ways, and coming from diametrically opposed circumstances. It would be futile to search for the source of their vanity in financial or social circumstances.

Thackeray seems to have given us a gallery of rogues, but it is not utterly gratuitous either.

In the end it is a broad satire on a new order of society that has sprung up in the wake of the industrial revolution, based on self=-centered aspiration. Becky Sharp seems to be the biggest scoundrel of them all, and we find the ready explanation for this in the fact that of all the important characters in the novel her background is the lowest. The principle that shapes her life can be found in the following utterance: “I think I could be a good woman if I had five thousand pounds a year” (Thackeray 204).

She is convinced of this, but we are absolutely sure that on five thousand a year Becky would be a worse person than then without.

Nevertheless, such a principle helps to feed her vanity, helping her to scheme relentlessly against everyone she comes across. Having befriended the genteel Amelia, she is able to roam the upper echelons of society, and therefore is constantly on the prowl for a moneyed husband, employing her feminine charm generously. There is no one she takes pity on. She abandons her husband in his time of distress and dallies with an ages philander for the sake of some jewels. She abandons her own child when it becomes a burden to her. She poisons her best friend’s brother for a life insurance windfall. There is no doubt that she is the murderer of Joseph Sedley. ) She even betrays her best friend Amelia by planning to elope with her husband while he is in combat in the Battle of Waterloo. We might judge others in the novel to be saints beside Becky Sharp, but this would be hasty. Becky is what she is due to her lowly background. This is not to say that she is vain and crafty, but coarsely so. The vanity of those in higher stations of life has more subtlety and finesse, but we shouldn’t say that they are less vain. If Becky is sharp, Amelia is sedate, but not less vain for it.

Her father is a wealthy businessman, and her elder brother is making good way in the East India Company. Her circumstances being far more secure, she has no need to be a conniver and huntress in the mode of Becky. Instead she is obsessed with herself and her romantic attachments. She has an infatuation for George Osborne, which she mistakes for love. She is so preoccupied with her dreams regarding him that she fails to notice that he is flirting with Becky. On the other hand William Dobbin has genuine affection for her, and is a saint compared to the outright cad who George is.

But Amelia fails to take any notice of him whatsoever. She marries Dobbin in the end, but even then makes no effort towards reconciliation, and Dobbin realizes to his dismay that she is too vain for any sort of reciprocity. Our initial impression was that Becky is the worse of the two, but this assessment is open to revision. Closer examination reveals that they are both utterly vain, but the vanity is channeled in different directions. Becky thinks that she is intrinsically good, only that she needs a certain amount of money before she can settle down in her virtuous character, and this is her vanity.

Amelia is preoccupied with herself and doesn’t know who her friends are, or what is good for her, and this is her brand of vanity. Becky has poor parents and a lowly background, whereas Amelia is used to wealth, and this is enough to explain the difference between the two. Becky does Amelia at least one good turn; she tries to convince her friend that Dobbin is the one who really cares for her. We strain ourselves to find a good turn that Amelia does to Becky, or to anyone else in the novel for that matter.

Who is the worst character among the two

It reopens the question as to who is the worst character among the two. In conclusion, Vanity Fair is a novel peopled with vain characters, and it is inadvisable to seek economic or social circumstances to explain their hypocrisy or wickedness. Thackeray shows us that vanity springs from all strata of society, and therefore is something inherently human. Of the two prime protagonists of the novel, one is poor and the other rich. And yet we discover them both as vain, their different backgrounds making them vain only in different ways.

Vanity Fair: A Novel Without a Hero. (2020, Jun 02). Retrieved from https://studymoose.com/vanity-fair-a-novel-without-a-hero-essay 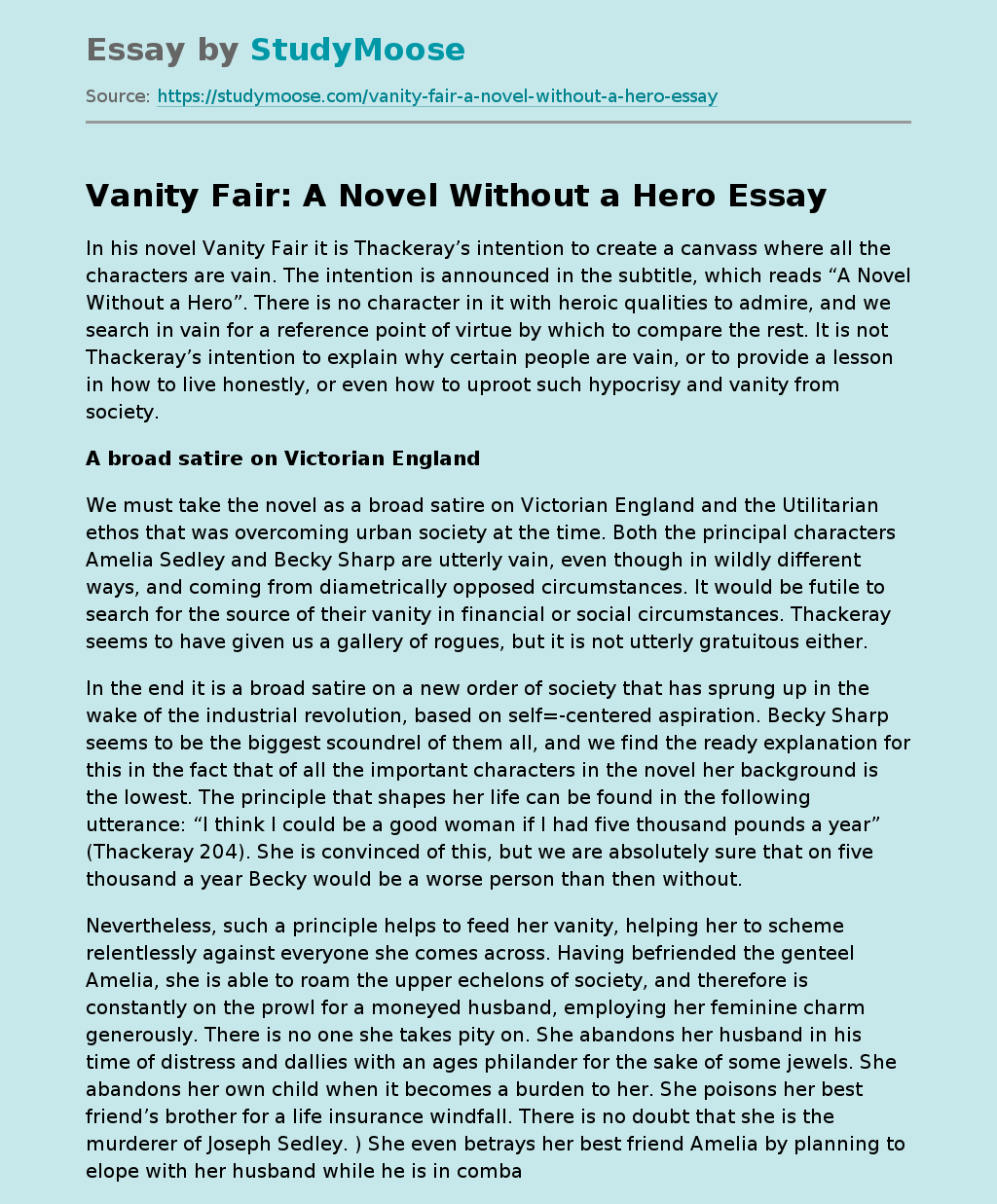