An Argument Against Corrado and Cohen's Theory of Political Terrorism

Don't use plagiarized sources. Get your custom essay on
“ An Argument Against Corrado and Cohen’s Theory of Political Terrorism ”
Get custom paper
NEW! smart matching with writer

In most cases it is dominant, aggressive males who hold positions of power in either the political, economic, or military arenas, and who manipulate events to suite themselves, e.g., Hitler, Stalin, Mussolini, and in more recent times, Slobodon Milosovic. Those that fight against dominance and aggression, I believe should be called revolutionaries. For example, the Irish Republican Army.

The North of Ireland harboured a protestant streak of dominant, aggressive males, who in attempt to hang on to power, unleashed the horrific events of Bloody Sunday, and many other uncalled for acts of aggression.

These acts where sanctioned by politicians, in both the North of Ireland and England, who acted in conjunction with both the Royal Ulster Constabulary, and the British Army. On Bloody Sunday, the British soldiers deliberately aimed and killed young men, they believed most likely to be members of the Irish Republican Army, at the peaceful, albeit illegal, demonstration. “…all the deceased where men, and nine of them were under the age of 25.

” It was an effort to stop what has almost come to pass. A fair assembly of politicians, who represent all layers and fabrics of the society. The event is still under review. The actions of the Irish Republican Army has eventually destroyed the positions of power that the dominant, aggressive males abused. But do not believe that we should label those who fought for a better life as terrorists. People who put their lives on the line for true justice, I believe should be referred to as a Revolutionaries.

We are exposed to new conflicts now, almost on a daily basis, and no two situations are ever identical. This makes the breakdown of a typology extremely difficult. The typology which defines “political terrorism”, according to Corrado and Cohen, has eleven different categories, in order to encompass all of the different situations. These typologies may be useful in a security setting, but in order to get to the bottom of the problem, I believe that rather than complicating the issue with many meanings, it should instead be simplified and attributed to one of two choices. Either acts of dominant aggressive personalities, for selfish gain, or for the achievement of human rights. It does seem that most of the state terrorism, would fall into the category of actions by a dominant, aggressive male, whereas the majority of anti state terrorism can be attributed to actions of revolutionaries seeking justice. A good example of this perhaps could be the recent events in E. Timor. Taken one step further, we could distinguish all actions as either taken for personal gain or selfish motives, or actions taken from a spiritual base, which concerns itself with the furthering of humanity through acts of genuine, long term initiatives for peace and harmony. And which sometimes requires revolutionary tactics.

This discipline, along with history, sociology, psychology, and political science, struggle to structure the chaos in our world, in an attempt to bring understanding and closure to the problems that threaten to destroy us. In history actions of the dominant, aggressive males speak for themselves, for example, WWI and WWII. One would be hard pressed to deny that if you look for a conflict, anywhere in the world, 99.9% of the time, a male leader, along with others males in positions of power, are most likely responsible. This trend extends far into the past. Like Israel for example.

“…the process of terrorism is in a constant state of change… Typologies may increase our understanding of terrorism, but each terrorist incident must be understood in its specific social, historical, and political circumstances. Under these conditions, Crozier, Bell, Wilkinson, along with Corrado and Cohen, struggle against insurmountable odds, to conclusively define terrorism. Many of these methods for classifying or identifying different forms of terrorism have categorised, and eased understanding. For example, Crozier devised six types of terrorist groups ranging from right-wing fascism, to revolutionary left-wing behaviour and anarchy. It is a much simpler typology than that put forth by Corrado and Cohen.. Corrado and Cohen’s typology does not, as Crozier does, make reference to a pathological group. I agree with Corrado and Cohen, and believe that there is no room in a terrorist definition or typology, for mental illness.

Although I view many dominant, aggressive males as sick people, categorizing them as pathological, is more a reflection of the system that enabled them to get into power in the first place. For example, Hitler wrote and spoke about outrageous acts of racism that should have categorized him as mentally ill, but rather the system failed and he progressed into a dictatorial leader who was partly responsible for WWII. I use Hitler as an example because he typifies the rarity of a dominant, aggressive male acting alone. Hitler was surrounded by dominant aggressive males that helped him to further his ideology.

Crozier’s typology is much simpler than Corrado and Cohen’s. But Crozier’s typology has made the work of security much easier by hinting at the background and goals of terrorists. For example, a neofascist movement would most likely include some sort of ethnic cleansing such as we witnessed in WWII and the Jews. A minority nationalist group however, would be striving for a different political system or changes to a system that they see as unfair. This understanding can prompt a different kind of security response. The downfall of Crozier’s typology is that it has become dated, and I find it is too vague in that each of the six categories, could indeed have sub categories, that would be more specific, such as Corrado and Cohen’s typology.

As it is explained in the book “…the nature of response is determined to some extent by the structure of the group causing the problem.” Bell sets out six types of terrorism in an effort to simplify what response would be necessary. In Bell’s typology he includes acts of the mentally ill, such as the psychotic. And, again I disagree that this category should be included. However, I do find that Bell’s definition of revolutionary terror, is perhaps is the most descriptive of actions that I would consider taken for just cause. He uses words such as organizational, allegiance, functional, provocative, manipulative, and symbolic gestures to explain the forms of revolutionary terror. But these words do little to arouse a feeling of dominance, and aggression. Instead, it seems to me, they invoke a structure to classify the underlying actions of a revolution. Bell believes that media stories of terrorism, or politicians referring to terrorism, is in fact a reference to revolutionary terror. Bell’s typology is closer in a sense, to Corrado and Cohen, because it breaks down revolutionary terror into different forms, much as Corrado and Cohen have done. Bell suggests, that much like Corrado and Cohen, these types may overlap. His theory is, as was Crozier’s, helpful in security situations because it identifies the reasons behind the actions, such as endemic terrorism, which he describes as internal struggle. I am not sure if the revolutionary type activity described as behavioural change through fear, represents people becoming revolutionaries due to fearful or oppressive regimes, or that the revolutionaries instigate fear in order to bring change to the society.

It must be obvious that some revolutions are necessary in order to bring about a, usually long overdue, change. The French Revolution of 1848, which mirrors the conflict in the North of Ireland in some ways, would today be classified as acts of terrorism. But the people who turned to violence against the government, were called revolutionaries, not terrorists, and I feel this in a way bolsters my opinion that there should be a separation of motives, before we can identify a pure political terrorist act.

In Paul Wilkinson’s typology, I noticed he also included an area of criminal activity linked to terrorism, which I previously mentioned disagreeing with. Wilkinson agreed however that it is important to distinguish criminal terrorism from their political counterparts. Wilkinson also agrees with Corrado and Cohen that it is important to distinguish between external and internal terrorism. He sees political terrorism in its most common form as internal state power used to frighten citizens into obedience. He sees state sponsored terrorism as a tactic used in international conflict. He also describes nationalist and revolutionary categories, which mean to gain political independence from a colonial power or to change the ethnic composition of an existing government without changing the ideological structure. Or changing the political ideology of a social or political unit. I believe these categories are similar to my theory of revolutionary actions. His typology is not as in-depth or self explanatory as Corrado and Cohen’s typology. But does point to a revolutionary element, which I believe is important to distinguish.

Of all the typologies I prefer Corrado and Cohen’s. It attempts to cover all avenues of violence and also attempts to give the reasoning behind it. Although I still disagree with actions of revolutionaries, such as the IRA, being referred to as terrorism. Corrado and Cohen’s typology does break down areas that have been previously left untouched. Such as formal and informal state terrorism. However, I still believe that all actions of violence today, are generated for the causes set out in my dominant, aggressive male theory. This theory has carried me through many essays, and I still believe, that although it has not been fully developed, it goes a long way in explaining events in our world.

The theory is not a feminist theory, in that it does not believe that all men are dominant and aggressive. Quite to the contrary, dominant and aggressive males are responsible for killing many more men, than women as was evidenced in both the slaughterhouses of WWI and WWII. It is dominant aggressive males that I speak out against in protection of the world as a whole, and not as a female dominated arena. This theory speaks out against any acts of dominance and aggression, and wishes to identify those responsible for these acts, in an effort to stop them from happening. I do not wish to see the world run by women, but I do wish to see dominant aggressive males removed from power, and replaced with men and women whose values include the preciousness of life, and the importance of a non-violent society.

An Argument Against Corrado and Cohen's Theory of Political Terrorism. (2021, Sep 24). Retrieved from http://studymoose.com/an-argument-against-corrado-and-cohen-s-theory-of-political-terrorism-essay 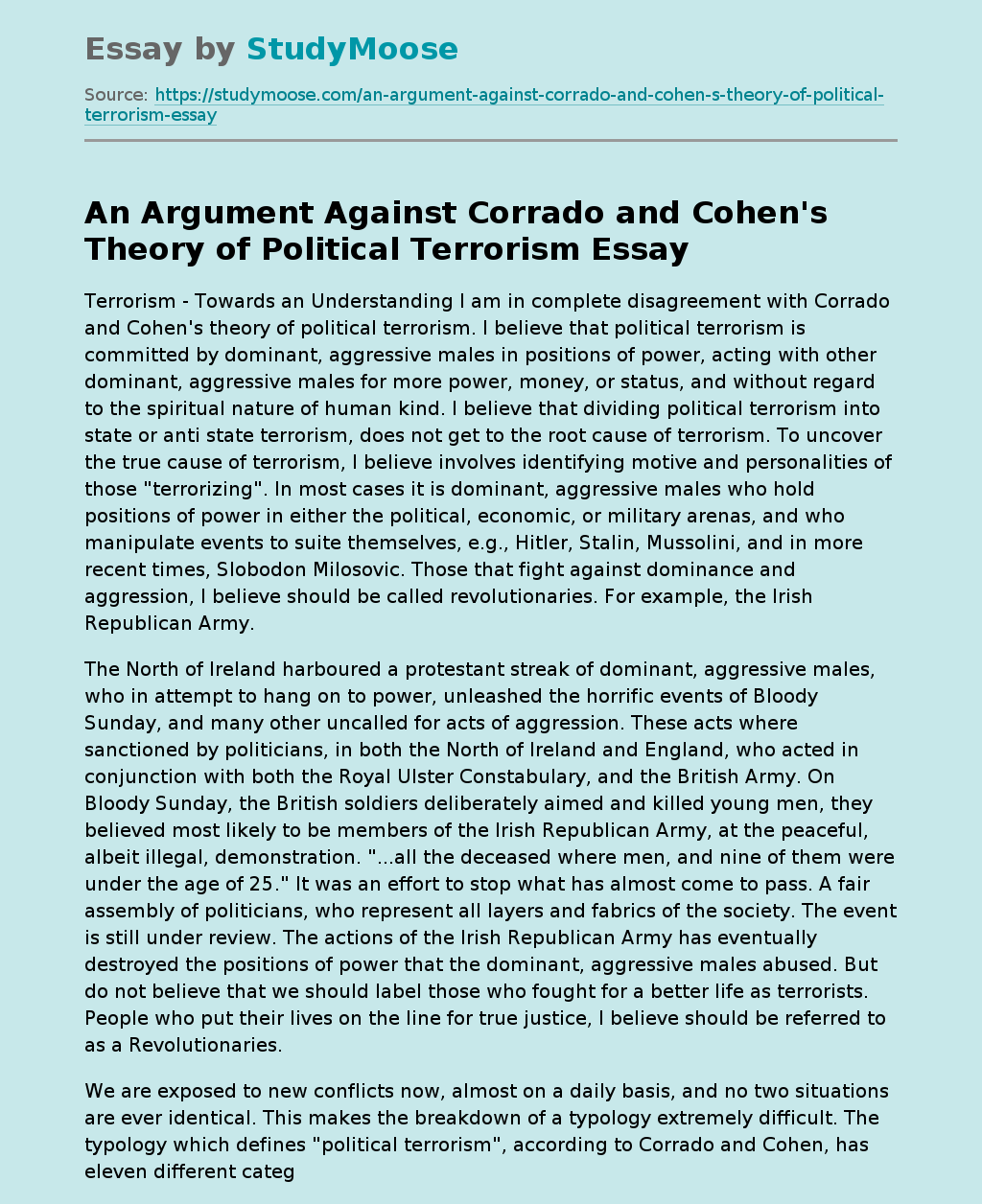