An 18th Century Strait-jacket - Is this a fair description of the Constitution?

According to Ashford and Ashbee (1999), the system of:

“checks and balances have created gridlock. Decisions cannot be made because there is insufficient agreement between institutions. In contrast with the countries of western Europe, the US has, [critics] argue, been unable to impose effective gun control or establish comprehensive health-care provision because decision making requires such a widely shared consensus.”

This gridlock is one of the reasons that some have come to call the US Constitution an “18th Century Strait-Jacket”. Of course there are various sides to this argument that must be explored before a conclusion is reached.

Don't use plagiarized sources. Get your custom essay on
“ An 18th Century Strait-jacket – Is this a fair description of the Constitution? ”
Get custom paper
NEW! smart matching with writer

First, we must put this into its historical context. As a colony of the British Empire, the Americans had several grievances particularly with taxation with representation in the British Parliament, the quartering of soldiers in people’s homes without permission and imprisonment without trial. As a result, many of these issues are address in the Constitution, e.g. “No solder shall in time of peace be quartered in any house without the consent of the Owner, nor in time of war, but in a manner to be prescribed by law”.

Three other main influences on the Constitution were the Declaration of Independence 1776, the Articles of Confederation 1781 and the French philosopher de Montesquieu’s ideas on the ‘Separation of Powers’.

These contributed to the creation of a Constitution that primarily considered protecting the rights of the citizens and preventing either tyranny of one (President) or tyranny of the masses (largest political party). The arguments of critics, however, are that these influences, relevant as they were in the 18th Century, are now ‘neither here nor there’, and in fact, it would be wise to allow either the Executive (in effect the President) or the Legislature (in effect the largest political party) to gain more power, preventing gridlock and indeed allowing either branch of government “to impose effective gun control or establish comprehensive health-care provision”.

“The Senators and Representatives before mentioned, and the Members of the several State Legislatures, and all executive and judicial Officers, both of the United States and of the several States, shall be bound by Oath or Affirmation, to support this Constitution”.

While a literalist may believe that these people must support the Constitution on every occasion, others may suggest that while they should uphold the principles and rules of the Constitution, if they disagree with anything in the Constitution they have the right, from the 1st Amendment’s “freedom of speech” guarantee, to make this public. Therefore, it can be argued that it is, in fact, the interpreters as opposed to the interpreted that makes the Constitution an “18th Century Strait-Jacket”.

Critics argue that the nature of the Constitution creates a situation whereby the Constitution acts as a ‘Strait-Jacket’, restricting Representatives getting on with their work but rather concentrating on upcoming elections. This is can be substantially evidenced as truth but perhaps overall it is an advantage. If the Representatives are constantly looking towards approaching elections they may become more ‘in tune’ with their mandate and give the people what they want rather than what he/she or their party thinks the people should want. Therefore, it can be suggested that this nature of the Constitution is an advantage for the people whose rights the ‘Founding Fathers’ or ‘Framers’ had primarily wanted to protect.

Since the beginning of the American Constitution, there has been a gradual shift of power to the Executive branch of government at the expense of the other two. This arguably proves that the Constitution does not act as an “18th Century Strait Jacket” because it attempted equal powers between the branches. This is shift in power in favor of the Executive – effectively the President – is observed by Feldmann and Richey (2003) in terms of the current President George W Bush:

“American presidents have vied with the other branches of government for power. And in times of war and national emergency, presidents have exercised heightened levels of authority – in some cases openly sidestepping the Constitution to do what they felt was necessary. In the larger battle for power, America’s 43rd president, George W. Bush, seems no different. What is different, say experts on presidential power, is that the open-ended nature of Mr. Bush’s “war on terrorism” is fast creating new realities of executive power, with no firm expiration date. Some question whether the exigencies of preventing future terror attacks are fundamentally and permanently tipping the constitutional balance of power to the president’s advantage.”

Other examples of President’s gradual increase of power can be seen where President Lincoln commanded the barricading of southern ports and raised the amount of US army recruits during the Civil War, all without Congressional consent. Ashbee and Ashford record the development saying:

“From 1945 onwards, successive presidents had responsibility for the US nuclear arsenal. By the 1960s – when the Vietnam War was fought – the president had undoubted primacy or hegemony in the handling of defence policy and national security matters.”

Hence, Arthur Schlesinger Jr described the 1960s as the era of the ‘imperial presidency’. Ashbee and Ashford continued to demonstrate that “Congress – although sometimes vocal in its comments – played a subordinate role”.

Therefore, it can be said the Constitution is not as restricting as critics would lead us to believe because power has gradually evolved towards the President.

It is important also to compare the US Constitution to other Constitution. The British Constitution most notably, is not codified or entrenched. It is much easier to change this Constitution – through an Act of Parliament, a court ruling or an EU law in comparison to the US, an amendment of which requires a 2/3 majority in both houses and the approval of 3/4 of the states. Nevertheless, while Britain may seem to have more ‘power’ over her country than the US’s “18th Century Stait Jacket”

An 18th Century Strait-jacket - Is this a fair description of the Constitution?. (2020, Jun 01). Retrieved from https://studymoose.com/an-18th-century-strait-jacket-is-this-a-fair-description-of-the-constitution-new-essay 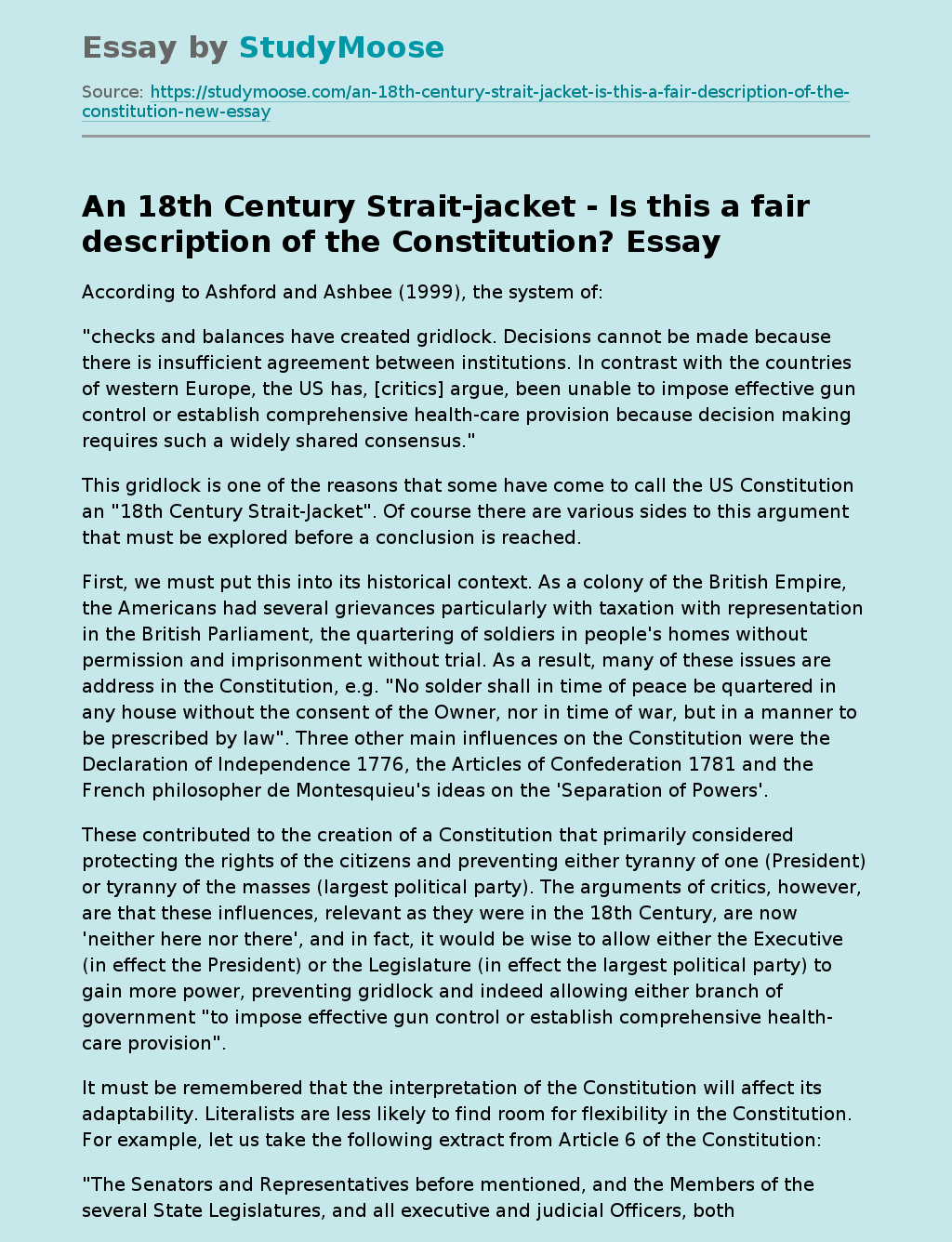