In the late 19th and early 20th century, following the civil war, the United States decided to change its isolationistic approach to expansionism. Many people wanted The United States to become an imperial power and show its dominance to the world. A naval strategist Alfred Thayer Mahan suggested three strategies to achieve such dominance. Mahan’s first strategy was to improve American naval power. His second strategy was to build a network of naval bases to support the American ships. Mahan’s third strategy was to build a canal along the Isthmus of Central America.

Don't use plagiarized sources. Get your custom essay on
“ American Imperialism: Economy, Racism and Religion ”
Get custom paper
NEW! smart matching with writer

The United States government took Mahan’s advice and, in 1890, passed The Naval Act. This act started the construction of the new set of ships to improve America’s naval fleet. After building up a sizable naval force, the United States began spreading its influence to the Pacific Islands like Hawaii and Samoa by starting trade with them. Some of the reasons the Americans used to justify imperialism were economy, racism, and religion.

One of the reasons Americans used to justify imperialism was its economic benefits. Due to Industrialization in the United States, there was a growing demand for expanding global trade. One example of American Imperialism fueled by economic agenda was its annexation of Hawaii. Ever since the United States started to trade with Hawaii, there were some complaints from the Hawaiian natives that American businesses were being unfair with their trade conditions. American businessman that feared that American resentment would affect their business in Hawaii asked American minister John Stevens to cooperate in staging an armed revolt to make Hawaii an American protectorate.

In 1898, Hawaii officially got annexed. Another example of American imperialism due to its economic gains was the Spanish-American war. In the late 19th century, Spain had colonized Cuba. The Spanish treated Cubans harshly and put whoever revolted in reconcentration camps where they were given inhumane treatment. The United States decided to free Cuba from Spain.

One of the ways The United States justified imperialism was through racism. During the late 19th century, there was a lot of controversy in regards The American imperialism. During the time at which the Philippines became The United States protectorate, a poet Rudyard Kipling published a poem called “The White Man’s Burden.” In this poem, Kipling said “take up the white man’s burden” (Kipling). Kipling said the Americans were superior and should take up the burden of taking care of some of the “less civilized” races by imperializing them. Another example justifying imperialism through racism was Josiah Strong’s claims of “… “There is apparently much truth in the belief that the wonderful progress of the United States, as well as the character of the people, are the results of natural selection” (Strong), In this quote, Strong claims that the reason why The United States is so successful was because of Darwin’s Theory of Evolution and that the Americans are more superior out of all Anglo-Saxons.

Another one of Strong’s claims was that the United States was successful, partly due to its civil liberties and that it was their moral duty to pass on those civil liberties to the “less civilized” races. Although Strong’s opinion was shared by many, there were some who opposed him, like William Jennings Bryan, who said, “Everyone recognizes the obligation imposed upon individuals to observe both the human and the moral law, but as some deny the application of those laws to nations, it may not be out of place to quote the opinions of others.” (Bryan). In this quote, Bryan says that imperialism is immoral. Some of the examples listed above were used as a means to justify imperialism through racism. The last reason that The United States used to justify imperialism was religion.

During the late 19th century, American missionaries wanted to spread the word of god to other parts of the world. Josiah Strong believed “…that all men may be lifted up into the light of the highest Christian civilization, are, first, a pure, spiritual Christianity…” (Strong). In this quote, Strong is saying that Christianity is one of the factors that made The United States so successful. Strong claimed that it was the Americans’ duty to spread Christianity to the imperialized territories. William Jennings Bryan, however, opposed that idea by saying “The command “Go ye into all the world and preach the gospel to every creature” has no Gatling gun attachment” (Bryan). In this quote, Bryan claimed that spreading Christianity through violence went against the teachings in the bible. These are some of the reasons how religion was used to justify imperialism.

In conclusion, the Reasons for which The United States started its imperialism were economy, racism, and religion. The United States ended up building up its navy and became one of the leading military powers. The united states started a war with Spain over its economic interests with Cuba and ended up taking over Puerto Rice, Guam, and the Philippines. As a result, The United States proved itself to be a powerful imperial power. 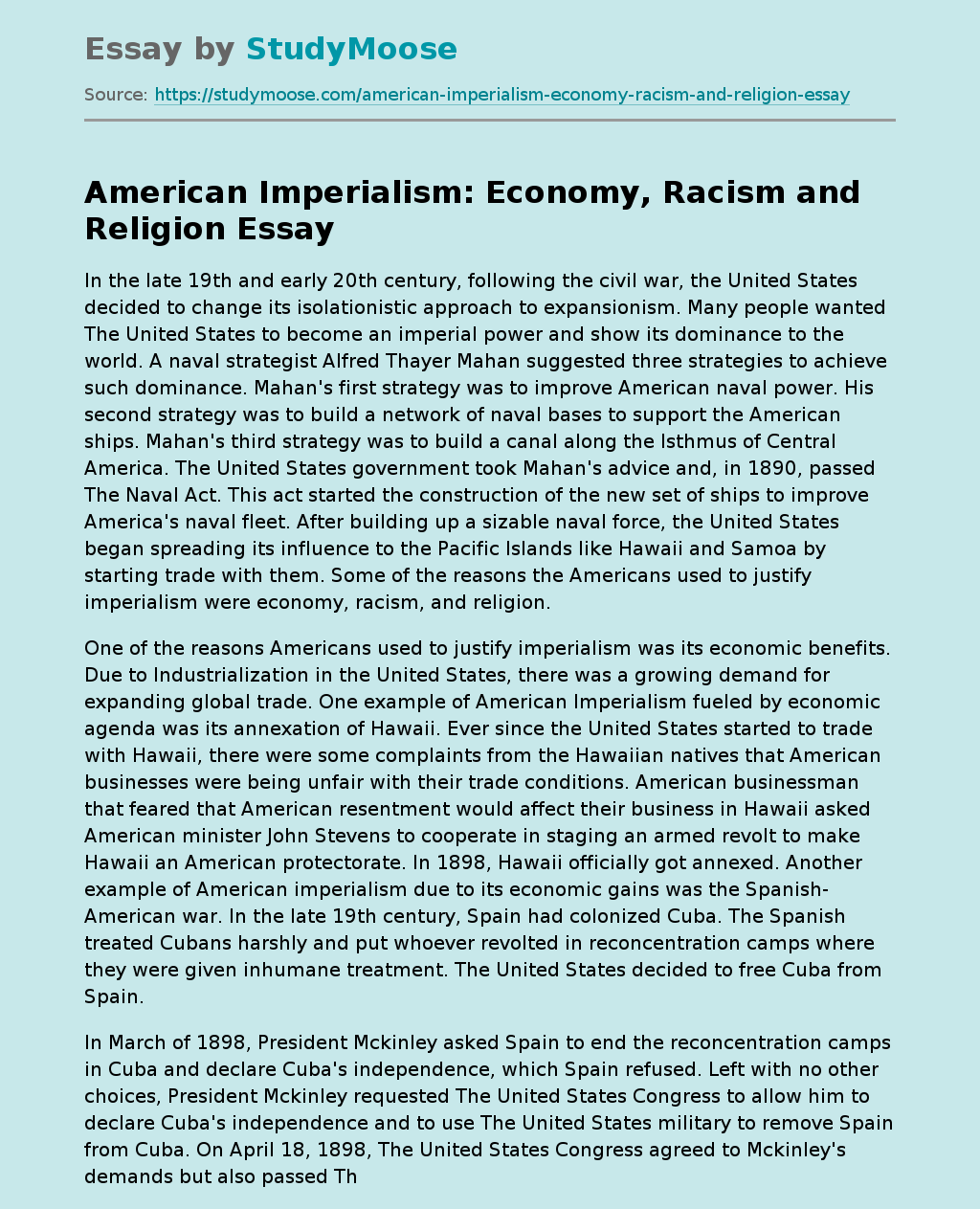