America vs Peace in the World

America first took a step towards greater world involvement due to

As the Americans ventured westward each new move past a frontier was developed on trials of the one before it. Whereas most of the time expansion would be met by other people whom have conquered that land, this was not the case for America, which provided it with a unique opportunity. It was then brought back to the primitive stage as each frontier was advanced upon, giving rise to new forms of government and institutions. The movement of the frontier until there no longer was a line was the main cause of Americanization as America quickly expanded and developed its own ideals apart from that of its mother nation. Americans quickly fell in love with the ideas that they had set in place and started to form imperialistic ideals that it should begin to expand its commercial interests elsewhere into the world.

As American enjoyed continued expansion and development it was then led to greater world involvement due to the belief that it was the duty of the American people to maintain peace in the world. As time progresses from the days of Washington’s presidency to the time of Theodore Roosevelt’s presidency we see an important shift in the foreign policy of the United States. In Washington’s Farewell Address he warned of the involvement in foreign affairs stating, “…a passionate attachment of one nation for another produces a variety of evils. Sympathy for the favorite nation, facilitating the illusion of an imaginary common interest in cases where no real common interest exists, and infusing into one the enmities of the other, betrays the former into a participation in the quarrels and wars of the latter without adequate inducement or justification.” This was the common thought of the time and it was once again exemplified in the Monroe Doctrine during President Monroe’s annual message to the Congress in 1823. “

In the wars of the European powers in matters relating to themselves we have never taken any part, nor does it comport with our policy to do so.” These thoughts of remaining neutral from partaking in foreign affairs remain forefront for the most part up until 1905 when Theodore Roosevelt made a Corollary to the Monroe Doctrine. At this point in time we see the shift in American thinking that it is there duty as a nation to intervene on world affairs in a peaceful way as to promote the welfare of all.

It also goes on to speak of how if other countries are not acting in a moral way that it would be the responsibility of the American people to intervene in the fashion of an international police. “Chronic wrongdoing, or an impotence which results in a general loosening of the ties of civilized society, may in America, as elsewhere, ultimately require intervention by some civilized nation, and in the Western Hemisphere the adherence of the United States to the Monroe Doctrine may force the United States, however reluctantly, in flagrant cases of such wrongdoing or impotence, to the exercise of an international police power.”

These three important historic documents show the shifting foreign policy of America as a nation leading up to and shortly following the Spanish-American war. The consequence of this increased world involvement on the American society was the rising debate over imperialistic ideals and anti-imperialistic ideals. A major turning point in the ideals of American’s was the conquest of the Philippines. It was regrettably that McKinley was forced into war through exaggerated newspaper articles that caused much uproar in the American society and provided a final push towards the United States entering war with Spain. Following the war President McKinley was quoted as saying: “When I next realized that the Philippines had dropped into our laps I confess I did not know what to do with them… And one night late it came to me this way

This caused much debate in the American society and while many agreed that it was the duty of the United States to do as McKinley said, others argued that this imperialistic way of acting was not at all in line with the foundations the country was built on. This was the start of the Anti-Imperialist League. The Anti-Imperialist League argued that “…imperialism is hostile to liberty and tends toward militarism, an evil from which it has been our glory to be free.” They believed that the imperialistic ideal was directly attacking the ideas that were the backbone of the nation for such a long time that it was a crime to believe in them and practice them. Although there was much debate over these topics, America continued onward with its expansion in the years to come.

America vs Peace in the World. (2016, May 12). Retrieved from https://studymoose.com/america-vs-peace-in-the-world-essay 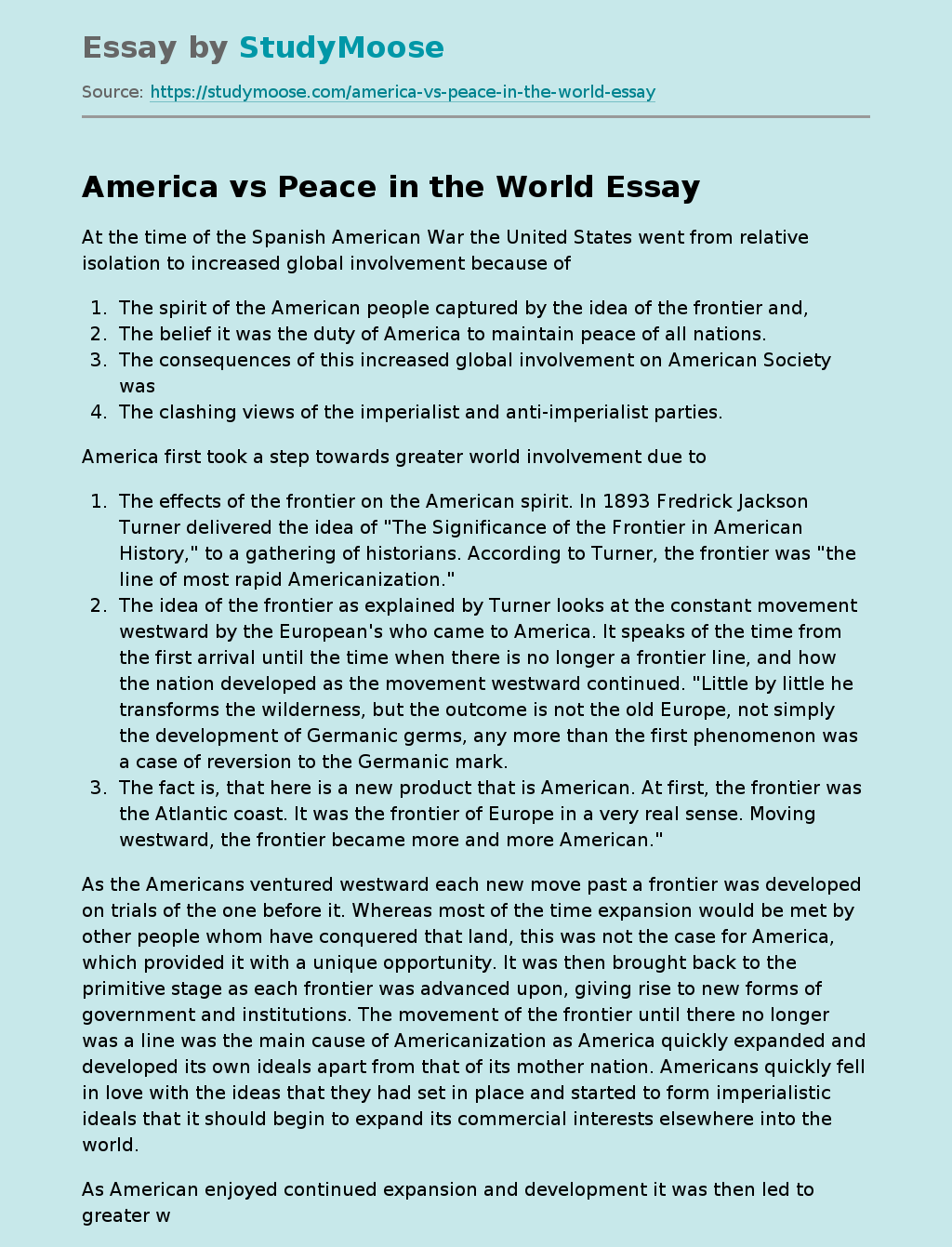