Ambitious For Power in Shakespeare's Macbeth

At the beginning of the play, Macbeth is cautious and somewhat suspicious of the witches.

Don't use plagiarized sources. Get your custom essay on
“ Ambitious For Power in Shakespeare’s Macbeth ”
Get custom paper
NEW! smart matching with writer

He only starts to really think of the idea that they might be telling him the truth when they hail him as the thane of Cawdor, which shortly after, he receives word he has been named. When the witches tell him he will be king he is surprised but doesn’t seriously consider killing Duncan until Lady Macbeth talks to him about it. This tendency to being easily convinced and manipulated shows that Macbeth is weak and has little ambition at the beginning of the play.

Lady Macbeth on the other hand is strong and very ambitious toward the beginning of the play. From the start, she has control of Macbeth. When she read the letter about the prophecies and how Macbeth is coming home soon she immediately starts devising plans to kill Duncan. She isn’t satisfied with Macbeth’s newly acquired title of Thane of Cawdor. Only the crown will please her, and she is quite aware of what must be done to get the crown.

This shows how she has a lot of ambition in the beginning. The fact that she can so easily convince Macbeth that he needs to kill Duncan proves that she is the stronger of the two in the early acts.

Even in the middle of the play, Macbeth is still the weaker of the two characters. When the time comes to execute the plan and kill Duncan he tries to back out. However, Lady Macbeth once again easily convinces him into killing Duncan. He dreads the deed so much that he actually has hallucinations and sees a floating dagger in front of him. The insanity starts to show up around this part of the play in the form of Macbeth’s hallucination and paranoia. It takes a lot of time, and coaxing from Lady Macbeth, in order for Macbeth to be able to gather up enough courage to kill Duncan which shows that he is still weak and lacking ambition.

Although Lady Macbeth is still stronger and more ambitious than Macbeth the killing of Duncan is the point where the gap starts to narrow. She calls Macbeth a coward when he tries to back out of the plan and is the driving force that causes Macbeth to kill Duncan. She also shows strength when Macbeth returns from the murder and she tells him “These deeds must not be thought after these ways. So, it will make us mad”. But when she has to go kill the guards she starts to lose some of her composure. Upon return to their room, Lady Macbeth is just as shook up as Macbeth. This shows how Lady Macbeth mostly talks and starts to weaken when the murders begin and the pressure sets in.
Near the end of the play, Macbeth surpasses Lady Macbeth in ambition, strength, and insanity. He hires people to kill his best friend, Banquo, and his son Fleance because he doesn’t want the rest of the prophecy to come true. However, Fleance escapes meaning the rest of the prophecy can come true. After hiring hitmen to kill Banquo he hallucinates again and sees Banquo’s ghost at the dinner table. He then proceeds to have Macduff’s family killed by murderers just to get back at Macduff for fleeing the country. Macbeth’s peak ambition and strength comes at the end of the play but also do the peak of his insanity. It even goes so far that Lady Macbeth kills herself. The suicide of Lady Macbeth finally makes him realize how far out of control everything has become but it is too late for him to fix anything.

Lady Macbeth’s ambition and strength are lower at the end of the play than at any other time. However, her insanity is at its high point. She keeps to herself most of the time and not only does she not control Macbeth anymore, she barely speaks to him. When they do talk Macbeth barely listens and calls her “My dearest chuck,” a big change from when he previously referred to her as his “dearest partner of greatness”. She is so disturbed by the murders that she talks about them in her sleep. She also sleepwalks around her room trying to wash the blood off of her hands. She eventually gets so guilty and insane that she kills herself.

Macbeth and Lady Macbeth both present ambition, strength, and insanity at one time or another during the play. The difference between Macbeth and Lady Macbeth is that Macbeth gets stronger and more ambitious as the story progresses but Lady Macbeth becomes weaker and less ambitious. All their behaviors progress opposite of each other except insanity. They both become increasingly insane towards the end of the play and it eventually leads to both of their deaths.

Ambitious For Power in Shakespeare's Macbeth. (2020, Oct 08). Retrieved from http://studymoose.com/ambitious-for-power-in-shakespeares-macbeth-essay 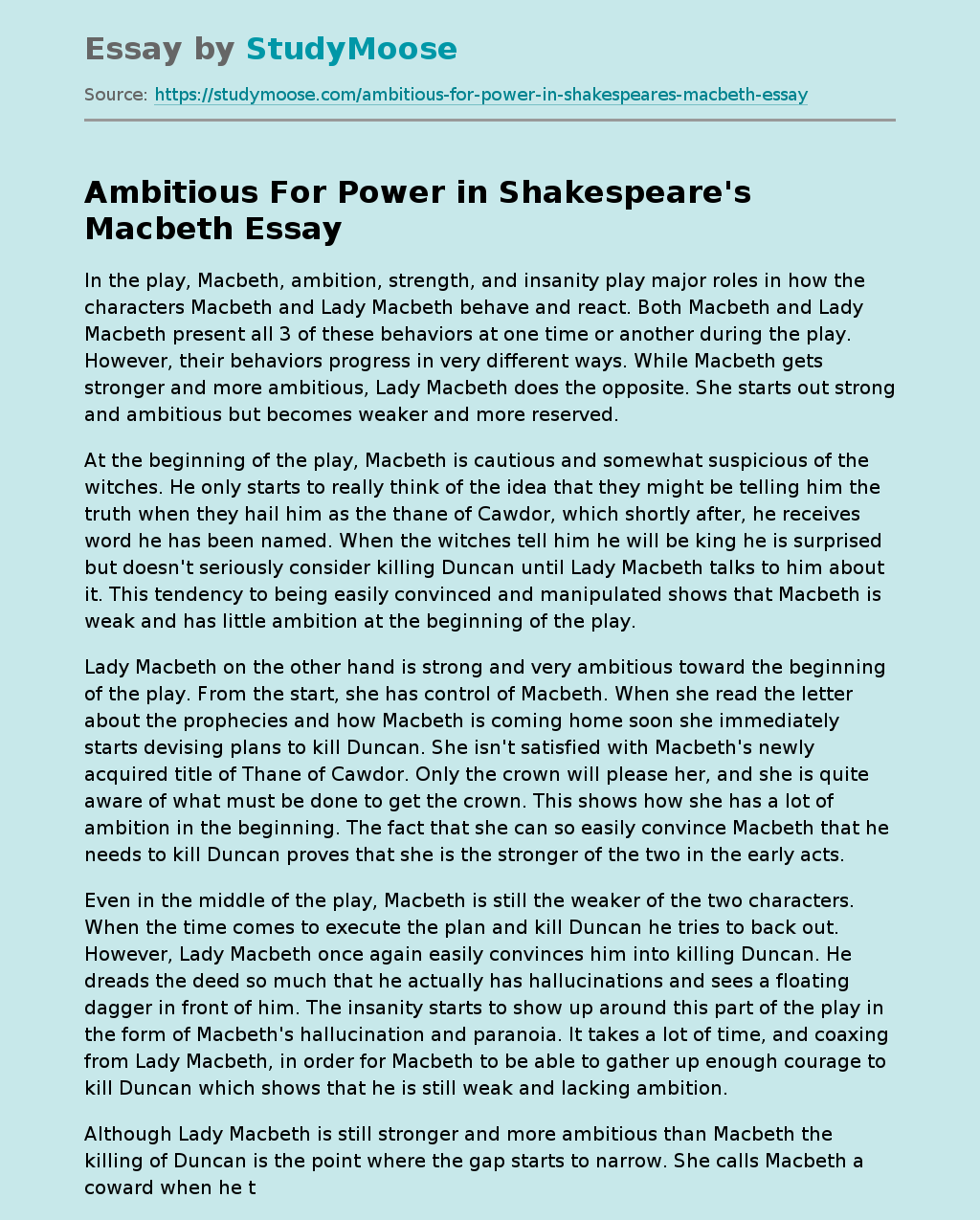