Alzheimer's Disease and it's Stages

Symptoms of AD vary from person to person. Some of the most noted symptoms include difficulties in reading, depletion of memory, personality changes, hallucination, lack of concentration and as the severity of the disease increases, patients become incompetent in performing their daily activities(Lane, Hardy & Schott 2018). Based on the symptoms, AD is clinically classified into three types of AD: mild, moderate and severe Alzheimer’s disease.

Mild AD is the early stage of Alzheimer’s disease, during this time patients, can work independently.

Don't use plagiarized sources. Get your custom essay on
“ Alzheimer’s Disease and it’s Stages ”
Get custom paper
NEW! smart matching with writer

According to Alzheimer’s Association (2016), mild AD is seen in 10 to 15% of the patients around 65 years of age. However, they may have difficulty in remembering names, organising events, socialising, show difficulty in managing their finances, driving, retrieval of new information can be challenging, and family members can also observe changes in their behaviour (Dalvi 2012).

During this stage patients start suffering from dementia; they show symptoms such as impaired judgement, depression, agitation and anxiety.

The accumulation of Amyloid plaques and NFTs cause the nerve cells to be damaged. People with Alzheimer’s become withdrawn and dependent on others for daily activities (Atri 2019; Dalvi 2012).

Severe AD is the most advanced stage of Alzheimer’s individuals show difficulty in communication, and they have trouble in eating, become easily susceptible to infections, loss their physical ability to walk, sit and stand. Finally, patients have difficulty in carrying out their day-to-day activities and exhibit cognitive decline and loss of memory and neuropsychiatric symptoms like hallucinations (Atri 2019; Dalvi 2012).

Even though intensive research is carried on Alzheimer’s Disease, there is no definitive treatment and diagnosis for this disease. Certain diagnosis can only be obtained through autopsy after the person’s death. However, various tests are run to diagnose the disease based on their symptoms. These tests include a complete blood test, Magnetic Resonance Imaging of the brain (MRI), Positron Emission Tomography (PET) scans as mentioned in table 2. Other types of diagnosis include imaging, biopsy, genetic testing and Mini-mental state examination (Mendiola-Precoma et al. 2016).

Table 2: list of tests and Diagnosis for Alzheimer’s disease (Dalvi 2012)

Blood Test (Glucose, renal and liver function test, blood count, B12 levels, thyroid function test). These tests are related to the risk factors of AD and can be useful to determine the likelihood of developing Alzheimer’s disease.

MRI Volumetric MRI will show the shrinkage of the medial lobe.

PET By performing PET scans, changes in the posterior parietal lobe can be noticed. If the person suffers from hypometabolism, then they are most likely to suffer from AD.

Donepezil, Rivastigmine, Galantamine are cholinesterase inhibitors for mild and moderate Alzheimer’s. Acetylcholine in synapsis is degraded by enzyme cholinesterase, by inhibiting this enzyme the levels of acetylcholine in the synapsis are increased thereby increasing the cholinergic activity. The most common side effects of cholinesterase inhibitors are related to cholinergic stimulation of the gut. Some of the symptoms include nausea, vomiting and diarrhea, salivation. Administration of these drugs delays the cognitive deterioration in patients who have Alzheimer’s (Atri 2019; Dalvi 2012).

Memantine antagonises the action of glutamate and reduces the damage of cells in the hippocampus. It is used in the treatment of moderate and severe Alzheimer’s. Adverse effects of memantine are headache, dizziness and confusion. This drug improves the stability and cognitive decline in patients when administered for a longer duration (Atri 2019; Dalvi 2012).

Nonamyloidogenic pathway has been enhanced by metalloproteins which act as an alpha-secretase agonist (Mendiola-Precoma et al. 2016). Prohibition of beta-amyloid plaques can be initiated by upregulation of alpha-secretase activity using “A disintegrin and metalloproteinase 10” (ADAM 10). Transcriptional activity regulated by ADAM in increase alpha-secretase action also involves melatonin and serotonin which are commonly known as agonists for the nonamyloidogenic pathway, studied in AD mouse models (Mendiola-Precoma et al. 2016).

Inhibition of neurofibrillary tangles with hyperphosphorylated tau protein has been studied using immunotherapies (Mendiola-Precoma et al. 2016). For instance, irreversible beta inhibitor tideglusib has failed to show significant inhibitory results on tau proteins. There are plethora molecules like methylene blue, azure A, B that exhibits anticipated results. Leucomethylthionium and Methylthioninium which is in clinical trial phase have shown pronounced results in tau protein inhibition. Although above-mentioned drugs molecular mechanism has been less studied (Mendiola-Precoma et al. 2016).

As the disease progresses patients suffer from communicating and they tend to avoid social gathering, resulting in depression. In the final stages of Alzheimer’s, the person becomes highly dependent on others. Therefore, severe Alzheimer’s will not only impact patients, as well as family members and caregivers. As there is no definitive treatment for Alzheimer’s, several non-pharmacological therapies are being tested as well. Music therapy is one of the non-pharmacological treatments that have shown some significant effects in patients with Alzheimer’s. Music therapy is beneficial as patients do not suffer from side effects and it is not a costly pursuit. This therapy can show a significant impact on a person’s behaviour, cognitive function, and can reduce anxiety and depression. Music can be used as an active approach and passive approach. In an active approach or direct approach, patients are involved in singing or playing an instrument in a group or individually. In the passive approach, patients listen to music daily (Clements-Cortes & Bartel 2018; Gomez Gallego & Gomez Garcia 2017). Gallego (2015) states that when patients are subjected to music therapy both actively and passively, there was a reduction in their stress levels, in addition to improvements in their social skills. From other studies, it was observed that music therapy showed development in their episodic memory. Many studies have revealed the effects of music on patients with Alzheimer’s disease. However, there is a lot be uncovered to help the patient’s health and to slow down the progression of the disease.

Even though AD has been reported since 1907, there is no definitive diagnosis or treatment for this disease to this day. Although extensive research has been carried out in this area patients still suffer from episodic memory loss, cognitive decline and behavioural changes. Preventive methods have not been discovered. Therefore, by studying the mechanism of the disease, observing the various aspects of the cognitive and behavioural changes that affect the brain and looking into new non-pharmacological interventions like music can delay disease progression.

Alzheimer's Disease and it's Stages. (2019, Nov 24). Retrieved from http://studymoose.com/alzheimers-disease-and-its-stages-essay 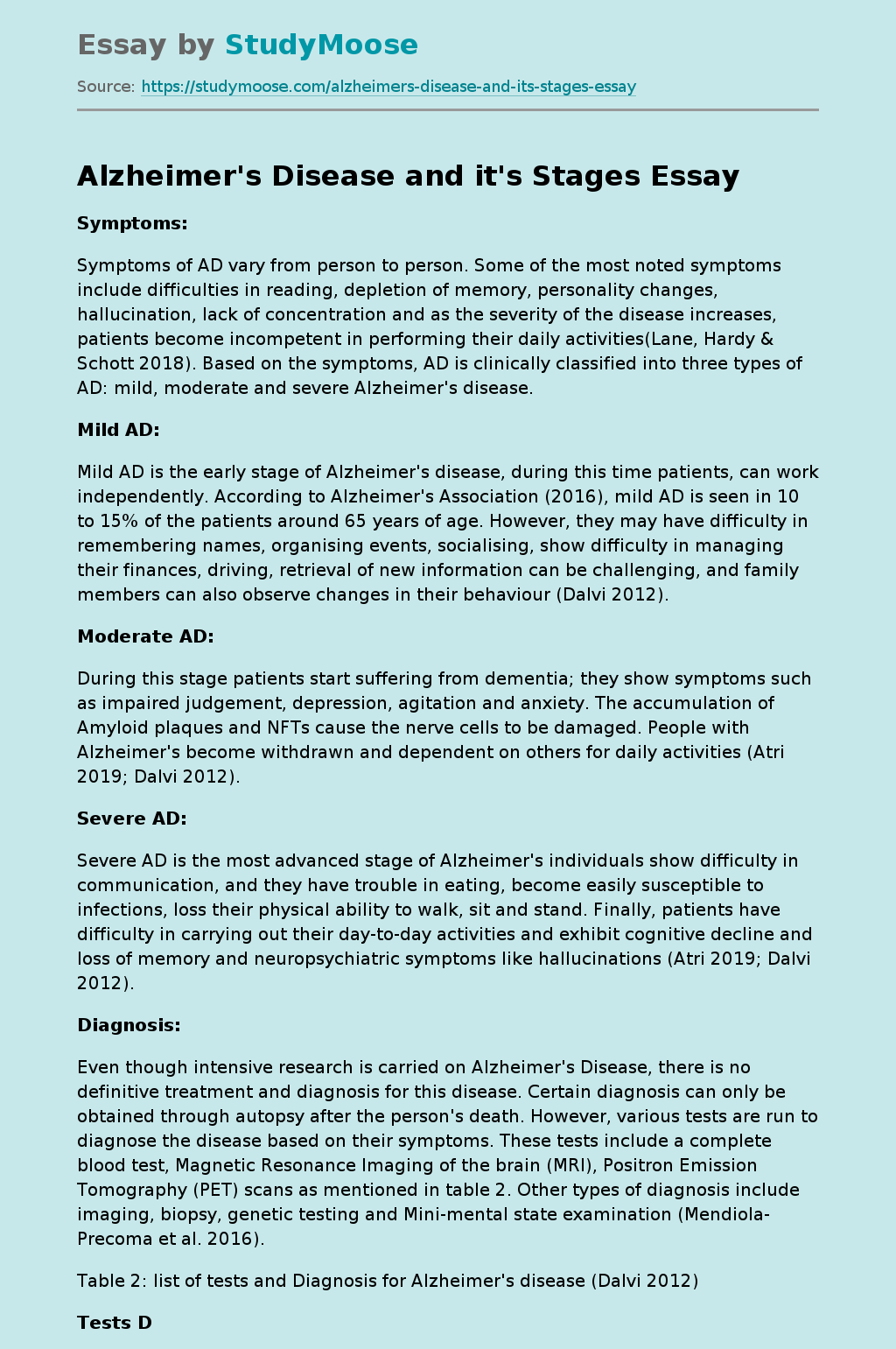