Background and Rationale: Alzheimer’s Disease (AD) is a progressive neurodegenerative disease which causes dementia and is characterized by neurofibrillary tangles and extracellular amyloid-І plaques (AІ). The progressive decline in neural function causes memory loss, more commonly known as dementia, and the loss of cognitive function. In a healthy physiological state intracellular calcium signals are coupled with effectors to maintain calcium levels, but dysregulations are found in neural cells of Alzheimer’s patients (1). The causes of AD are on the forefront of biomedical research and there is ambiguity around the level of involvement of AІ in the pathogenesis of the disease.

Don't use plagiarized sources. Get your custom essay on
“ Background and Rationale Alzheimer’s Disease AD is a progressive neurodegenerative disease which causes ”
Get custom paper
NEW! smart matching with writer

Geneticists have begun to identify genes correlating to Alzheimer’s and categorized them into two subsections: Risk Genes and Determining Genes. Each person inherits some form of the APOE gene from each of their parents; APOE-e4 is one the common forms of the gene that has been identified as an Alzheimer’s Risk Gene and the presence of extra copies correlates to the likelihood of developing the disease.

Known mutations on these and other genes are associated with AD but the epigenetics of them remain unclear. Recent evidence suggests that DNA methylation, an epigenetic modification, plays a role in the development of AD beyond the scope of gene mutations. Consistent with this, monozygotic twins reveal a non-Mendelian mode of inheritance of AD pointing towards a mode of inheritance beyond simple DNA sequences (2). Other projects support this epigenetic mechanism through the tracking of maternally inherited genomic regions mediated by DNA methylation (3).

Studies have also been completed in both human and mice that convey a change DNA methylation levels when compared to control group counterparts. Differential DNA Methylation levels appear in the anterior temporal neocortex, which is a highly effected region in AD patients (4). All of this is consistent and supports the notion of DNA methylation correlating to AD symptoms; the expression levels of genes that have been associated with AD are known to be regulated based on the DNA methylation of their promoters and respective regions (5).Specific Aim The specific aim of this research is to investigate the levels of DNA methylation on differentiated human neural cells with and without AІ to establish a relationship between methylation of genomic sequences and the development of AD. Hypothesis DNA methylation levels of individual genomic regions play a role in the genomic variation of neuronal cells and in the causes of AD. Epigenetic variation due to increased or decreased levels of methylation correlate to the development of AD. Experimental Design In this study, human IMR-32 cells will be differentiated into mature neuronal cells and treated with AІ. The cells will then be analyzed through various promoter arrays to determine individual genomic methylation patterns as the neuronal cells develop into AD-like states. The determination of methylation can be done using Bisulfite sequencing, methylated DNA immunoprecipitation (MeDIP), methylation-sensitive restriction enzymes (MSRE), or HpaII tiny fragment Enrichment by Ligation-mediated PCR (HELP assay). Due to short-comings and functional details, the HELP assay will be used in this investigation. HpaII and MspI are both MSRE’s; MSRE’s cut sequences 4 base pairs long in the 5′-3’direction and use the endonuclease specificity to determine the methylation levels of the region. Using these specific endonucleases, HpaII and MspI and the HELP assay, expression levels can be determined without additional PCR controls (6). These endonucleases are both isoschizomers that both recognize 5′- CCGG-3′ sequences; MspI is insensitive to the methylation status of the region whereas HpaII digestion is restricted when sequences are methylated. By cohybridizing these sequences in genomic microarrays, intergenic and intragenic comparisons can be made to determine methylation levels (7). The HELP method with HpaII and MspI will be used because this will detect both methylated and unmethylated regions. The neuronal cells will be place in proliferation media for 48 hours and transferred to differential media for 7 days. After differentiation the cells will be harvested via scraping and centrifuged into pellets; each pelleted region will then be treated with cold PBS (phosphate-buffered saline) and stored at -80°C. The cells will be treated with a lysis buffer, protease K, RNase, and phenol-chloroform-isoamyl alcohol (PCIAA). Precipitation and purification will take place via ethanol; UV spectroscopy will be used to quantify each region. Regions will be digested with HpaII and MspI in separate reactions. Immediately after digestion ligation will occur to prevent reannealing of overhang regions via NHpaII12 (5′-CGGCTTCCCTCG-3′), NHpaII24 (5′-GCAACTGTGCTATCCGAGGGAAGC-3′), JHpaII12 (5′-CGGCTGTTCATG3′), JHpaII24 (5′-CGACGTCGACTATCCATGAACAGC-3′). This process will take place on undifferentiated cells, differentiated cells and cells treated with AІ. Treatment with enzyme specific buffers, linkers and primers will take place before PCR. The Ligation-Mediated Polymerase Chain Reaction (LM-PCR) scheme begins with an initial extension step at 72°C for 10 minutes, 15-20 cycles of 95°C for 30 seconds and 72°C for 3 minutes, and a final extension step at 72°C for 10 minutes. To analyze the data, five 385K DNA Methylation microarrays from Roche NimbleGen will be used to hybridize 2 undifferentiated DNA samples, 2 differentiated DNA samples, and 1 DNA sample from differentiated cells treated with AІ; an uncut control was included to serve as a positive control for maximum amplification possible (8). Raw data will be entered in Matlab 2011 to make graphical conclusions of each condition for increased and decreased methylation levels. This investigation is looking for hypermethylation and hypomethylation in these specific regions to correlate with the presence of AІ to indicate a correlation between these levels on neuronal cells and the stage development of AD. This would represent a global similarity and indicate that DNA methylation plays a role in the development. Conclusion The analysis of DNA methylation levels can indicate the epigenetic changes in neuronal cells presenting with AD. Variations in the specific loci will lead to future studies utilizing in vivo models coupled with expression data will further clarify the effects of AІ on neurons by monitoring the outcomes of differentially methylated genes. 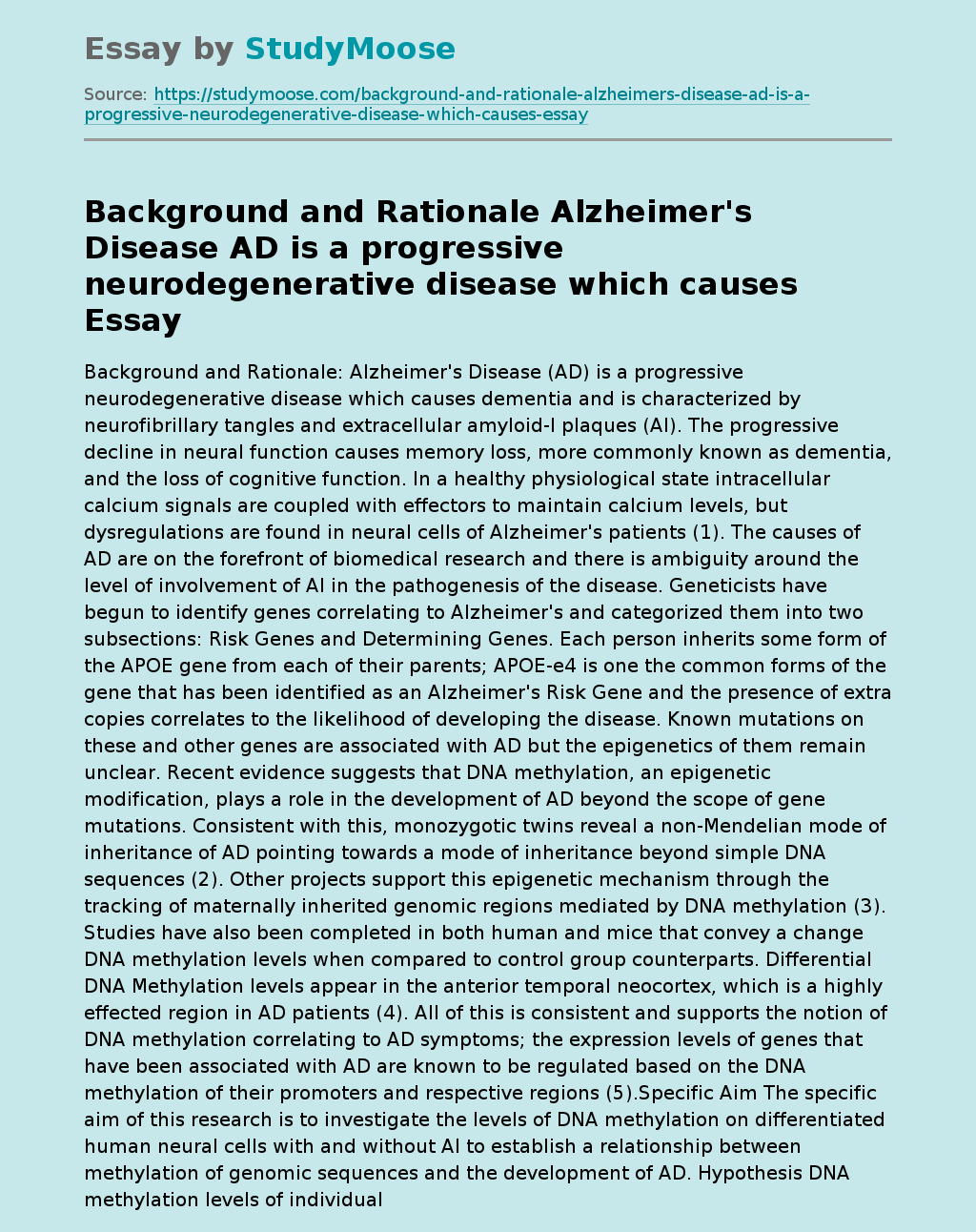