In 1906 a German neurologist Alois Alzheimer performed a neurological autopsy on a 56-year-old woman who had suffered deteriorating mental health for many years before her death. Alzheimer noticed a disorganization of nerve cells in her cerebral cortex, the area of the brain responsible for controlling memory and reasoning.

Don't use plagiarized sources. Get your custom essay on
“ Alzheimer’s Disease ”
Get custom paper
NEW! smart matching with writer

There were two oddities he found. The first was an accumulation of cellular debris surrounding the nerves he called this senile plaque. The second oddity were groups of nerves that were bunched and twisted he called this neurofibrillary tangles. In the following years as more autopsies were conducted the same oddities that were found in 1906 were found in patients displaying the same symptoms.

At that time a prestigious German psychiatrist, Emil Kraepelin, proposed naming the disease in honor of its discoverer Alois Alzheimer. (http://www.Alzheimers.com)

Alzheimer’s Disease is a chronic brain disorder that destroys one’s ability to reason, remember, imagine and learn. The disease is also known as “senile dementia” or “pre-senile dementia”. Dementia refers to the lost of mental health. The term “senile” means old. “Pre-Senile” refers to those patients less than 65 years of age. (http://www.alzheimers.com)

Lesions on brain cells that take the form of senile plaques and neurofibrillary tangles cause Alzheimer’s Disease.

Healthy brain tissue is normally arranged in an organized pattern. These knots and tangles throw the brain into mass confusion taking over and destroying healthy brain tissue. This causes the brain cells to stop functioning. Recently a protein Tau has been discovered in these tangles and knots. This protein is found in healthy brain cells, but is found in much larger quantities surrounding areas affected by this disease. Other ailments have been linked to the onset of the disease. These include head trauma, problems with the immune system, blood cancer, thyroid problems and Down’s Syndrome. (Frank, 1985)

There are four distinct stages of progression. The progression of Alzheimer’s can take from three to fourteen years. This time span is based on the time from diagnosis to death. All patients go through these stages just at different rates.

The first stage of Alzheimer’s the patient experiences a slowing down of many factors of behavior. They have less energy, slow to learn new things, and their reaction time decreases. Patients experience only mild forgetfulness of recent events, familiar people and places. They have a decrease in judgment, and trust. Also, they become increasingly stubborn and restless. Many people are unaware of the presence of a disease because frequently memory loss is common in the elderly due to fatigue or a period of sickness. (http://www.ahaf.org/alzdis/about/adsymp_body.html); (http://www.alzheimers.com)

In the second stage the patient becomes increasingly forgetful and has more trouble recalling recent occurrences. They have difficulty in skills such as decision making, planning and judgment. The patient’s speech and comprehension become much slower and often loose their train of thought often. They are usually able to complete common tasks but need assistance with more complicated ones. They must be given clear and repeated instructions by caregivers. Victims start to become aware of illness and become depressed, irritable, restless, and socially withdrawn. (http://www.ahaf.org/alzdis/about/adsymp_body.html); (http://www.alzheimers.com)

In the third stage Alzheimer patients loose all ability to recognize familiar people and places. They have trouble completing simple everyday tasks like eating, bathing, getting dressed and using the toilet. They lack interest in personal hygiene and loose all sexual instincts. They have difficulty communicating verbally. Patients are easily agitated and deny they are ill. (http://www.ahaf.org) (http://www.alzheimers.com)

The fourth stage of Alzheimer’s Disease is the stage that ultimately leads to death. Patients are unable to recognize themselves and close family members. They become bedridden; and only slight useless movements are made. The only way of communication they use is screaming out. (http://www.ahaf.org) (http://www.alzheimers.com)

Diagnosis of this disease is very difficult. Doctors are only 100% certain of the presence of the disease from autopsies after death. Diagnosis is based on the judgment of physicians and their experience with Alzheimer’s Disease. Current accuracy of correct diagnosis is 90%. Recently they have discovered a way to test the level of Tau protein; this has helped with correct diagnosis. Sometimes mental tests are run to test the memory, learning skills, language skills, and the ability to follow instructions.

Many people also question the heredity of the disease. It has been found that some forms of the disease are hereditary. The “Pre-Senile” Alzheimer’s which usually sets on in a person around 40, 50 years of age is found to be hereditary. There are three types of genetic proteins that have been linked to Alzheimer patient’s apoliprotein E2, E3, and E4. Those who inherit E4 have a higher chance of developing the disease. (http://www.ahaf.org)

Currently treatment is focusing on slowing progressions and coping with symptoms. One drug, THA, is a drug that helps to boost levels of acetylcholine, a chemical that is involved in memory. Two FDA approved drugs being tested are Tacrine and Donepezil these drugs are also to help memory. Although, these drugs cause side affects, Donepezil is found to cause nausea, cramps and lose of appetite. Estrogen for women has been found to have a positive affect on Alzheimer patients mental decline. It helps memory, language skills, and the ability to concentrate. Nicotine has also been found to slow the formation of senile plaque, improve memory, learning and concentration. Doctors do not suggest this use of treatment at all; nicotine causes lung cancer, emphysema, high blood pressure, heart attacks and strokes. (Harmon, 1999)

This disease affects 10% of those over 65 years old and 50% of those over the age of 85. One-Half of those living in nursing homes are living with Alzheimer’s. Seven out of 10 patients live at home; family members care for 75% of them; the other 25% of them are cared for by hired caregivers. It has also been found that 55% of caregivers show some signs of depression.

Alzheimer’s Disease is a very costly disease; it is the third most costly disease after heart conditions and cancer. In 1998 the U.S. Government spent approximately $90 billion on medical care and $400 billion to research. This disease costs a family $174,000 a year on care giving and another $42,000 a year on nursing homes. Medicare is a retirement benefit to those over 65 years old. Medicare does cover some the costs to provide help to the patient such as nursing homes. The extent of help varies by state.

When seeking help people find themselves asking, “Where should I go?” “When should I go?” When you feel that a family member may have the disease or in need of mental attention you should first see you family physician. The physician will determine if they believe the problem to be Alzheimer’s. You should also bring medical records and a list of all medication the patient is on because certain medications or the combinations of medications may resemble Alzheimer’s.

In every community there are services offered to assist those people affected by Alzheimer’s, for patients, family and caregivers. Http://www.webcom.com/susan/gstbk.html is a web site known as the “Anger Wall”. It is a message board that invites all people affected by the disease to express and vent their feelings. (Harmon, 1999).

There are also foundations that you can donate money to Alzheimer research. The Alzheimer’s Association is the largest. Former President, and Alzheimer patient Ronald Reagan and his wife Nancy have also set up a foundation. In 1994, one year after telling the American people he was a victim, he and Nancy set up the Ronald and Nancy Reagan Research Institute. Another family member of an affected celebrity that set up a fundraiser is Princess Yasmin Khan, daughter of actress Rita Hayworth. The Rita Hayworth Gala, an annual celebrity event has been the most successful Alzheimer’s fundraiser. (Harmon, 1999). 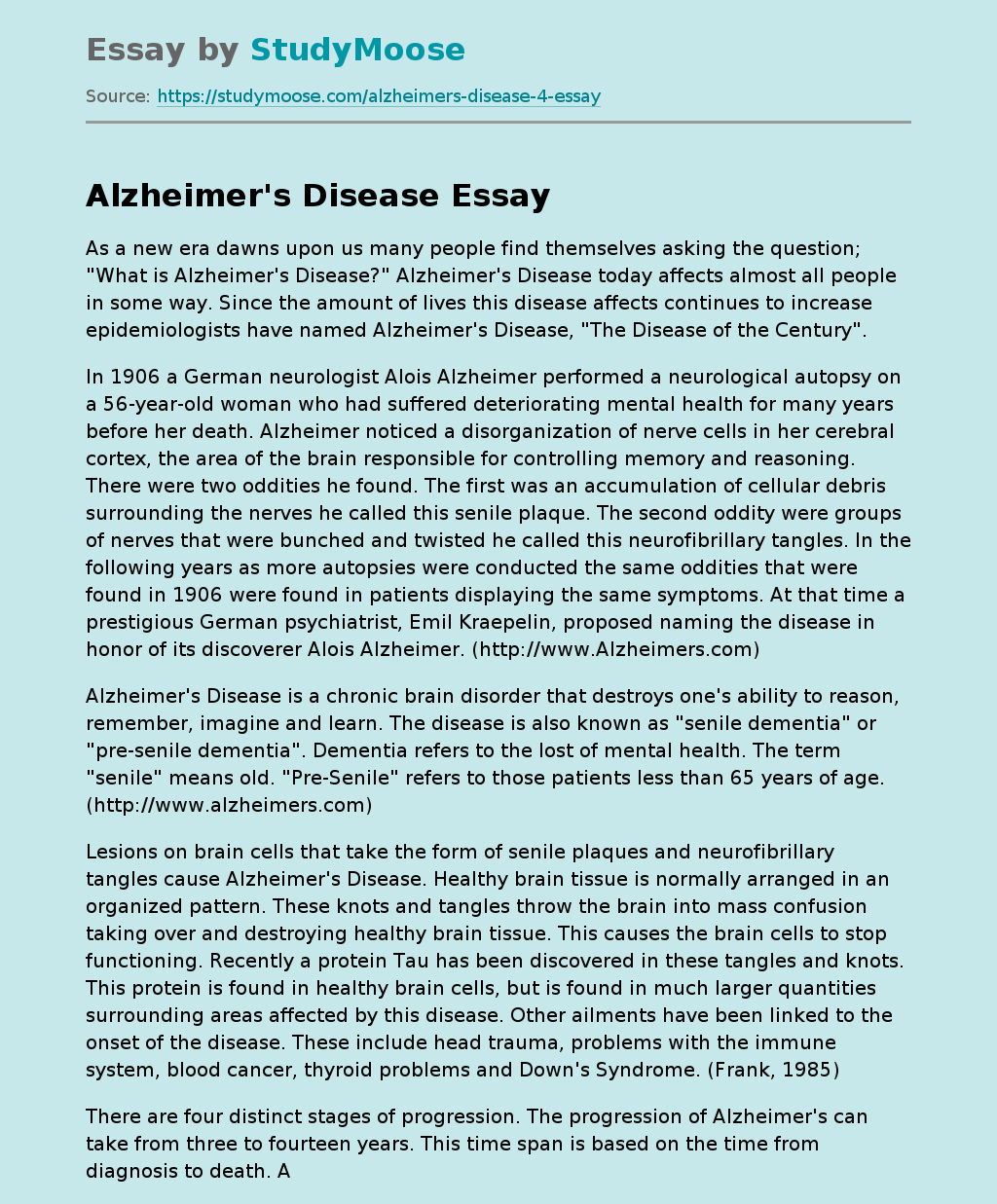