Is drug addiction a disease or a choice

Is drug addiction a disease or a choice?

Have you in any way contemplated whether drug addiction is a disease or a choice? This topic has been very controversial and has brought about many debates to ascertain the whole thing. Many researchers have taken a stand that being a drug addict is completely a disease that only can be cured by taking drugs. On other side, there are other researchers who are for it not being a disease but just a matter of choice.

Don't use plagiarized sources. Get your custom essay on
“ Is drug addiction a disease or a choice ”
Get custom paper
NEW! smart matching with writer

Having considered and carried a lot of research on this controversial issue, my stand remains that drug abuse or drug addict is wholly a matter of choice and not a disease.

The time one is born, he/she does not know anything. You are introduced into the new world with your own will. The things that one chooses to do at any age are solely his or her own choice. There are many things that happen in this world that may directly or indirectly involve oneself.

Everybody has the will to make his or her own decision, to say yes or no to indulgent into some activities. In whatever case, any time that these boundaries are crossed, it becomes a choice that has been made.

In the world of today, it is very impossible for someone to say that they have never come across or know anybody who is in one way or the other involved in drug abuse or addiction. One could know a person who is a drug abuser, addict or is even contemplating usage of drugs.

Though, nobody at any point gets involved with drugs when he/she has not chosen to do so at the startup. When the first decision to either test or use drugs, the decision leads to severe drug addiction or abuse. There are many people who do not know that there is a difference between being a drug addict and a drug abuser. The only fact is that neither of the two is better than the other. Drug addiction is when somebody uses any kind of a substance that is deemed to be dangerous or comes with many dangerous and negative effects. Carl L. et al. on the other hand, Drug abuse is when someone uses a substance or a drug excessively or when they apply it into the purposes that it was not medically intended to. (Hart, Ksir, Ray). According to the researches that have been carried, it is true that one can abuse drugs and he/she has not been addicted to the same but one cannot be addicted to drugs without being an abuser of the same. When a person makes a decision to first use a drug substance, the spiral downward trend begins to take effect on one’s life unless the involved person makes a decision to stop being an addict because also quitting drug usage is also another choice.

Like all the other choices, drug addiction or abuse is influenced by goals and preference. Drug addiction is not gender based and can affect anybody regardless of his/her economic status. The first decision that is made to first start abusing drugs leads to a direction of making decisions that are not right according to other people who are not drug addicts. These decision could involve making a decision to drive a car sometimes even in uncontrollable speed, indulging into unprotected sex, or even take part in some activities that one would not have done normally if they were not under the influence of drugs. The ones who are completely addicted fail to fulfill their obligations at work, home, at school and even to his/her friends. To cite an example of this I shall use a woman who indulged into drug addict only because she had a small fight with her husband. The woman has been a drug addict but now she has fully quitted to be one for more than twenty five years. In an interview, she recalls the time that she firstly made a decision to try cocaine. She states that because of the feeling that resulted from her and her husband she easily made a decision to let someone convince her to take cocaine. From that time, she wanted to try the drug again and again so that she could feel the highness that she had felt the first time she took the drug. For five years, she constantly chased the high feeling. For another one year, she was struggling with the idea of wanting to quit drug but still the high feeling drove her back into the trap. The woman remembers getting some money from her family member and blowing more than two thousand dollars on one day. She became very neglectful towards her kids and also the other family members. Due the circumstances she passed through, ranging from being involved in a drug raid many times, the fear that her kids were going through hard times, she decided to go for a rehab. This is a decision that she also made to herself without being forced by anyone to do so. In the interview with the woman, she was asked whether she believed that drug addiction was a matter of choice or a disease. She responded by saying that it was solely a matter of choice because on her case nobody had forced her to became an addict each time that she used the drug she knew of the adverse effect that comes with the same and also she realized how her family were being affected yet continued taking cocaine. When she was asked if she accepted the full responsibility for all her actions, she responded “yes”. She said that it could be wrong to blame other for her own choices and she put it clear that it was her choice to start using the drugs as it was in quitting.

The drug addiction support group suggests that no matter the drug of choice, counseling, treatments and other kind of intervention are necessary for any addict to return to their normal and healthy lifestyles. It is clear that there are some other factors that need to be considered by the drug addicts so that they can not only remain clean but also drug free. One should make it clear to choose on the friends that he/she hanged up with, the places that one spends his/her leisure time, and the things that one does that could lead them to become drug users or rather abusers and addicts.

In conclusion, drug use is a willful commitment or a choice just like choosing or dedicating oneself to complete a college education or choosing to join a certain club. Even though heavy consumption of drug is self destructive and foolish, it is a matter of choice. The addiction has no specific people who are affected, no matter whether a person is nice, weak, educated, rich or poor they can all be tempted to make the choice of becoming drug addicts by merely being convinced by what they may think is a high and good feeling but undermining the fact that they are destructing their bodies. When some individuals try to label the drug addict as the ones who have some kind of a brain disease, it is a big insult to the ones who truly have the disease but have not chosen to indulge in drug abusing activities. All the people that are drug abusers should accept the responsibility for their own choices. Every time that a person decides whether to acquire the drugs for money or by use of other means, they have not been forced by anybody, it is xjust their own choice and no one else should be blamed for this. The ones that have decided to stop drug addiction; they have done so because they chose to do so. Owing to all these arguments, my stand remains that drug addiction is a matter of choice and not a disease.

Is drug addiction a disease or a choice. (2015, Oct 16). Retrieved from https://studymoose.com/is-drug-addiction-a-disease-or-a-choice-essay 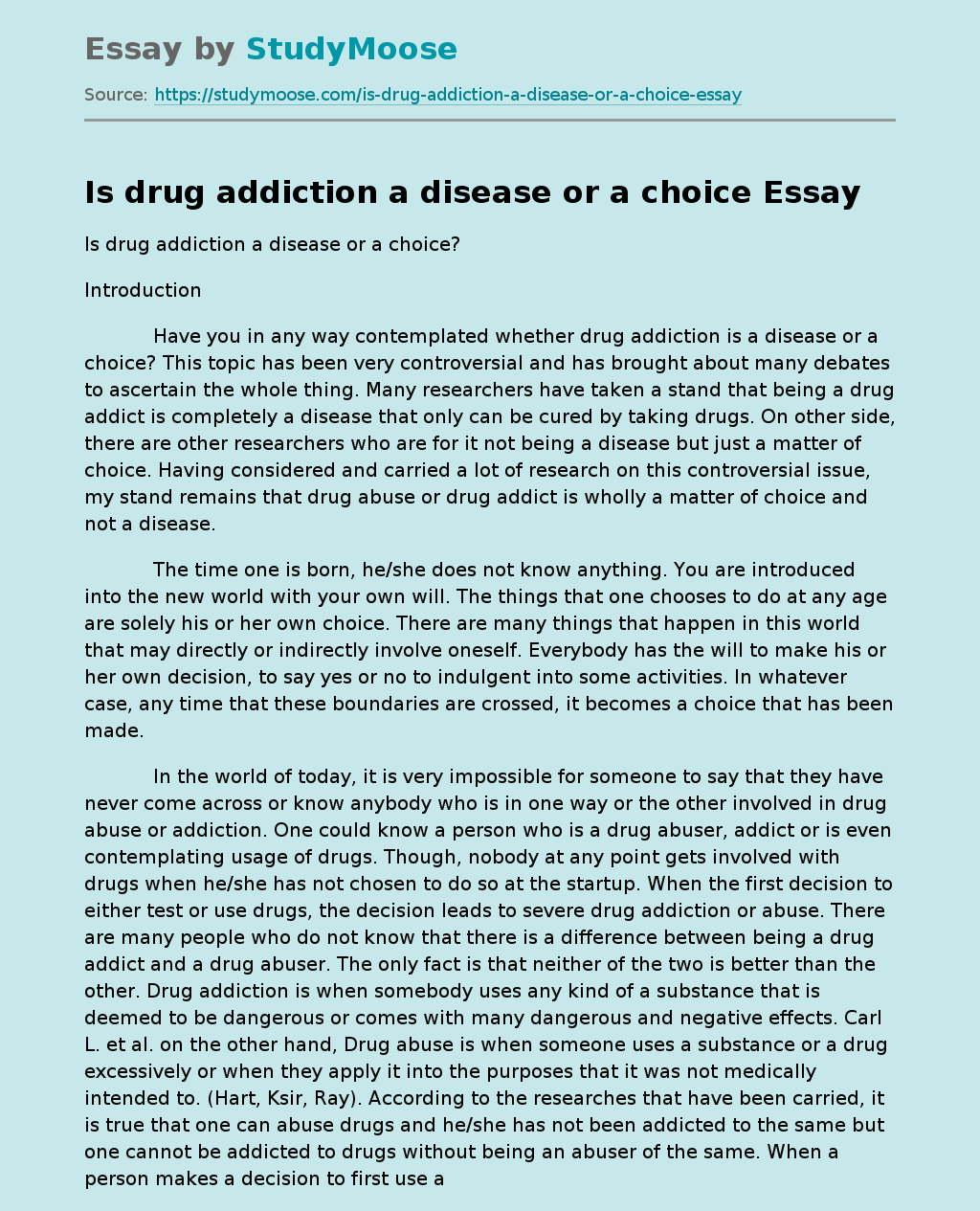