The Evil of Drug Addiction

Our ancestors have spoken of five cardinal sins which must be avoided by all means though they may appear to bring profit or pleasure for the time being. The five cardinal sins are gambling, stealing, murder, unchastity, and drugs. The history of humanity is replete with examples where people have been ruined by following the path of one or another of them. Whole nations were brought to disgrace because of opium.

Why then does a man take to drugs? Some think it adds to pleasure; some other think that it takes away physical weariness.

Don't use plagiarized sources. Get your custom essay on
“ The Evil of Drug Addiction ”
Get custom paper
NEW! smart matching with writer

Also they have a doping effect such that at the spur of the moment, the person may act more vigorously but only to find himself weaker later. Still others take it in order to join their peers. In cold countries, they take it to keep themselves warm.

While in very small doses, drugs act as medicines, but in large doses, they can only bring harm. Sustained consumption of them in large quantities will lead to dependency and addiction.

Continued addiction upsets the digestive system, especially the liver, leading eventually to death. Drugs also affect the nervous system, especially the brain which controls the voluntary action. So a man under the influence of a drug in unable to walk properly, and he staggers. Id deadens the senses, so he does not know what he does or speaks. Very often, under the influence of a drug, he can do shameful acts.

The mental faculties will be numbed. To forget their worries, people take drugs, but that is not the answer to their worries.

The addiction can only bring moral degradation. The addict himself knows it, and so he consumes them only in secret, and no addict openly will come forward to say he is an addict. It would be disapproved by society. Socially, and addict is looked down upon, and people would try to avoid him. He would be a nuisance wherever he is at home or t work. He would bring untold misery to his friends and family, and those around him. Except in the company of a leper. His family also will share the ignominy because people will point the accusing finger at such a family.

Financially, it ruins the addict. The money would go down the drain when it could have been used for the betterment of the self or for the benefit of the family. Drug addiction is also against all religious sanctions which consider drug use to be an immoral and evil activity.

Certainly, the drugs will not and cannot bring real pleasure or add to the quality of life. If one thinks in that way, it is only an illusion. Nowadays, drugs like marijuana, opium and others are being taken by youngsters under false pretenses. It is really unfortunate if they do not realize the harmful effect. So it is best to avoid the company of those who have recourse to drugs or peddle them. Remember the physical ruin, mental upset, moral degradation, social and financial breakdown. So, for God’s sake, one should never be tempted by them.

The Evil of Drug Addiction. (2016, Jul 30). Retrieved from https://studymoose.com/the-evil-of-drug-addiction-essay 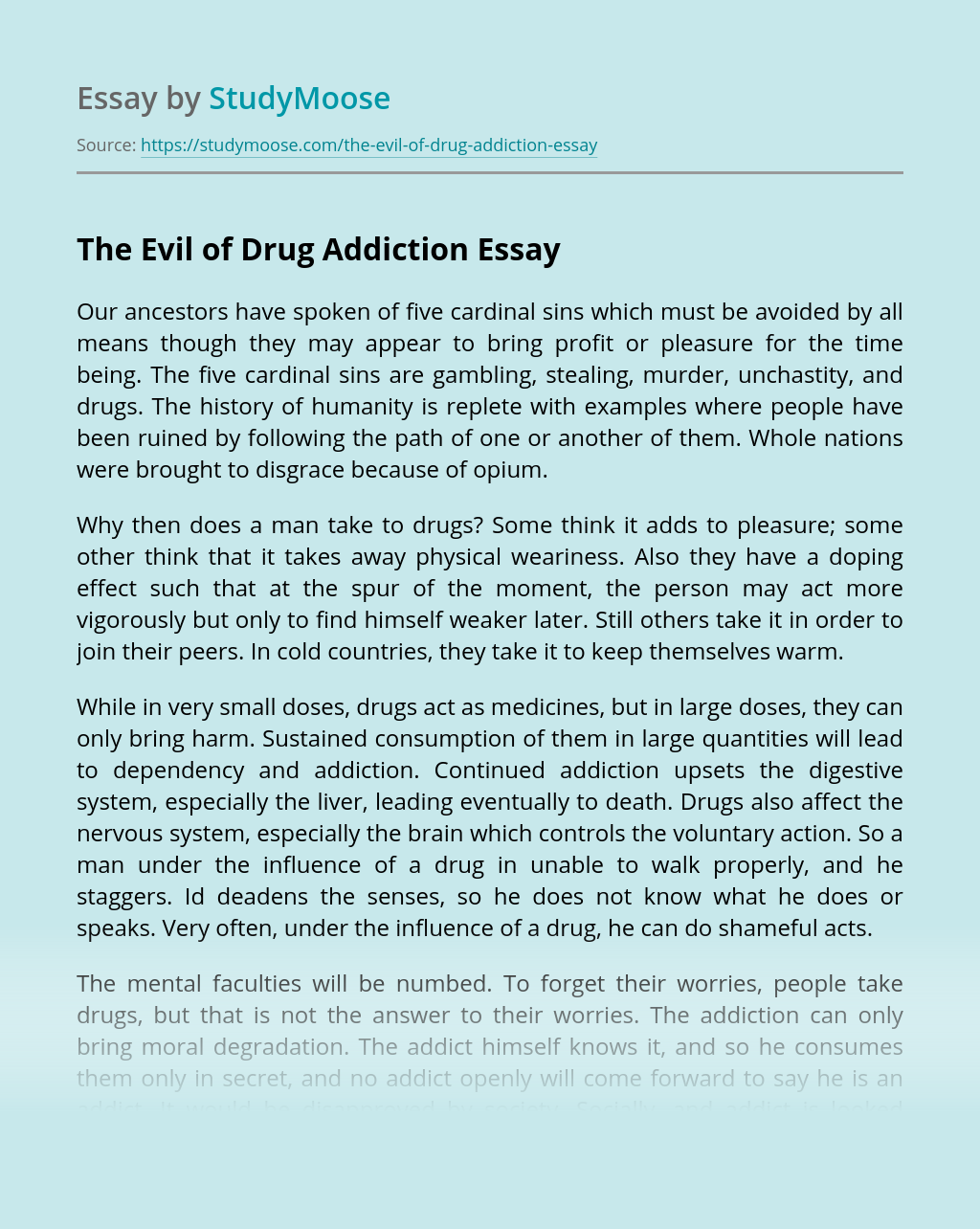