Prescription drug abuse has had a strong hold on American society for decades and it does not appear to be diminishing. While some drugs have decreased in popularity over the years others have increased. For instance, there has been a surge in the popularity of Ecstasy and other “Club” drugs and an increase in marijuana use over the past few years. While society has taken steps in the right direction by supporting treatment programs for addicts and drug abuse prevention programs much more must be done to lower the current trend of substance abuse in our culture.

Don't use plagiarized sources. Get your custom essay on
“ Prescription Drug Abuse ”
Get custom paper
NEW! smart matching with writer

For now, we will be arguing upon the abuse of prescription drugs.

What Are Prescription Drugs?

Prescription drugs are medications regulated by the U.S. government. These medications are helpful in treating a variety of health conditions and are only available when prescribed by a doctor or other healthcare professional. The government restricts these medications because they may be harmful if they are not taken properly or if they are combined with other medications (Firshein, 2005).

Doctors and other healthcare professionals are highly trained and experienced at selecting the best medication to use for a certain condition. The type of medication and the dosage prescribed is carefully determined. It’s very important that the doctor’s directions are followed exactly to help treat the condition for which it was prescribed and to make sure the medication doesn’t cause unwanted effects (Kalb, 2001).

Taking prescription drugs in a way that hasn’t been recommended by a doctor can be more dangerous than people think. In fact, it’s drug abuse. Moreover, it’s just as illegal as taking street drugs. But some people experiment with prescription drugs because they think they will help them have more fun, lose weight, fit in, and even study more effectively.

Experts stress that prescription drug abuse isn’t about bad drugs or even bad people. It involves a complex web of factors, including the power of addiction, misperceptions about drug abuse, and the difficulty both patients and doctors have discussing the topic.

Why? Some people think that prescription drugs are safer and less addictive than street drugs. After all, these are drugs that moms, dads, and even kid brothers and sisters use. But prescription drugs are only safe for the individuals who actually have prescriptions for them. That’s because a doctor has examined these people and prescribed the right dose of medication for a specific medical condition. The doctor has also told them exactly how they should take the medicine, including things to avoid while taking the drug — such as drinking alcohol, smoking, or taking other medications. They also are aware of potentially dangerous side effects and can monitor patients closely for these.

Other people try prescription drugs because they think they’re not doing anything illegal because these drugs are prescribed by doctors. But taking drugs without a prescription — or sharing a prescription drug with friends — is actually breaking the law. Some people mistakenly think that prescription drugs are more powerful because you need a prescription for them. But it’s possible to abuse or become addicted to over-the-counter (OTC) medications, too. For example, dextromethorphan (DXM) is found in some OTC cough medicines. When someone takes the number of teaspoons or tablets that are recommended, everything is fine. But high doses can cause problems with the senses (especially vision and hearing) and can lead to confusion, stomach pain, numbness, and even hallucinations.

A Look In The Past

According to the 1999 National Household Survey on Drug Abuse, in 1998, an estimated 1.6 million Americans used prescription pain relievers non-medically for the first time. This represents a significant increase since the 1980s, when there were generally fewer than 500,000 first-time users per year.

Data from the 2003 National Survey on Drug Use and Health (NSDUH) indicate that 4.0 percent of youth ages 12 to 17 reported non-medical use of prescription medications in the past month. Rates of abuse were highest among the 18-25 age group (6.0 percent). Among the youngest group surveyed, ages 12-13, a higher percentage reported using psychotherapeutics (1.8 percent) than marijuana (1.0 percent)

The National Institute on Drug Abuse Monitoring the Future survey of 8th, 10th, and 12th graders found that the non-medical use of opioids, tranquilizers, sedatives/barbiturates, and amphetamines was unchanged between 2003 and 2004. Specifically, the survey found that 5.0 percent of 12th graders reported using OxyContin without a prescription in the past year, and 9.3 percent reported using Vicodin, making Vicodin one of the most commonly abused licit drugs in this population.

Which Drugs Are Abused?

The most commonly used prescription drugs fall into three classes:

Medical uses: Opioids are used to treat pain or relieve coughs or diarrhea.

How they work: Opioids attach to opioid receptors in the central nervous system (the brain and the spinal cord), preventing the brain from receiving pain messages.

How they work: CNS depressants slow down brain activity by increasing the activity of a neurotransmitter called GABA. The result is a drowsy or calming effect.

Medical uses: Stimulants can be used to treat narcolepsy and ADHD.

What Are the Dangers of Abusing Medications?

Whether they’re using street drugs or medications, drug abusers often have trouble at school, at home, with friends, or with the law. The likelihood that someone will commit a crime, be a victim of a crime, or have an accident is higher when that person is abusing drugs — no matter whether those drugs are medications or street drugs.

Like all drug abuse, using prescription drugs for the wrong reasons has serious risks for a person’s health. This risk is higher when prescription drugs like opioids are taken with other substances like alcohol, antihistamines, and CNS depressants.

CNS depressants have risks, too. Abruptly stopping or reducing them too quickly can lead to seizures. Taking CNS depressants with other medications, such as prescription painkillers, some over-the-counter cold and allergy medications, or alcohol can slow a person’s heartbeat and breathing — and even kill.

Abusing stimulants (like some ADHD drugs) may cause heart failure or seizures. These risks are increased when stimulants are mixed with other medicines — even OTC ones like certain cold medicines. Taking too much of a stimulant can lead a person to develop a dangerously high body temperature or an irregular heartbeat.

Taking several high doses over a short period of time may make a drug abuser aggressive or paranoid. Although stimulant abuse might not lead to physical dependence and withdrawal, the feelings these drugs give people can cause them to use the drugs more and more often so they become a habit that’s hard to break.

The dangers of prescription drug abuse can be made even worse if people take drugs in a way they aren’t supposed to. Ritalin may seem harmless because it’s prescribed even for little kids with ADHD. But when a person snorts or injects Ritalin, it can be serious. And because there can be many variations of the same medication, the dose of medication and how long it stays in the body can vary. The person who doesn’t have a prescription might not really know which one he or she has.

Probably the most common result of prescription drug abuse is addiction. People who abuse medications can become addicted just as easily as if they were taking street drugs. The reason many drugs have to be prescribed by a doctor is because some of them are quite addictive. That’s one of the reasons most doctors won’t usually renew a prescription unless they see the patient — they want to examine the patient to make sure he or she isn’t getting addicted. (Vranken, 2007)

According to the 2006 National Survey on Drug Use and Health (NSDUH), approximately 49.8 million Americans aged 12 or older reported non-medical use of any psychotherapeutic at some point in their lifetimes, representing 20.3% of the population aged 12 or older.

Nearly 7 million Americans aged 12 or older reported current (past month) use of psychotherapeutic drugs for non-medical purposes, representing 2.8% of the population. In this report, psychotherapeutics include any prescription-type pain reliever, tranquilizer, stimulant, or sedative but do not include over-the-counter drugs (Substance Abuse and Mental Health Services Administration, 2007)

Percent of U.S. Household Population 12 and Older Reporting Past Month Non-Medical Use of Psychotherapeutics, 2006, by Age

Additional data from the 2006 NSDUH show that 2.2 million people, aged 12 or older, initiated nonmedical use of prescription pain relievers within the past year.

Each year, the Monitoring the Future (MTF) study asks drug use and related questions of 8th, 10th, and 12th graders nationwide. MTF provides usage estimates for alcohol, tobacco, illegal drugs, and substances that are only legally available by prescription. The study includes data for the non-medical use of amphetamines, stimulants including Ritalin, and sedatives (barbiturates) including: methaqualone, tranquilizers, the narcotic pain relievers Vicodin and OxyContin, as well as GHB, Ketamine, and Rohypnol, which is not legal for prescription in the United States. Survey respondents were asked to exclude from their responses any use of prescription drugs that occurred under medical supervision (National Institute on Drug Abuse and University of Michigan, 2007).
MTF data for 2007 show that lifetime prevalence rates for amphetamine use without a doctor’s orders were 6.5% for 8th graders, 11.1% for 10th graders, and 11.4% for 12th graders.

Percent of Students Reporting Lifetime Non-Medical Use of Psychotherapeutics, 2007, by Grade

Approximately 9.6% of 12th graders surveyed in 2007 reported annual (past year) use of Vicodin without a doctor’s orders.

Percent of Students Reporting Annual Non-Medical Use of Prescriptions, 2007, by Grade

What if a doctor prescribed a medication for you and you’re worried about becoming addicted? If you’re taking the medicine the way your doctor told you to, you can relax: Doctors know how much medication to prescribe so that it’s just enough for you. In the correct amount, the drug will relieve your symptoms without making you addicted.

If a doctor prescribes a pain medication, stimulant, or CNS depressant, follow the directions exactly. Here are some other ways to protect yourself

Finally, never use someone else’s prescription, and don’t allow a friend to use yours. Not only are you putting your friend at risk, but you could suffer, too: Pharmacists won’t refill a prescription if a medication has been used up before it should be. And if you’re found giving medication to someone else, it’s considered a crime and you could find yourself in court (Vranken, 2007).

In conclusion, abusing prescription drugs can affect your relationship with your family. It can create problems at school and with your future education. You may end up losing some longtime friendships or be forced to give up some of your favorite activities. Moreover, you could get into some serious problems with the law. Listed above are so many reasons not to abuse what can be of good use. As Albus Dumbledore said in book one of Harry Potter, “use it well”.

“Prescription Drug Use and Abuse” by Michelle Meadows. Retrieved on May 2, 2008 from http://www.fda.gov/fdac/features/2001/501_drug.html. U.S. Food and Drug Administration

Survey on Drug Use and Health: National Findings, 2007

Bureau of Justice Statistics, Drug Use and Dependence, State and Federal Prisoners, 2004, 2004, October 2006 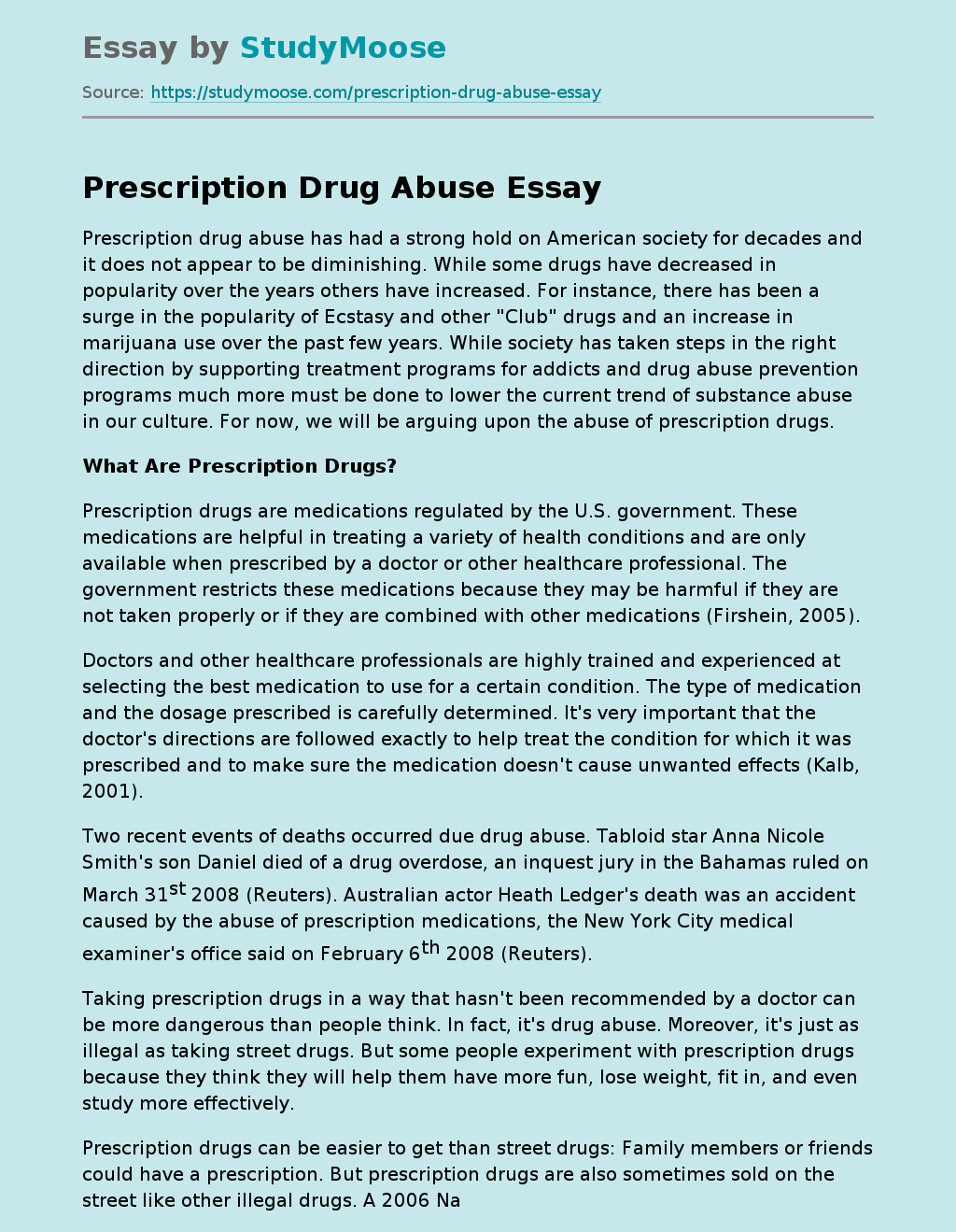