Don't use plagiarized sources. Get your custom essay on
“ A Prescription Drug Monitoring Program ”
Get custom paper
NEW! smart matching with writer

, 2018). Information provided by the PDMP on the potential misuse or abuse of prescription opioids may allow providers to ensure safe prescribing practices while alleviating their patient’s pain (Bao et al., 2016). In essence, the PDMP can be seen as an informatics tool that has the capacity to provide point-of-prescribing information to allow prescribers and pharmacist to make the most appropriate opioid prescribing and dispensing decision (Delcher et al., 2017).

Commonly noted barriers to use by health care professionals include a complicated log-in process, the amount of time required to utilize the program for searching and navigating purposes, frequent requirements for password updates, and overall increase in workload in the use of the PDMP due to required documentation mandated by each state (Poon et al.

, 2016; Radomski et al., 2017; Sun et al., 2018). Providers with valid clinical reasons to prescribe opioids for their patients may have concerns that they would be identified through the PDMP as high prescribers, which may be interpreted as inappropriately prescribing of opioids that may lead to possible criminal prosecution (Islam & McRae, 2014).

Although all states have an active PDMP, each state’s program varies and operates differently, such as the reporting time for filled prescriptions, interstate data sharing, how prescribers are identified in the PDMP database, and whether prescribers are mandated to use the PDMP prior to prescribing an opioid (Butler, Becker, & Humphreys, 2018; Manasco et al., 2016).

Emergency room visits. The rise in prescription opioid abuse and misuse has placed a tremendous burden on the health care infrastructure, accounting for approximately a half million visits to the ER and increasing direct health care cost to many health insurers (Barth et al., 2017). Opioid-related visits are on the rise, especially in the ER, across all demographic groups (Lin et al., 2017). Emergency departments have become a frequent avenue for individuals to obtain prescription opioids and a high-risk setting for physician shopping and drug diversion (Sun et al., 2018). According to Kim, Heard, Heard, and Hoppe (2016) approximately 31% of all ER patients were discharged with an opioid prescription. The ER plays a vital role in the treatment of patients with opioid use and related complications. The availability for ER providers to have access and routinely use the PDMP may provide clinicians the ability to prevent writing for overlapping opioid prescriptions (Geissert et al., 2018). Evidence through research findings does support that a PDMP can change ER physicians’ prescribing plans in 41% of cases and resulted in less prescribing of controlled substance, such as opioids (Griggs, Weiner, & Feldman, 2014).

A thorough review of the significant literature related to prescription drug monitoring program was conducted. Several databases were used to search for the peer-reviewed sources for this project assignment. The databases were:

The prescription abuse of opioids has grown to epidemic proportion in the US, which has increased approximately four-folds since 1999 (Pauly et al., 2017; Sun et al., 2018). The increased use of opioids has demonstrated a correlation to the increased rate of deaths due to prescription opioids overdose (Pauly et al., 2017). As a result of the opioid crisis, evidence suggest that there has been an increase in the number of ER visits, treatment centers, and opioid overdose (Ali, Dowd, Classen, Mutter, & Novak, 2017). Endorsed by various government entities, such as the Centers of Disease Control and Prevention and the DHHS, the PDMP has been identified as the most important policy initiative for reducing prescription drug abuse (Ali et al., 2017; Irvine et al., 2014). The PDMP is designed to track prescribing and dispensing of prescription-controlled substances with the goal to reduce over-prescribing of opioids and to identify individuals with opioid prescriptions from multiple providers. In other words, the PDMP can help to facilitate data sharing among prescribers as a strategy to avert diversion and prescribing to individuals who are at risk of opioid abuse and overdose.

The PDMP presents the opportunity to reduce the likelihood of patients to receive multiple prescriptions from multiple providers. The program can provide health care providers and pharmacists a more comprehensive information about the risk of drug seeking behavior by the patient and inappropriate prescribing practices by providers. Numerous studies about the impact of PDMPs regarding the prescribing practices of opioids by providers have shown that the implementation of PDMP was effective in reducing the number of prescriptions written for opioids and a reduction in overdose death and multiple prescribers (Ali et al., 2017). Bao et al. (2016) found that there was a correlation between the implementation of a PDMP and a reduction in the prescribing of opioids, which includes substantial changes in opioid prescriber rates from before and after the use of the PDMP system. Research data has demonstrated that opioid-related deaths have decreased in states with a PDMP than in states without a PDMP (Ali et al., 2017). For instance, Florida, Georgia, and Oregon has seen an association with a decrease in opioid prescribing patterns (Ali et al., 2017; Deyo et al., 2018). Delcher et al. (2017) demonstrated that the creation of Florida’s PDMP was associated with a 25% decrease in opioid-related deaths and a 29% decline in opioid diversion after implementing their program (Delcher et al., 2017).

A Prescription Drug Monitoring Program. (2020, May 08). Retrieved from https://studymoose.com/a-prescription-drug-monitoring-program-essay 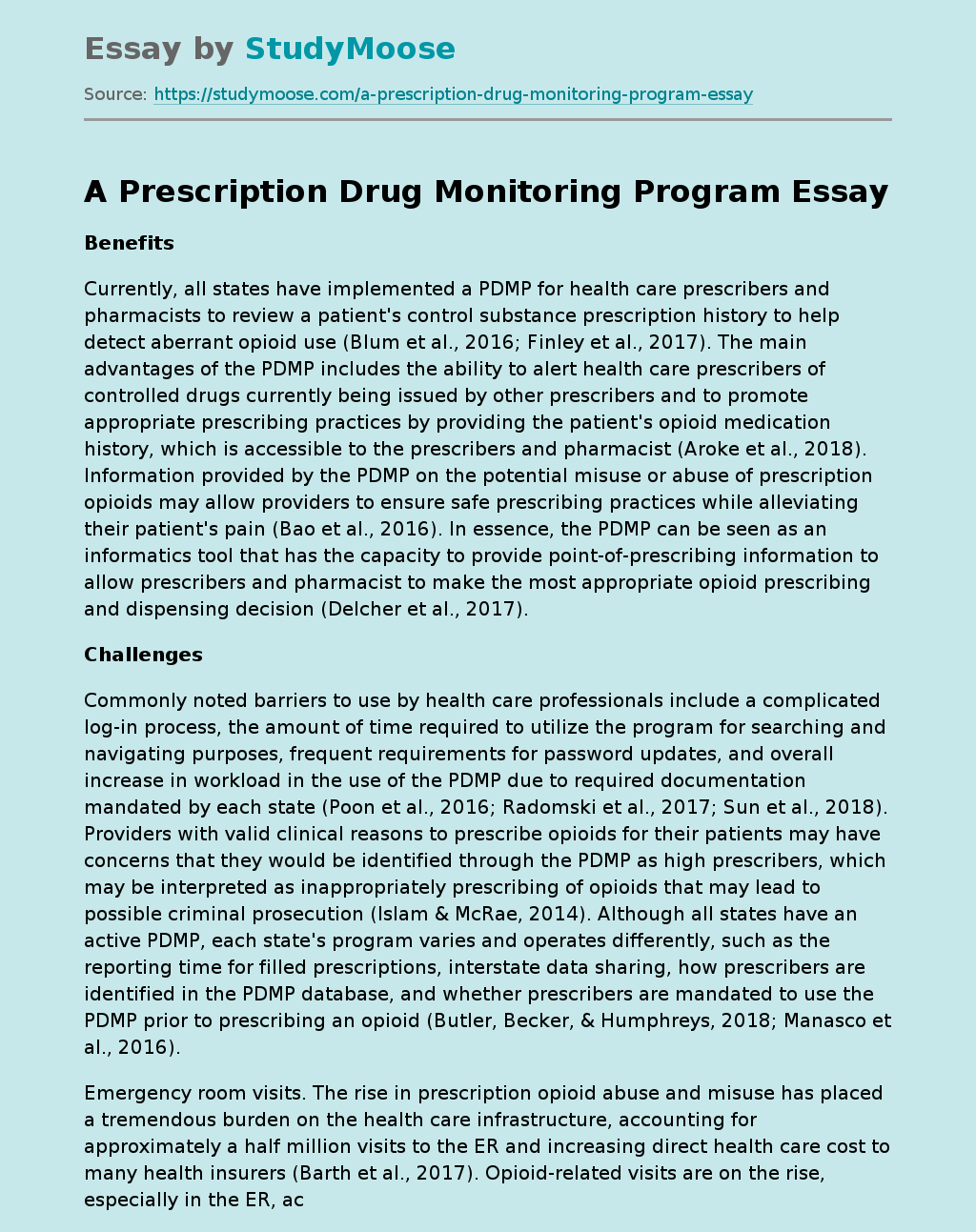