Vertigo is a 1958 film directed by Alfred Hitchcock that has stood the test of time in the horror genre. It is considered to be one of the seminal films in the genre not only because it set the tone for the films to follow but also because it exhibited numerous features and techniques that would serve to revolutionise the way in which movies were made. The camera angles, use of space, cinematography, special effects and sound all contribute to the overall effect achieved.

As such, this essay will examine each of the above with a view to concluding that Hitchcock rejuvenated the horror genre with Vertigo and provided a master class in using cinematic techniques for effect. The first technique of note is the way in which camera angles are used in order to create an atmosphere of fear, giving the impression that the characters are moving in one vicious circle. The use of the camera “… simulates panicky feelings of acrophobia (fear of heights) felt by Scottie Ferguson (James Stewart).

For example, at one point in the film, a staircase is filmed from the very top. This not only alludes to the cyclical nature of the narrative because the bell tower staircase is indeed circular but also narrows the shot. The illusion of falling from a great height is fostered in this shot and indeed in others, like that in which Stewart appears to be standing on the ledge. Furthermore, the camera angles also link directly to the illusion of space: “…serves as a template for key themes: the topography of a city and its surrounding countryside matched by dilemmas of sexual choice, guilt and obsession.

” (Orr, 2005, p. 137). The view from the bell tower always appears to be bleak, thus mirroring the overtones of the plot. The sound used also highlights the cyclical nature of the narrative. In an interview in Sight and Sound, Scorsese pointed out that “… the music is also built around spirals and circles, fulfilment and despair.

Herrmann really understood what Hitchcock was going for – he wanted to penetrate to the heart of obsession. ” (2004). Scorsese’s assessment is correct and this is typified by the scenes in which Madeline and Judy fall to their deaths. The sound is similar in both instances and actively signifies the irony that the starting point of the movie is also the end. However, it is not only the use of music that has a significant impact of the tone of the movie but also the silence. Hitchcock uses silence incredibly well and only provides dialogue as and when he has to.

For example, even the confession scene at the denouement of the movie is not as full of vocabulary as it may be in other films. Words are used sparingly and to make a point. Special effects and cinematographic techniques are not used as sparingly as the dialogue in an attempt to convey the tension desired. Hitchcock undoubtedly used rear projection in Vertigo: “Foreground and background tend to look starkly separate, partly because of the absence of cast shadows from foreground to background, partly because all background planes tend to seem equally diffuse.

” (Bordwell & Thompson, 1996, p. 244). This is an example of both of these features and there are numerous examples of this in the film, such as the point at which Novak and Stewart kiss against the backdrop of the ocean. The actors were filmed and then imposed on a natural backdrop, thus forgoing the use of shadow. As such, there is something innately unnatural about it, which follows the plot. The film stock is also colour and this also helps to eliminate the use of light and dark, thus enhances this particular effect.

In conclusion, there can be little doubt that Hitchcock rejuvenated the horror genre with Vertigo and provided a master class in using cinematic techniques for effect. There are numerous techniques used within the movie to help contribute to the cyclical and somewhat claustrophobic atmosphere. Again, this serves to heighten the tension. The sparing use of dialogue and excellent use of sound effects, when paired with the film stock and clever camera angles, certainly enhance the narrative and ultimately allowed Hitchcock to create one of the best cinematic examples of horror in history. 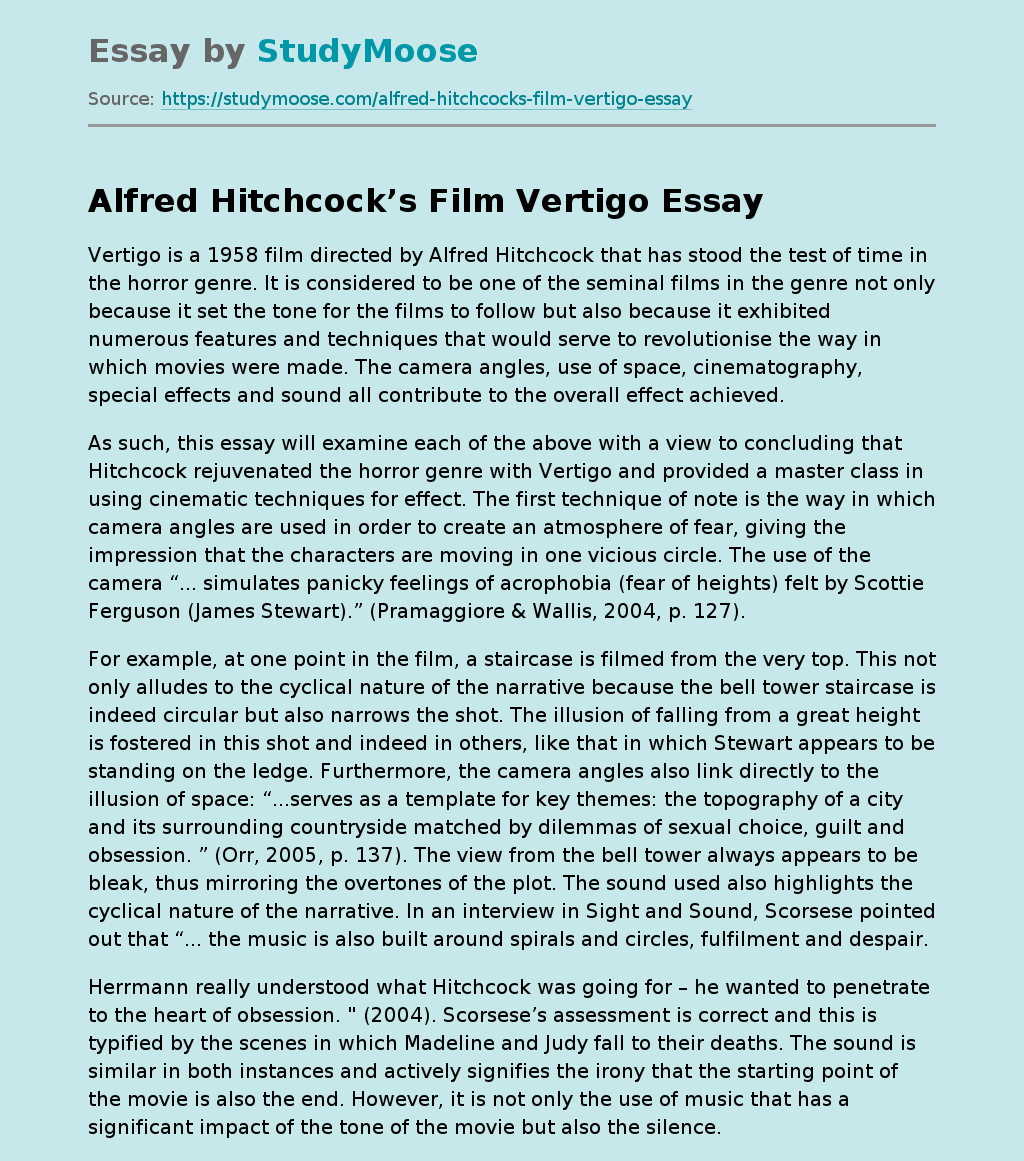