Some people think that chemistry is just about mixing things up and experimenting in test tubes and explosions. Actually chemistry studies everything around us and how they change, for example it tells what your body is made out of. We study chemistry in biology, geology, engineering, and even physics. Chemistry is the science of matter, and how it changes and its chemical reactions, it’s also called as the central science ( the main one) because it connects physics with other sciences.

Turn in your highest-quality paper
Get a qualified writer to help you with
“ Alchemy vs Chemistry ”
Get high-quality paper
NEW! AI matching with writer

Chemistry is important because it explains the world around you, it explains how food changes when you cook it and how it rots. Chemical reactions occur when you breathe, eat, or even setting down watching the T.V. Chemistry was discovered by a Greek man called Leucippus in the fifth century BC. He came up with the idea that the world was made up of atoms or voids. His student Democritus further refined this idea of the atom and improver the theory so it can make more sense.

On the other hand many people did not believe in chemistry and Democritus’ theory. Alchemy, it’s a form of chemistry that was studied in the middle ages, which was concentrating about trying to change a normal metal into gold. It’s the power to change or create things in a way which seems mysterious and magical. It also involves the discovery of panacea, and the proportions of the elixir of immortality and living forever. Aristotle was another Greek philosopher who had a completely different theory than the one with the atoms.

He though that all matters are made up of four elements and they are: Air, Fire, Water and Earth. By physically manipulating the proportions of the elements, matter can be changed from one to another.

This idea was known as transmutation, and the main goal of it is to transfer ordinary metal into gold. Aristotle did not have a proof for his theory However, because he was trusted and respected this idea has been for 2000 years even though they were wrong, and still until now there are some people who believe in alchemy and alchemists still exist. Some people think that chemistry and alchemy are the same, but they are different in many ways. First of all, alchemy rely a lot on the spiritual connections to the four elements and they are fire, water, earth and air while chemistry is a lot more logical, factual and scientific based. Second of all, chemistry is considered as science, while alchemy is not. Third of all, chemistry is more famous than alchemy and it’s a part of our modern society and we are used to it. Finally, chemistry makes more sense than alchemy and it does not risk our lives looking for the elixir like alchemy. Chemistry and alchemy does not only have differences, they also have some similarities. First of all, they all began as alchemy in the seventeenth century in the medieval Europe. Second of all, the both involve the natural elements which are now arranged on a periodic table. Third of all, they were both considered as science back then because people didn’t know who is right and who is wrong so they used them both as science. Finally, back in time the churches were against both of them because they thought that they used magic and proportions which what they are totally against. 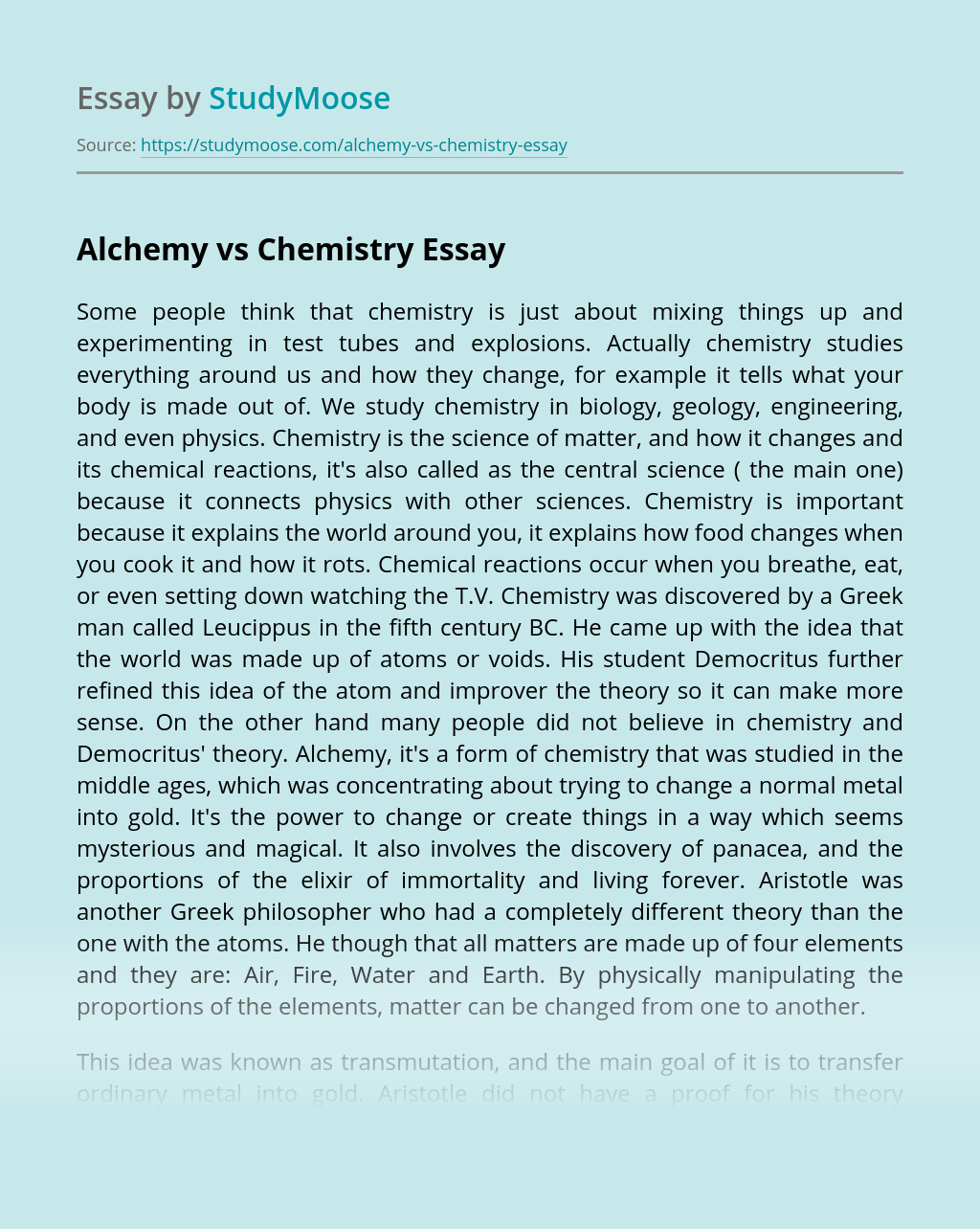 Turn in your highest-quality paper
Get a qualified writer to help you with
“ Alchemy vs Chemistry ”
Get high-quality paper
Helping students since 2015
Stay Safe, Stay Original