African American spirituality provides a rich lens into the heart and soul of the black church experience, which often overlooked in the Christian spiritual formation literature. Spirituals are also sometimes regarded as codified protest songs, with songs such as “Steal away to Jesus, ” composed by Wallis Willis, being seen by some commentators as incitements to escape slavery after the Underground Railroad of the mid- nineteenth century used terminology from railroads as a secret language for assisting slaves to freedom and it is often speculated that songs like “I got my ticket” may have been a code for escape.

Don't use plagiarized sources. Get your custom essay on
“ African American Spirituality ”
Get custom paper
NEW! smart matching with writer

Hard evidence is difficult to come by because assisting slaves to freedom was illegal.

A spiritual that was certainly used as a code for escape to freedom was “Go down, Moses, ” used by Harriet Tubman to identify herself to slaves who might want to flee north. This essay is recognizing four areas of the lived experiences of African Americans which are persevering in pain and suffering, turning to God for strength, experiencing a living and passionate faith and lastly affirming God’s intention for freedom and justice to be afforded to every person.

Perseverance in pain, suffering, and the testing of faith through a long history of racism and discrimination provides hope in a long-suffering God who suffers with us, regardless of ethnicity, and offers us comfort. This message of perseverance provides rich opportunity for dialogue with the persecuted church worldwide that is suffering because of discrimination against Christians in diverse areas of the world, not the least of whom are in the Middle East.

Slaves consistently experienced severe and inhumane treatment including humiliation, exploitation, intense suffering, and even death. It stands to reason why slaves generally, and those who embraced Christianity specifically, resonated with the hope for freedom against the backdrop of oppression.

A quote from C. Eric Lincoln and Lawrence H. Mamiya said during this inner angst, ‘During slavery [freedom] meant release from bondage; after emancipation it meant the right to be educated, to be employed, and to move freely from place to pace. In the twentieth century freedom means social, political, and economic justice.’ Noting this consistent theme throughout black history, Lincoln and Mamiya observe that freedom has always meant the absence of any restraint which might compromise one’s responsibility to God. Second, turning to God for strength, provision, and protection offers a consistent theme from the time of slavery until now. They practiced spirituality through prayer, meditation and inspirational readings to garner strength, maintain a sense of inner peace and reflect on stressful work situations. African American uses religion and spirituality to cope and construct meaning in times of adversity.

Third, the passionate expression of African American spirituality evidenced in worship, preaching and Scripture, the community of faith, prayer experiences, and community outreach that contribute to health and vitality offers the church worldwide a great reminder that the Christian faith. As slaves were introduced to the faith, usually through Christian slave owners, they frequently encountered prohibitions related to full participation in worship services, in addition to being restricted from learning how to read. It was thought that by reading, slaves would become educated and thereby become more emboldened to seek their freedom. Thus, many slave owners surmised that ‘the freeing of the soul in Christ did not alter the bondage of the body in any way.’ Consequently, while some benevolent slave owners treated slaves with dignity, many did not. Christian slave owners frequently applied various constraints to minimize slaves’ participation in church activity.

Fourth, African American spirituality affirms that freedom and justice are God-given values that should be accorded to every human being regardless of ethnicity, as each is made in God’s image. We serve a loving and just God who will one day make things right, as we look to the glory that is set before us. African American Christians offer a prophetic voice that liberty and justice for all is a fight worth fighting, then appreciating and celebrating our unique Christian cultural and historical experiences that have shaped us becomes more vital. As this essay has focused on African American spirituality, specifically the shaping quality of slavery, the development of the Black Church, the influence of the Civil Rights Movement under the leadership of Dr. King, and four spiritual practices that have developed over time.

While the American church has many opportunities to make progress in this regard, the time is now to work toward establishing unity, not uniformity, by honoring cross-cultural diversity. In conclusion, spirituality not only serves as a coping mechanism but also may promote healthy living, and identity development to foster meaning of diverse experiences. Spirituality is the commitment to a particular paradigm that gives honor to the principles interconnectedness and the inner being. Spirituality in this case was being use to a degree to which individuals endorse relationships with God or a transcendent force that brings meaning and purpose to their existence. 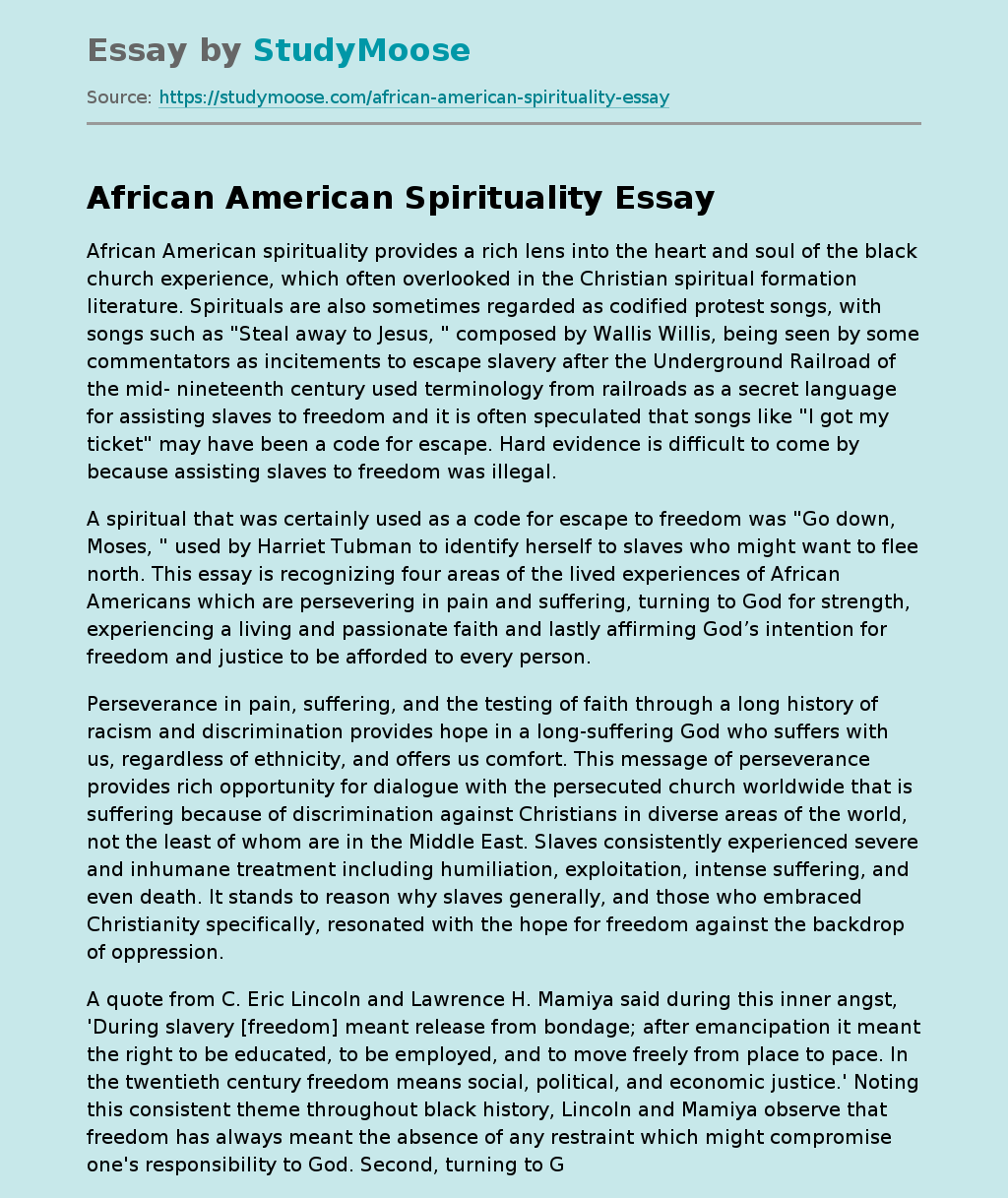