The western culture has always been known for its progressive nature. It has given its followers a lot of freedom and openness. But there are times when the freedom gets on to you. This is when one starts feeling the void and the emptiness and starts craving for some sort of support or someone to look upto as a guiding force. Since many decades, the westerners have been looking towards India to save their fizzing hearts and morality by its spiritualism.

Turn in your highest-quality paper
Get a qualified writer to help you with
“ India: Land of Diversity ”
Get high-quality paper
NEW! AI matching with writers

This is because India is the land of sages and great thinks and reformers who have reached far and wide spreading the true message of god. Their sayings and preaches have been guiding all of us since ages to listen to the voice inside us and lead a meaningful life. The growing impetus of spiritualism in the world was born in India and it has been the flag bearer of all this since ages.

India is a land where many different religions and practices live together in complete conglomerate, side by side.

India has always been open to visitors. There has been an old famous saying in India which says: “Atithi Devo Bhava” which literally translates to say that guest is god. The Indians have lived by this thought since the very beginning and still practice it. This is the reason why when any foreigner came to India (with whatever motives in mind, India was there with arms wide open to welcome them. It started with the Aryans, then came the Persians, Mughals, British French and many more.

All were welcomed in India with equal gratitude. The humbleness and hospitality has also been prevalent till now. It welcomed the Dalai Lama when he escaped from Tibet after the Chinese agression.This is another example of the nobility that India has been Famous for. India and its have also been famous for helping out others. It helped Bangladesh to win freedom and independence from the erstwhile Pakistan. The practices of helpfulness and aid have been carried out like a tradition since ages, transferred from one generation to another.

India has become the land where cultures and thoughts intermingle to provide an altogether new way of living to the people. Since being a home to people from different cultures, the residents have learned how to respect all the various cultures and traditions. Come to India-the only country in the world where you shall find a Hindu temple, a church and a mosque adjoining each other and followers of any of them visiting each. This is the best part of the underlying Indian thought – tolerance and respect for everyone. So whatever be your culture, beliefs, religious practice, India can surely make you feel at home.

India is truly a land of great cultural heritage and enriched traditions. The influence of various cultures on each other is evident from the architecture styles, language as well as the practices in various parts of the country. This innate mixture of features of various cultures and traditions gives India the place and the reputation of being the most tolerant and patient country in the world. 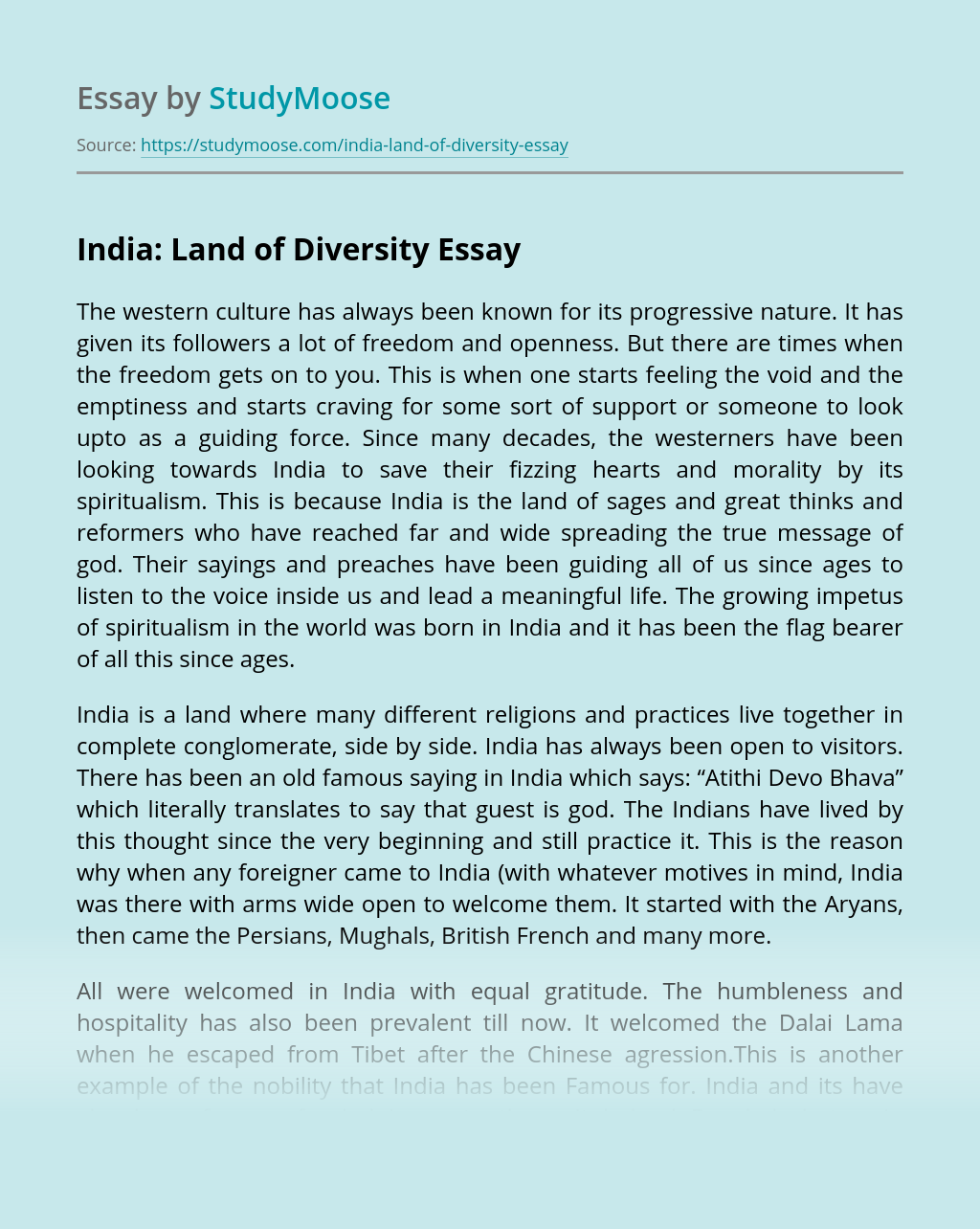 Turn in your highest-quality paper
Get a qualified writer to help you with
“ India: Land of Diversity ”
Get high-quality paper
Helping students since 2015
Stay Safe, Stay Original