The imagery in John Donne’s poetry emphasizes the pleasure humans derive from sensual experiences. He uses intricately related comparisons to illustrate how the most basic acts are infinitely meaningful and vice versa. In fact, his use of metaphysical conceits, in Elegy 19: To His Mistress Going to Bed and several of his Holy Sonnets either elevates the sexual act to the level of a religious experience or diminishes the latter to the level of the former. Firstly, to understand the strangeness of the imagery in Donne’s poetry, one must consider the purpose of the metaphysical conceit and his use of it.

Don't use plagiarized sources. Get your custom essay on
“ John Donne’s poetry ”
Get custom paper
NEW! smart matching with writer

According to the Norton Anthology, a metaphysical conceit is a more intellectualized, many-leveled comparison that gives a strong sense of the poet’s ingenuity in overcoming obstacles (Norton Anthology Vol. I, 2952). Donne’s goal is the same as most poets and he arguably uses the conceit to construct a penetrating commentary on life. Therefore, he daringly equates the sexual act to the one moment he thinks man comes closest to having an earthly experience of heaven.

In Elegy 19, his mistress’ belt becomes “heaven’s zone,” the zodiac, as he writes, “Off with that girdle, like heaven’s zone glistering” (Longman Anthology, 1685).

A bed becomes a temple and angels are attendants of pleasure: “In this love’s hallowed temple, this soft bed. In such white robes, heaven’s angels…A heaven like Mahomet’s paradise…” (Longman Anthology, 1685). Heaven is a sensual paradise where man becomes a woman’s clothing or the white raiment of the penitent: “…cast all, yea, this white linen hence, Here is no penance, much less innocence.

To teach thee, I am naked first; why then What need’st thou have more covering than a man” (1685). Elegy 19, it seems, allegorizes the mistress as she arguably represents the church.

The bed as a temple is arguably a church while the white robed angels are reminders of the Cistercian order, noted for their white habits. Furthering his discussion of the Church Donne speaks of it in astonishing terms, comparing it to artfully dressed women, enticing men: “…Like pictures, or like books’ gay coverings, made For laymen, are all women thus arrayed…” (Longman Anthology pg#). Continuing this odd juxtaposition of sexual and religious, he refers to the importance of leaving artifice behind when dealing with Church matters: “Full nakedness!

All joys are due to thee As souls unbodied, bodies unclothed must be, To taste whole joys…” (pg#). Here the Church figures as a place of purity into which only those lacking an earthly facade may enter. He outrageously asserts a desire to know his mistress as intimately as midwife would know her: “Then since that I may know, As liberally as to midwife show Thyself…” (pg#). This assertion is only more outrageous, as it speaks of a level of devoutness, which desires to know the Church (religion/God) so intimately, and in such terms.

However, Donne’s unusual use of conceit also appears in his Holy Sonnets where one would not expect to find such. For example, in Sonnet 1, he says, “repair me now, for now mine end doth haste; I run to death and death meets me fast, And all my pleasures are like yesterday…” (Longman Anthology, pg #). The death, which the speaker rushes toward is arguably, what Shakespeare terms the “little death,” in other words sexual climax. Nevertheless, it is not just the provocative wording in Donne’s poems, which suggest sensuality to readers.

The imagery in Elegy 19 suggests fecundity and as a result, the sexual act. Hills, symbols suggesting fertility, appear in the elegy as the speaker describes his mistress’ body by comparing it to a moment “when from flowery meads th’ hills shadow steals” (Longman Anthology, 1685). One can only suppose he refers to parts of her form that lie in shadow, because of their position beneath more prominent anatomy. Flowers, which also appear in the line, equate to feminine virtue where for example deflowering describes a loss of virtue.

In this instance, flowery meads may symbolize the external female sex, especially when one considers the two lines, which proceed: “Off with that wiry coronet and show The hairy diadem which on you doth grow…”(1685). Upon establishing why Donne uses the metaphysical conceit and what he is able to do with it, there remains another issue to confront. Donne compares the sexual act to a religious experience. It is shocking to consider, so maybe Donne’s true intent, is to inspire readers to become sensually ensnared in his commentary on life.

A commentary focused on the similarities between man’s religious and sexual experiences. Donne likely focuses on these experiences out of something other than sheer perversity or a desire to shock. As a young man, he was a rake, and like Lord Byron, a vast amount of sexual experience informs his poetry. Very likely, when Donne was appointed to the church in his middle age, his discovery of a new passion for the Church and God reminded him of the more carnal passions of his youth. Although a gross oversimplification, his work is likely an amalgamation of his experiences as young libertine and a middle-aged preacher.

What results is a penetrating commentary on life that neither diminishes the religious experience nor elevates the sexual experience. Rather, Donne’s Elegy 19, as well as his Holy Sonnets, emphasizes the daring and ingenuity of a brilliant poet as he reconciles the two opposing phases of his life. Works Cited “John Donne. ” The Norton Anthology English Literature . Volume I. 7th edition. Ed. M. H. Abrams and Stephen Greenblatt. New York: W. W. Norton & Company, 2000. 1233-1235. John Donne. “Elegy 19” and “Holy Sonnets”. The Longman Anthology. 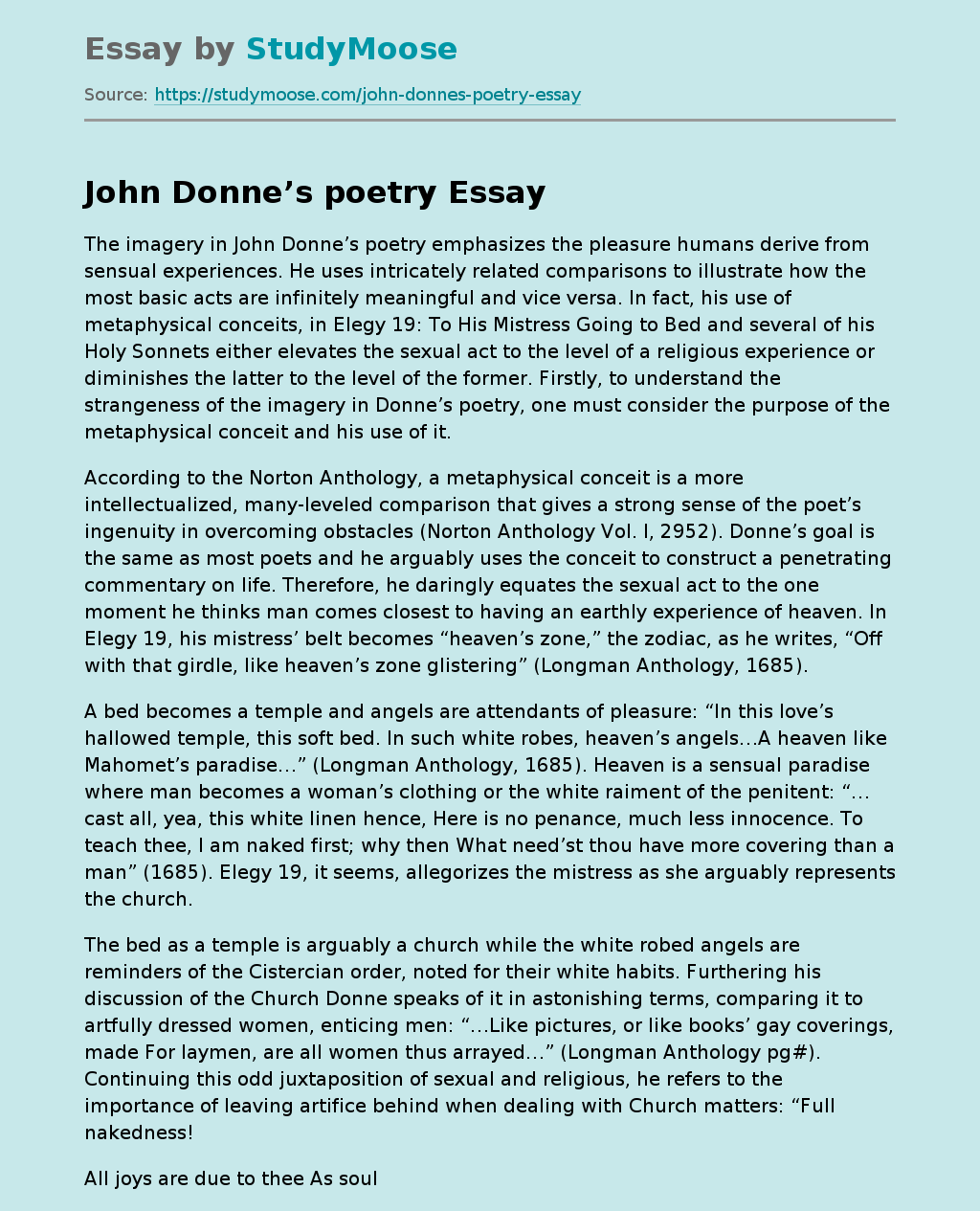