Donne’s “A Valediction: Forbidding Mourning” and Marvell’s “To His Coy Mistress” are identical and contradictory in many respects. Although “A Valediction” concentrates on the comfort of love on parting and “To His Coy Mistress” contemplates about sexual love and the briefness of life, both exemplify characteristics of metaphysical poetry. Metaphysical poetry is about the profound areas of experience, especially about love, romantic and sensual, and, to a lesser extent, about pleasure, learning, and art.

Metaphysical poems are brief but intense meditations, characterized by a striking use of wit, irony and wordplay.

Don't use plagiarized sources. Get your custom essay on
“ Compare and contrast Donne’s “A Valediction: Forbidding Mourning” ”
Get custom paper
NEW! smart matching with writer

Beneath this somewhat formal structure is the underlying arrangement of the poem’s argument. In “To His Coy Mistress” the explicit argument (Marvell’s request that the coy lady yield to his passion) is a background for the more serious argument about the need for pleasure and to live life to the fullest before death. The outward lightness conceals a deep seriousness of intent. This poem finds the pretence of passion used to hang serious reflections on the brevity of happiness, or in other words, the main point of a carpe diem poem.

In “A Valediction: Forbidding Mourning” the argument is not logically persuasive as Marvell’s poem proved, but the cleverness and subtlety of Donne’s method are diverting in that a lonely woman might be comforted. She cannot change the fact of the lover leaving, but the poem states evidence of the integrity of the love he has professed thus far.

The imagery used by the poets can also be applied as a basis for comparing and contrasting.

Donne writes in a wide-ranging and obscure method. He did not write for publication, but showed poems to friends whom he supposed to be well read enough to understand these references. Donne’s imagery draws on the new learning of the English renaissance and on topical discoveries and exploration. For example, line 11’s “But trepidation of the spheres” is a reference to the spheres of cosmology during the era. With Marvell, imagery is more difficult.

Unlike Donne who scatters metaphors freely, Marvell is more selective and sparing. Very often the image is more memorable and striking than the idea it expresses, as with the “deserts of vast eternity”, while frequently one finds an idea which cannot be understood except as the image in which Marvell expresses it, as with the “amorous birds of prey, rather at once our time devour”. In any case, similarly with these two poets, the use of the metaphor remains subordinate to the metaphysical argument.

Both poets, though they occasionally display their higher learning, write with fairly colloquial voices. However, Marvell exhibits more variety in the voice. The second person is found in “To His Coy Mistress”. When Donne does this, it is assumed that an intimate address to a real woman is intended. But Marvell’s “Coy Mistress” is obviously absent, a mere excuse for Marvell to examine his real carpe diem subjects, time and the shortness of human happiness.

The structure and punctuation in each poem also reveal key differences. The same eight-syllable iambic line is continuously found in “To His Coy Mistress”. The vigorousness of the argument appears in the breathless lines. Few are end-stopped, and the lines have the rough power of speech. Donne, on the other hand, carries his argument using four line stanzas in “A Valediction: Forbidding Mourning”. Unlike Donne, who is prepared to allow some lack of punctuation (between first and second stanzas and frequently within all the stanzas), Marvell’s stanza here has a near metronomic quality. A punctuation mark at the end of the second line exaggerates the rhyming syllable, which is matched at the end of the stanza.

Although discussing different subjects, both poems are examples of metaphysical poetry. Through their different images and styles of writing, Marvell was able to illustrate the carpe diem theme of the shortness of life and living it to the fullest, while Donne expressed the consolation of love on leaving. The authors are able to transmit their messages to the reader through these difference and similarities, serving their literary purpose. 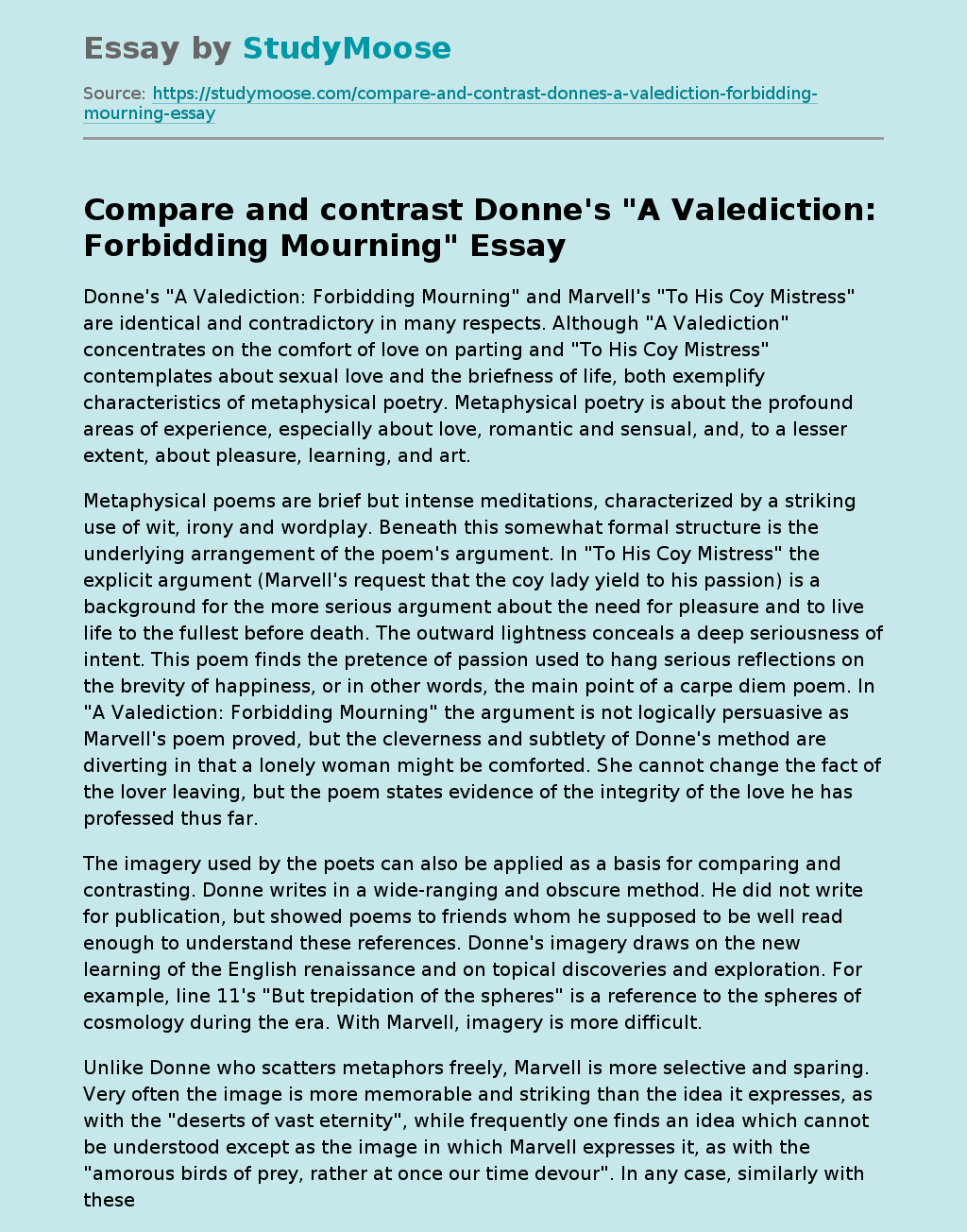