In his novel Dracula, Bram Stoker seeks to highlight the importance of following gender roles in the late 19th century. Throughout the story, many women rebel against societal gender norms and embrace their sexuality. In this novel, Bram Stoker suggests that women should follow their traditional Victorian roles and that female sensuality and rebellion will result in the destruction of a woman and her character.

Don't use plagiarized sources. Get your custom essay on
“ Dracula: Female Sensuality and Rebellion ”
Get custom paper
NEW! smart matching with writer

This statement proves that men of this time period had many more freedoms than and were generally superior to women, and Bram Stoker analyzes this social construct in Dracula. Man’s control over woman in this novel is shown in Dracula’s character. Dracula is the only male vampire in the novel as well as the implied leader of the rest of the vampires. It is Dracula who is responsible for exerting control on women such as Lucy and Mina by turning them into vampires.

His male dominance is clear after Dracula is attacked by the band of men and he exclaims, “‘My revenge is just begun!… Your girls that you all love are mine already; and through them you and others shall yet be mine – my creatures, to do my bidding and to be my jackals when I want to feed’” (Stoker 325). Dracula says this with no regard to the women at all; he treats them as objects, taking advantage of their passivity and exerting his power over them as was typical of men in this time period.

In this novel, female sexuality is presented in a negative light as aggressive and violent. This is shown in various places throughout the story, most notably with the three vampire women. In the first scene of the novel when Jonathan is in Dracula’s mansion, the three women try to seduce him against his will. Upon seeing the women, Jonathan states, “There was something about them that made me uneasy, some longing and at the same time some deadly fear” (Stoker 43). Jonathan goes on describing the dark sensuality of the women, referring to them as “the three terrible women licking their lips” (57). Jonathan repeatedly uses the word “voluptuous” to describe the three vampires, writing that they have “voluptuous lips” and a “deliberate voluptuousness” in their approach to him (46). This word choice emphasizes the women’s overt sexuality, which Stoker associates with aggressiveness and cruelty towards children. Harker writes in his journal about the vampiresses, stating that one “…pointed to the bag… which moved as though there were some living thing within it… There was a gasp and a low wail, as of a half-smothered child. The women closed round, whilst I was aghast with horror, but as I looked they disappeared, and with them the dreadful bag” (45). The women’s brutality in their treatment of the child leads Jonathan to conclude that these creatures are hardly women at all, basing this judgment off of the traditional women with whom he is familiar, such as Mina. The three vampiresses’ lack of maternal feelings serves to emphasize that a woman’s ideal role in this novel is as an innocent mother-figure, and that any woman who strays from that role is evil. These “voluptuous” women are shown as monsters, their sexuality as animalistic and murderous. The three vampire women violate Stoker’s ideas about womanhood and femininity, and it is because of this that their characters are destroyed by the end of the novel.

Throughout the novel, the more concealed sensual side of Lucy Westenra also becomes evident. Lucy is constantly torn between the need to conform and the desire to rebel; she is dissatisfied with the female social tendency towards compliance and obedience (Senf 42). One example of Lucy’s inherently rebellious nature is shown at the beginning of the novel, when she writes to Mina, “Why can’t they let a girl marry three men, or as many as want her, and save all this trouble?” (Stoker 66). Lucy always has this natural wild side to her, yet she is never really portrayed as a physically sexual being until she is transformed into a vampire. In his analytical essay “Sex and Sexuality in Dracula,” Mitchell R. Lewis considers that “The contrasting of angelic purity and monstrous sexuality is evident in the portrayal of Lucy… Lucy vacillates between monstrosity and purity until… she is completely transformed into a sexual vampire” (1).

Lucy is portrayed as a sexualized being after she is turned into a vampire who seeks to inspire an intimate response in the men around her. Upon meeting the men in the graveyard, Dr. Seward writes that Lucy “said in a soft, voluptuous voice… ‘Arthur!… Kiss me!’” (Stoker 167). Lucy’s dark, villainous seductiveness is evident here, and it is clear that she wants to enkindle sensual passion in Arthur in order to turn him into a vampire. When Seward sees the undead Lucy outside of her tomb later in the novel, he says, “we recognized the features of Lucy Westenra… but yet how changed. The sweetness was turned to… cruelty, and the purity to voluptuous wantonness” (226). Throughout the next four paragraphs of this section, Seward describes Lucy with “eyes unclean and full of hell-fire” and a “voluptuous smile,” stating that she speaks with “a languorous, voluptuous grace.” Again, there is a noticeable repetition of the word “voluptuous” as there was in the scene with the three vampire women at the beginning of the novel. Parallels can be drawn between these two sections of the story. Lucy, like the three vampire women, has an excessive sensuality about her that is hostile. After Lucy dies she is turned back from a monstrous sexual being with an “unspiritual appearance” to “Lucy… with her face of unequalled sweetness and purity” (232). It is clear that Lucy as an erotic being was deeply evil to the point of being demonic, yet the moment that she is transformed from that sinful, sexualized being, she is again characterized as pure (Stevenson 145). In the scene of Lucy’s death, Bram Stoker insinuates that it is because of her rebelliousness and sensuality that she meets a tragic end where she is killed, beheaded, and her mouth filled with garlic.

On the other hand, Mina, with her compassion and sexual innocence, is characterized as the quintessential woman throughout Dracula. Mina is the ideal wife of this time period, considering herself submissive to her husband and invariably putting his needs before her own. For instance, Mina writes to Lucy early in the novel, “I have been working very hard lately, because I want to keep up with Jonathan’s studies… When we are married I shall be able to be useful to Jonathan…” (Stoker 61). Comments like these show Mina’s determination to be the perfect wife and assist her husband when he might need it. Furthermore, Mina adheres to traditional gender roles throughout her marriage to Jonathan, as she never once gives voice to any sexual desire. Also, contrary to Lucy and the three vampire women, Mina is portrayed as a true mother-figure. She considers herself lucky to have so many strong men watching out for her well-being, and in turn is always willing to offer them emotional support as a mother would with their child. For example, following Lucy’s death, Mina allows Lord Godalming to cry to her, remarking that “We women have something of the mother in us that makes us rise above smaller matters when the mother-spirit is invoked; I felt this big, sorrowing man’s head resting on me, as though it were that of the baby that some day may lie on my bosom, and I stroked his hair as though he were my own child” (246). When Quincey Morris enters the room directly after this incident, he says to Mina that “‘No one but a woman can help a man when he is in trouble of the heart’” (247), implying that she has fulfilled her roles as a woman. Mina is described as angelic and kind-hearted in many parts of the novel; she is portrayed as the depiction of moral purity as was expected of an ideal Victorian woman.

Mina’s perfection as a woman is further emphasized as the story progresses. As literary critic Carol Senf states, “the second half of Dracula… shifts from the presentation of women as vampires to focus on a woman who is the antithesis of these destructive creatures” (34). Even after Mina is turned into a vampire, she continues to fulfill her established roles as a woman and act in ways that will benefit the men around her. For instance, Mina allows Van Helsing to hypnotize her as much as he might need in order to obtain information about the ringleader of the vampires. She also tells the men not to discuss their plans in front of her in fear of them getting back to Dracula, as much as it pains her to not know what the men are doing. Mina even goes as far as to make the men promise to kill her before she can betray them (Stevenson 139). As a model of domestic propriety, Mina rejects openness and the pursuit of her own desires, preferring instead to be dutiful and deferential towards the band of men (Senf 36). Although her physical body is tainted and scarred both from Dracula’s bites and the Host touching her forehead, Mina’s soul remains pure. It is this that sets her apart from the other vampire women. Because of her embodiment of the perfect woman of the time, Mina escapes the fate of the other women and even is able to take part in the destruction of Dracula.

At the time Dracula was written, women were expected to follow their traditional Victorian gender roles, and Bram Stoker shows that straying from societal gender roles results in the destruction of a woman’s character. The three vampire women and Lucy become sexual, rebellious, and in turn evil creatures, and consequently they have all been destroyed by the end of the novel. Mina, on the other hand, adheres to conventional gender roles of the time period, and because of this she ends the novel alive and well. Evidently, not following traditional societal gender roles leads to the destruction of women’s characters in this novel. 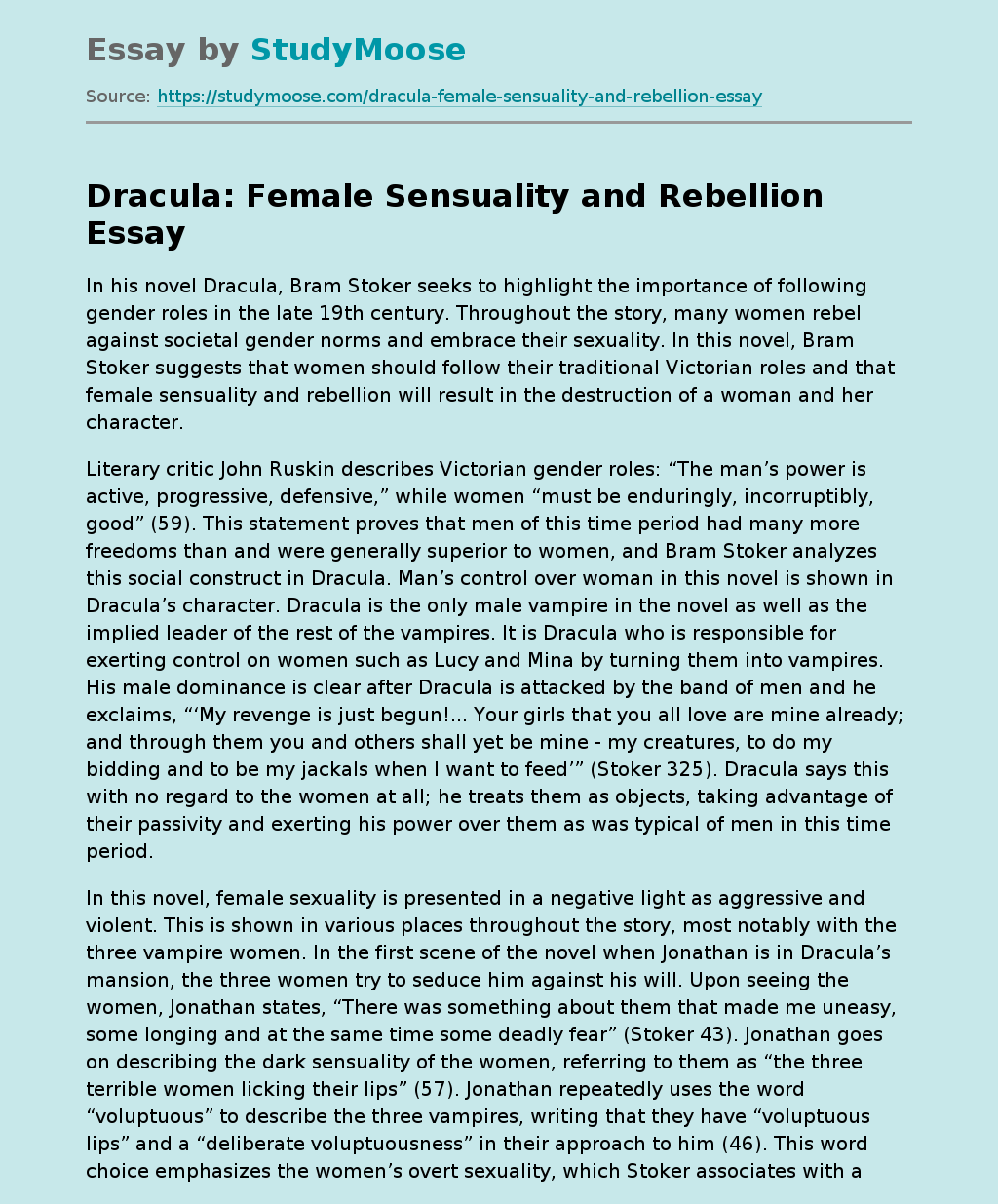