Aestheticism is presently defined by the Encyclopedia Britannica as “intended to designate a scientific doctrine or account of beauty, in nature and art, and for the enjoyment and originating beauty which exists in man”. In other words, aestheticism is a philosophy of beauty. An Aesthete has a great appreciation for nature. One may look at an object, place, or person and perceive it a different way than another person may perceive it. For an Aesthete to obtain pleasure, “it is the perspectives of perception that is necessary to an understanding of both appreciation and creation”.

Don't use plagiarized sources. Get your custom essay on
“ Aestheticism: Philosophy of Beauty ”
Get custom paper
NEW! smart matching with writer

Aestheticism is a very deep and meaningful philosophy whose meaning has been changed and interpreted by many historical figures such as Alexander Baumgarten, Immanuel Kant, and Oscar Wilde. The philosophical discipline of aesthetics did not receive its name until 1735, when the twenty-one year old Alexander Gottlieb Baumgarten introduced it in his Halle master’s thesis to mean episteme aisthetike, or the science of what is sensed and imagined.

Initially, the focus of aestheticism was not so much on art as it was on the experience of, and judgments about, beauty in all its forms. Aesthetics is necessarily interdisciplinary and may be interpretive, prescriptive, descriptive, or a combination of these. The younger Baumgarten started at the university at sixteen (in 1730), and studied theology, philology, poetry, rhetoric, and philosophy, especially Leibniz, whose philosophy was not banned.

He began teaching there himself in 1735, upon the acceptance of his thesis on poetry, and published his Metaphysics in 1739. In 1740, the same year as he published his Ethics, he was called to a professorship — or more precisely, ordered to accept it — at another Prussian university, in Frankfurt an der Oder.

The first volume of his Aesthetica appeared in 1750. It was written in Latin, like Baumgarten’s other works, and was the first work ever to use the name of the new discipline as a title.

The next year, however, Baumgarten’s health began to decline and a second volume of the Aestheticacame out only in 1758, under pressure from the publisher. Baumgarten’s Meditations on Poetry conclude with his famous introduction of the term “aesthetics”: “The Greek philosophers and the Church fathers have always carefully distinguished between the aistheta and the noeta,”that is, between objects of sense and objects of thought, and while the latter, that is, “what can be cognized through the higher faculty” of mind, are “the

object of logic, the aistheta are the subject of the episteme aisthetike or AESTHETICS,” the science of perception. However, in the 18th century, the German philosopher Immanuel Kant defined aestheticism as both “the analysis of taste” and “the analysis of sensible cognition or intuition”. Immanuel Kant was a Prussian philosopher who is widely considered to be a central figure of modern philosophy. He argued that human concepts and categories structure our view of the world and its laws, and that reason is the source of morality.

One part Kant’s philosophy of aestheticism was the “Deduction of Taste”, which instilled that everything interesting and fundamental happened in the formation of concepts, or in the receiving of intuitions. But now Kant argues that judgment itself, as a faculty, has an fundamental principle that governs it. This principle asserts the purposiveness of all phenomena with respect to our judgment. In other words, it assumes in advance that everything we experience can be tackled by our powers of judgment. Normally, we don’t even notice that this assumption is being made, we just apply concepts, and be done with it.

For Kant, the other basic type of aesthetic experience is the sublime. The sublime names experiences like violent storms or huge buildings which seem to overwhelm us; that is, we feel we ‘cannot get our head around them’. This is either mainly ‘mathematical’ – if our ability to intuit is overwhelmed by size (the huge building) – or ‘dynamical’ – if our ability to will or resist is overwhelmed by force (e. g. the storm). The problem for Kant here is that this experience seems to directly contradict the principle of the purposiveness of nature for our judgment.

And yet, Kant notes, one would expect the feeling of being overwhelmed to also be accompanied by a feeling of fear or at least discomfort, whereas, the sublime can be a pleasurable experience. In contrast, Oscar Wilde prefaced his novel, The Picture of Dorian Gray, with a reflection on art, the artist, and the utility of both. After careful scrutiny, he concludes: “All art is quite useless” (Wilde 4). In this one sentence, Wilde encapsulates the complete principles of the Aesthetic Movement popular in Victorian England. That is to say, real art takes no part in molding the social or moral identities of society, nor should it.

Art should be beautiful and pleasure its observer, but to imply further-reaching influence would be a mistake. The explosion of aesthetic philosophy in fin-de-siecle English society, as exemplified by Oscar Wilde, was not confined to merely art, however. Rather, the proponents of this philosophy extended it to life itself. Here, aestheticism advocated whatever behavior was likely to maximize the beauty and happiness in one’s life, in the tradition of hedonism. To the aesthete, the ideal life mimics art; it is beautiful, but quite useless beyond its beauty, concerned only with the individual living it.

Aesthetics found that through their great interest in beauty, pleasure that is derived from objects of art is more beautiful than other pleasures. Overall, many philosophers have interpreted the principle of aestheticism in their own ways. Without aestheticism, the deep understanding we now have of the connection of our lives with all forms of art would not be possible. Therefore, after centuries of conceptual making, aestheticism remains as a very complex subject which any poetic heart would be delighted to learn for the benefit of further understanding the purpose for the existence of art.

Art through music, paintings, dance, and performance are all unique, but alike in one way: they are products of an artist’s ability, and desire, to create beauty. 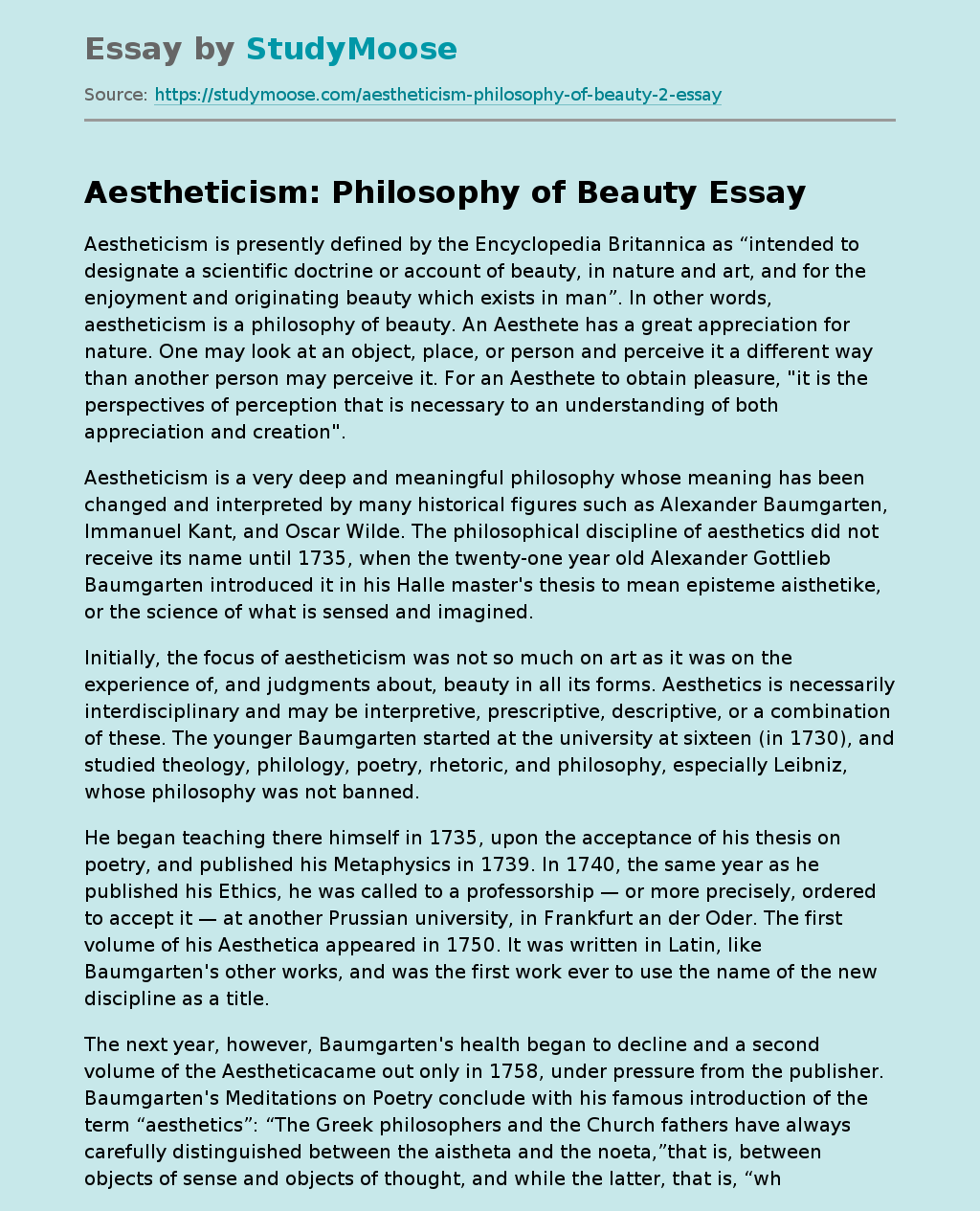