Aestheticism and the History of the Aesthetic Movement

The term “Aesthetic Movement” refers to the introduction of principles that emphasized art in the production of furniture, metalwork, ceramics, stained glass, textiles, wallpapers, and books. One important channel for its widespread popularity was the Philadelphia Centennial Exposition of 1876. There, in numerous displays, many Americans, artists and craftsmen as well as the general public, were exposed to art objects from a great variety of nations and periods. Most writers on the Aesthetic Movement agree that its roots lie in the reaction to Industrialization in mid-19th century England and to the Great Exhibition of 1851 in London which also was the start to industrial, military and economic superiority of Great Britain (Bolger 19).

Don't use plagiarized sources. Get your custom essay on
“ Aestheticism and the History of the Aesthetic Movement ”
Get custom paper
NEW! smart matching with writer

Aestheticism belongs to the anti-Victorian reaction and had post-Romantic roots, and as such anticipates modernism. It took place in the late Victorian period from around 1868 to 1901, and is generally considered to have ended with the death of Oscar Wilde in Paris France on November 30, 1900. Wilde was born in Dublin, Ireland on October 16 1854.

His main contributions to this movement include his only novel ever written, The Picture of Dorian Gray (1890) and plays such as A Woman of No Importance, 1893 (Eisner 20-23). Belief in the power of art was strong without social critiques mounted by John Ruskin who was of Victorian influence and William Morris who was associated with the Pre-Raphaelite Brotherhood as well as the Arts and Crafts movements. Artistic values were placed above ethical ones. The central idea of this movement was “art for arts sake” coined by Victor Cousin.

Cousin was a French philosopher born in 1792 and died in 1867. James Abbott McNeill Whistler, was the one who adamantly furthered the meaning of Cousin’s phrase which meant a “celebration of universal form and style apart from the historical, social, political and moral contexts in which works of art were created or used centered in decorative arts, also seen in art such as paintings and architecture” (Eisner 14). Whistler was another advocate of aestheticism, born July 11, 1834 and died July 17, 1903. He was American born, but British at heart, his most famous painting being the Whistler’s Mother (1871). Lastly, one more contributor to the aesthetic movement was Aubrey Vincent Beardsley, born August 21, 1872 and died March 16, 1898. He was an English illustrator and author who is famous for The Peacock Skirt, 1894. He also illustrated Oscar Wilde’s play Salomé which eventually premiered in Paris in 1896 (Bolger 15-35).

Aestheticism helped to reproduce and reshape Americans’ ideas about nature, religion, political economy, and gender in ways that were in keeping with an urban, industrial way of life. In art education, Aesthetic beliefs had initially been distributed by the South Kensington system of teaching drawing and design, brought to North America by Walter Smith. Over time, elements of both Aestheticism and the Arts and Crafts movement were combined in textbooks published by the Prang Educational Company in the late 19th century and early 20th century (Eisner 45-46). Aesthetics is the philosophical study of beauty and taste that has deeper meanings. Symbols represent something has a deeper meaning. Symbolism is a part of aestheticism; it can be viewed as a sublet category. Symbolism is an artistic and poetic movement that originated in the late 19th century France and Belgium.

This movement uses symbolic images and style to convey feelings of mystical emotions, ideas, and states of mind. Some important leaders of this movement included Mallarme, Maeterlinck, and Verlaine, to name a few (New Oxford American Dictionary). Symbolism can be considered a theory of aestheticism as well as a reaction against Naturalism and Realism. The Symbolism movement’s origination can be seen in Charles Baudelarie’s French poetry volumes of Les Fleurs du mal (The Flowers of Evil, 1857). Edgar Allan Poe was Baudelarie’s main influence and role model. Baudelarie also sourced many of Poe’s pictures and metaphorical expressions. Moving away from literature into symbolic art, the art was very distinct from literature in the movement.

Art symbolism represents a more grotesque, dark, and sometimes surprising or ironic side. Arnold Bocklin, was one of the many famous symbolist painters. He was a Swiss painter with influence from Caspar David Friedrich and that of Romanticism. His most notable paintings are his five versions of Isle of the Dead, 1880-1886. (Barlow 60-65). Walter Pater was a 19th century aesthete. Born in 1839, Pater grew up in Enfield. As a young adult he attended Brasenose College in Oxford. Arnold and Ruskin originally inspired him, but once attending this college Pater lost his Christian faith. In place of his Christian faith Pater had become a believer in aestheticism. He even became the “dominant spokesman for this movement, rebelling against the evangelical certainties of Ruskin’s early writings” (Hoare 1).

To this movement Pater contributed many different essays, poetry, and criticisms. The first of these to be printed was a brief essay on Coleridge, contributed in 1866 to the Westminster Review. This essay was about the humane aspects of Coleridge’s philosophical thought. Following this publication, in January 1867, his essay on Winckelmann came out. It was an exposition of “Goethe’s so called naturalism and a defense of the Hellenic or aesthetical view of life” (Greenslet 24). In the following year his study of ‘Aesthetic Poetry’ appeared in the Fortnightly Review, These, with other similar writings, were collected in his Studies in the History of the Renaissance in 1873. Pater also published various other essays such as Imaginary Portraits, Appreciations, with an Essay on Style, Plato and Platonism, and The Child in the House.

The years of 1881 to 1885 of Pater’s life, however, were dedicated to the production of his very own masterpiece, “Marius the Epicurean”. This piece, was his ultimate contribution to aesthetic literature, and was published early in 1885. In this piece of work, Pater displays ideals and principles of an aesthetic life in full detail. This publication was well received to people everywhere, and confirmed Pater’s position as a respected writer. Many of Pater’s writings later influenced another one of the Aesthetics leading proponents, Oscar Wilde, who also was a former student at Oxford (Greeslet 73-76). And, as mentioned earlier, with Wilde’s death would come the end of the aesthetic movement.

Aestheticism and the History of the Aesthetic Movement. (2021, Sep 14). Retrieved from https://studymoose.com/aestheticism-and-the-history-of-the-aesthetic-movement-essay 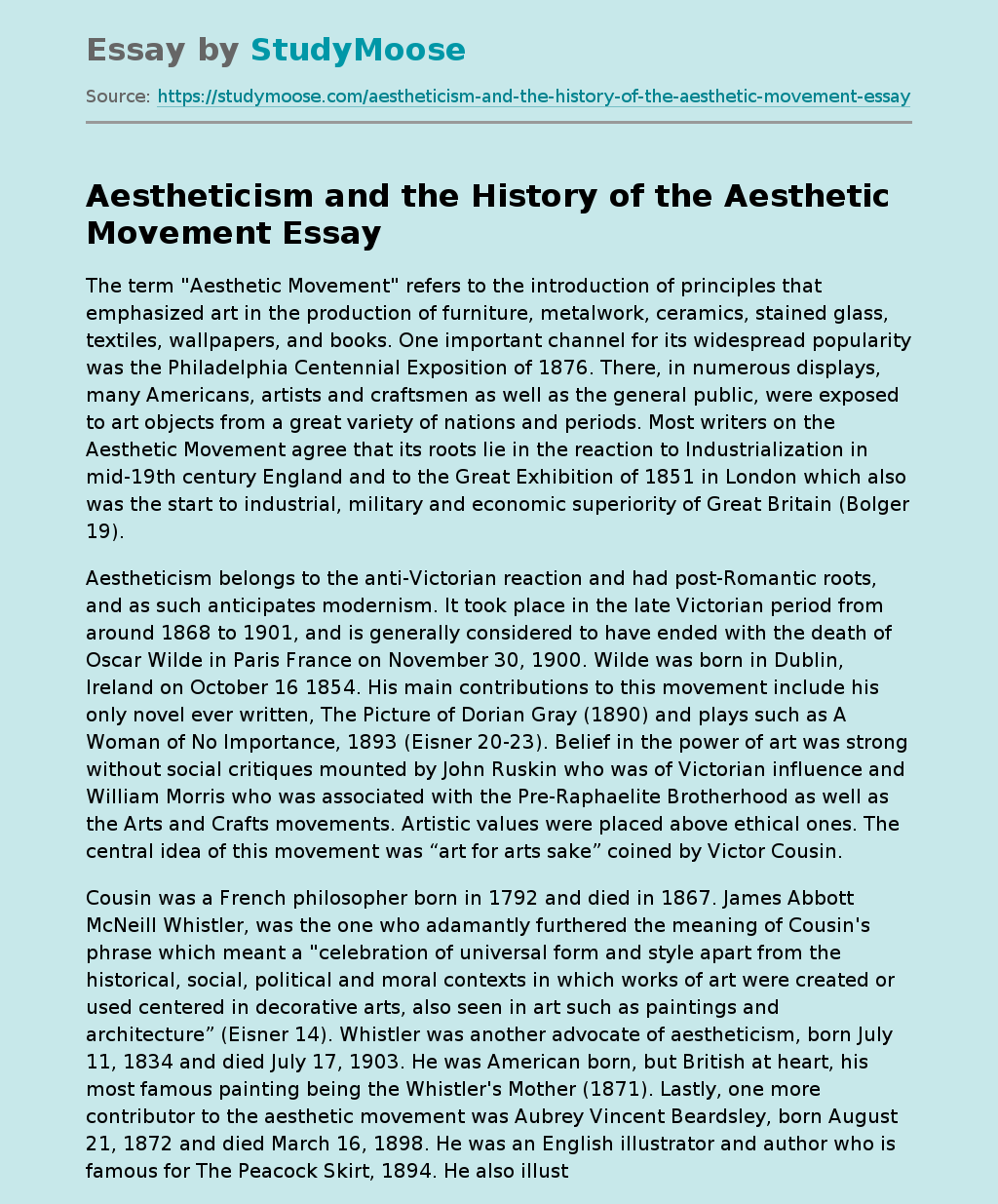