History of the Guidance Movement

Career counseling was first introduced in the early 1900 as vocational counseling it was used as a means to end poverty during the time when society was in uproar over a demising economy. “This new profession was described by historians as a “progressive social reform movement aimed at eradicating poverty and substandard living conditions spawned by the rapid industrialization and consequent migration of people to major urban centers at the turn of the 20th century (Whiteley, 1984, p. 2).” During this time the number of counselors was minimal and the counseling program was still in its developmental stages.

Don't use plagiarized sources. Get your custom essay on
“ History of the Guidance Movement ”
Get custom paper
NEW! smart matching with writer

Frank Parsons, who is known as the father of counseling was an advocate for the rights of the underprivileged who were being exploited by new industries. Parsons created the Bureau of Vocational Guidance and develop scientific process to help people choose careers. His theories were rooted in first improving working conditions, then focusing on the individual workers’ needs. He initiated the vocational guidance movement in the early 1900.

In 1905 he and his colleague Ralph Albertson founded the Breadwinner’s Institute in Boston. The institute offered courses to the working poor to help them attain skills to equip them for the new industry. Parson’s work on vocational guidance classified the fact identified the cause and drew the conclusions about several issues pertaining to suitability of people for different work environments.

The guidance movement emerged during the change in the American economy the vast decline of agricultural jobs is what set it in motion. Those who once thrived in this industry would now be over taken by the emergence of technology.

Increasing urbanization of the country, and the calls for services to meet this domestic migration pattern, all to retool the new industrial economy brought about by the industrial revolution. This caused a great migration to the United States which in turn called for vocational guidance. Although Frank Parson is credited as the father of the movement other like minded people including educators, economist, lawyers, ministers, psychologist and social workers would soon join the movement and were ready to advance the cause of vocational guidance as a means to effect social justice. These individual would advocate for the creation of governmental agencies to help regulate the economy. The main purpose of the guidance movement was to improve the lives of societies’ most vulnerable while showing respect to their rights as human beings providing them with the necessary skills and tools need to be productive within their communities. As a result children’s aid societies were created, juvenile courts put in place, labor laws enacted, educational reforms instituted and out of this the vocational guidance movement was born.

Parson successor Meyer Bloomfield was also instrumental in the guidance movement. He was determined to advance the cause by creating alliances with local and national professionals. Bloomfield help start the committee that would go on to plan the first National Conference on Vocational Guidance. The Conference was held in November of 1910. It was at this convention the idea to implement vocational counseling in schools would arise. During this time a large number of young people where leaving school to go to work without the necessary knowledge about the world of work As Bloomfield put it “young people are unguided, unprepared and uninformed (Brewer 1942).” These conferences would go on to be held annually and out of them would come the National Vocation Guidance Association which was created in 1913 (Brewer 1942). At this point everything was in place for the counseling profession to flourish. In the last 100 years since the initial start of the guidance movement much has been accomplished and yet much remains to be done. The guidance movement emerged out of a tumultuous era and today career development professionals are facing challenges that mirror those of the past. The work of the predecessors have helped equipped the new age professionals to better assist those who are still most vulnerable in society. Because of past contribution, we continue to stride and make remarkable millstones in the profession.

In the last 50 years career development has been revolutionized by creativity and innovation, brought by a number of professionals. Career guidance continues to evolve as society changes and as a result today’s career professional are better equipped to assist the clients they serve. Frank Parson clearly states in his own book the importance of guidance “ No step in life, unless it be the choice of a husband or wife, is more important that the choice of a vocation. This vital problem should be solved in a careful scientific way with due regard to each person’s aptitudes abilities ambitions resources and limitations, and the relations of these elements to the condition of success in different industries (page3).”

History of the Guidance Movement. (2016, Mar 10). Retrieved from https://studymoose.com/history-of-the-guidance-movement-essay 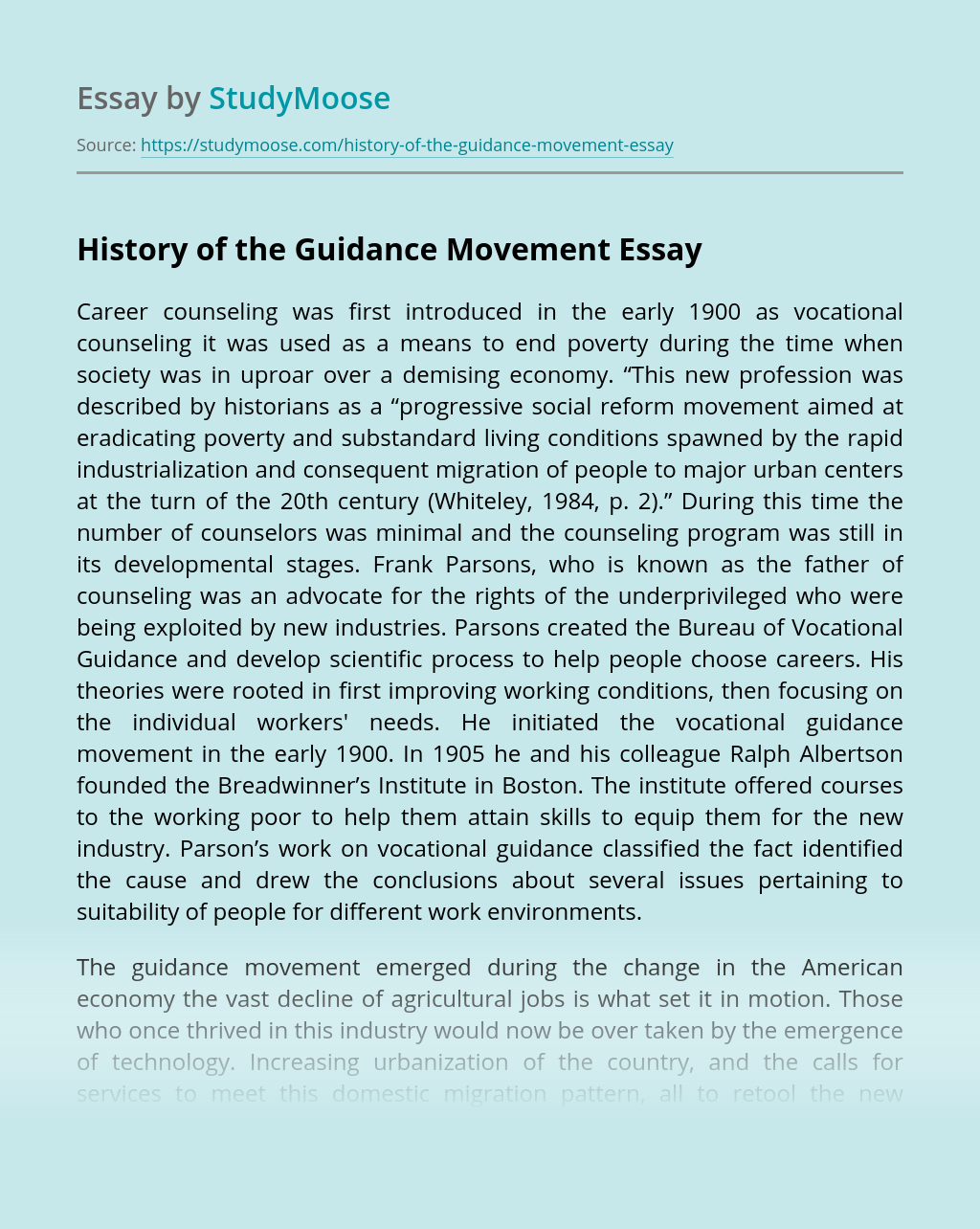