During these last decades, the world economy has experienced rapid growth. This growth has been fueled in part by the more rapid growth of international trade. Trade growth, in turn, results from both technological developments and concerted efforts to reduce barriers to trade. Some developing countries have opened their economies to take full advantage of opportunities for economic development through trade, but many are those who abstained. Trade barriers that persist in industrialized countries are concentrated on agricultural products and manufacturing intensive labor, for which developing countries have a comparative advantage.

Don't use plagiarized sources. Get your custom essay on
“ Advantages of trade liberalization ”
Get custom paper
NEW! smart matching with writer

The pursuit of trade liberalization, particularly in these areas, both industrialized and developing countries, help the poorest out of extreme poverty while also benefiting the industrialized countries themselves.

Policies that open economy to trade and investment around the world are essential to sustained economic growth. For several decades, no country experienced economic success, demonstrated by the substantial increase in living standards of its people, without being open to the rest of the world.

Proficient in: Productivity And Economic Growth

Conversely, opening to trade – as well as foreign direct investment – was an important element in the economic success of East Asia, where over the last 20 years the average import duties fell to a level of 30 % to 10 %.

China for example, remained closed in 2003 based on the undivided power of the Communist Party and its black market exchange rate premium, which averaged 36% between 1990-1999 (Easterly and Sewadeh, 2002). In addition, China had a relatively high average tariff rate, 31%, between 1990-1999. Today, we can admit that China is perhaps the best example of the positive connection between openness and economic growth.

Reforms in China transformed it from a highly protected market to perhaps the most open emerging market economy by the time it came into the World Trade Organization at the end of 2001 (1).

The opening of their economy to the world market is the key factor that has enabled many developing countries to develop comparative advantages in the manufacture of certain products. In these countries that the World Bank called “new globalists” the number of people living in absolute poverty has declined by more than 120 million people (14% ) between 1993 and 1998 (2).

There is a considerable number of facts showing that countries that are more open to the outside tend to consistently grow faster than those which are closed onto themselves (3). In fact, we can see that the benefits of trade liberalization can be more than ten times higher than its Cost. Countries that have opened their economies in recent years, including India, Vietnam and Uganda, have experienced faster growth and a more pronounced reduction of poverty (4). On average, those developing countries that have strongly reduced their tariffs in the 1980s have grown faster than other growth during the 1990s.

Trade liberalization often particularly benefits to poors. The increased growth resulting from trade liberalization tends to increase the incomes of the poors in general at the same proportions as those of the entire population (5). New jobs are created for unskilled workers, enabling them to enter the middle class. Generally, inequality between countries has been declining since 1990 , reflecting the fastest economic growth in developing countries, which is partly due to the trade liberalization. Trade liberalization reduces the cost of living. For example, in the EU Member States, services such as transport, energy, postal services and telecommunications have previously been provided by national organisations with exclusive rights to provide a given service. By opening up these markets to international competition, consumers can now choose from a number of alternative service providers and products.

Opening up these markets to competition has also allowed consumers to benefit from lower prices and new services which are usually more efficient and consumer-friendly than before. This helps to make the economy more competitive (6). The elimination of the remaining trade barriers is likely to provide significant gains. Gains from the removal of all barriers to merchandise trade are estimated between 250 and 680 billion dollars per year. Approximately two thirds of these gains accrue to industrialized countries. But the amount for developing countries would still be more than two times higher than the support they currently receive. Further trade liberalization would benefit more, as a percentage of their GDP, to developing countries than to industrialized countries because their economies are more strongly protected and they face higher barriers.

Although an improved access to the markets of other countries has advantages, liberalizing their own market is the most profitable to the countries. For industrialized countries, the main benefits come from the liberalization of agricultural markets. Developing countries benefit equally to liberalize their manufacturing and agriculture. 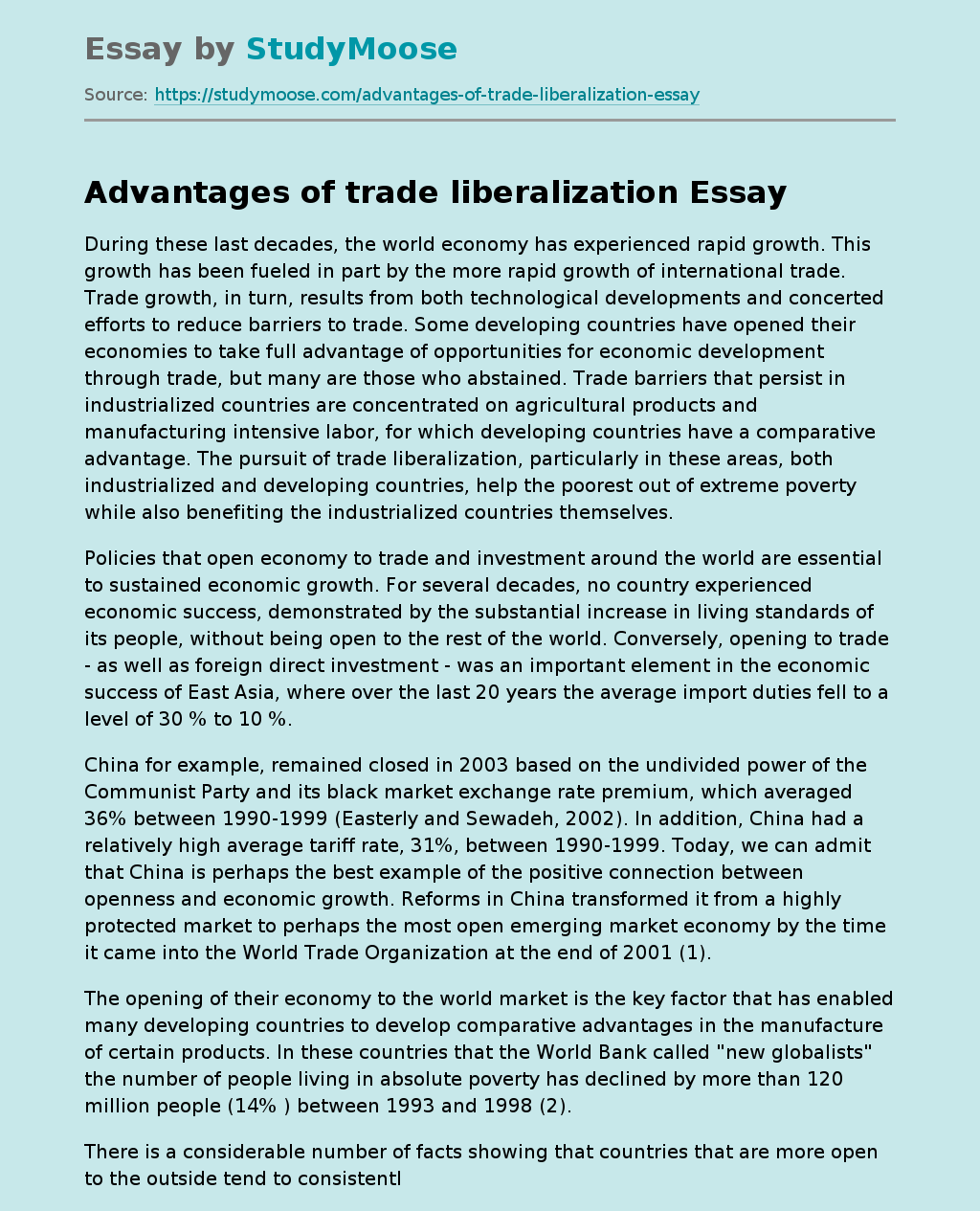