The Causes and Consequences of the Atlantic Slave Trade

The Atlantic slave trade was present between the seventieth and ninetieth century and mainly involved Africans being sold to European slave owners who shipped them over the Atlantic to America and the Caribbean, to work in plantations principally sugar, tobacco, coffee and cotton. The Atlantic slave trade affected more than twelve million African slaves and has left a huge imprint on today’s society.

There were several major causes for the Atlantic slave trade, such as high demand for cheap labour, the growing economies of the European colonial powers and the desire to make money.

Turn in your highest-quality paper
Get a qualified writer to help you with
“ The Causes and Consequences of the Atlantic Slave Trade ”
Get high-quality paper
NEW! AI matching with writer

The demand for cheap labour was tremendous and the European workers did not survive the conditions on the plantations. Labour was needed to harvest crops to provide raw materials for products in Europe.

The economy of Europe was rapidly growing and going through a commercial and industrial revolution, and needed natural resources to ship to Europe. In this economic climate there was a lot of money to be made.

Greed was a major factor towards the Atlantic Slave trade. Plantation owners and merchants profited and contributed significantly to the economic growth. Slave traders became very rich from exploiting African slaves and thriving of other people’s misery.

The Atlantic Slave trade also had a lot of consequences including the effect on the African slaves, the European economy and the profit made by the slave traders.

The slave trade hugely impacted the Africans because they suffered, worked in appalling conditions and were treated inhumanly. Somewhere in the region of eight to twelve million slaves died, because of this it also greatly affected the development and population of Africa.

The European economy also was affected by the Atlantic slave trade as it grew vastly and was successful from the Europeans point of view. Luxury products such as sugar, tobacco, coffee and cotton were in high demand and use of slaves helped enabled them to obtain these products. Cities such as Liverpool, Amsterdam and Bristol became rich.

The final consequence was that the slave trade also led to a protest movement against slavery. A few individuals believed that slavery was inhumane and barbaric, and wanted abolish slavery. An example of this was William Wilberforce, an English politician and philanthropist. Slavery was eventually abolished in the ninetieth century but has still left a huge impact on today’s society.

The Causes and Consequences of the Atlantic Slave Trade. (2016, Sep 11). Retrieved from https://studymoose.com/the-causes-and-consequences-of-the-atlantic-slave-trade-essay 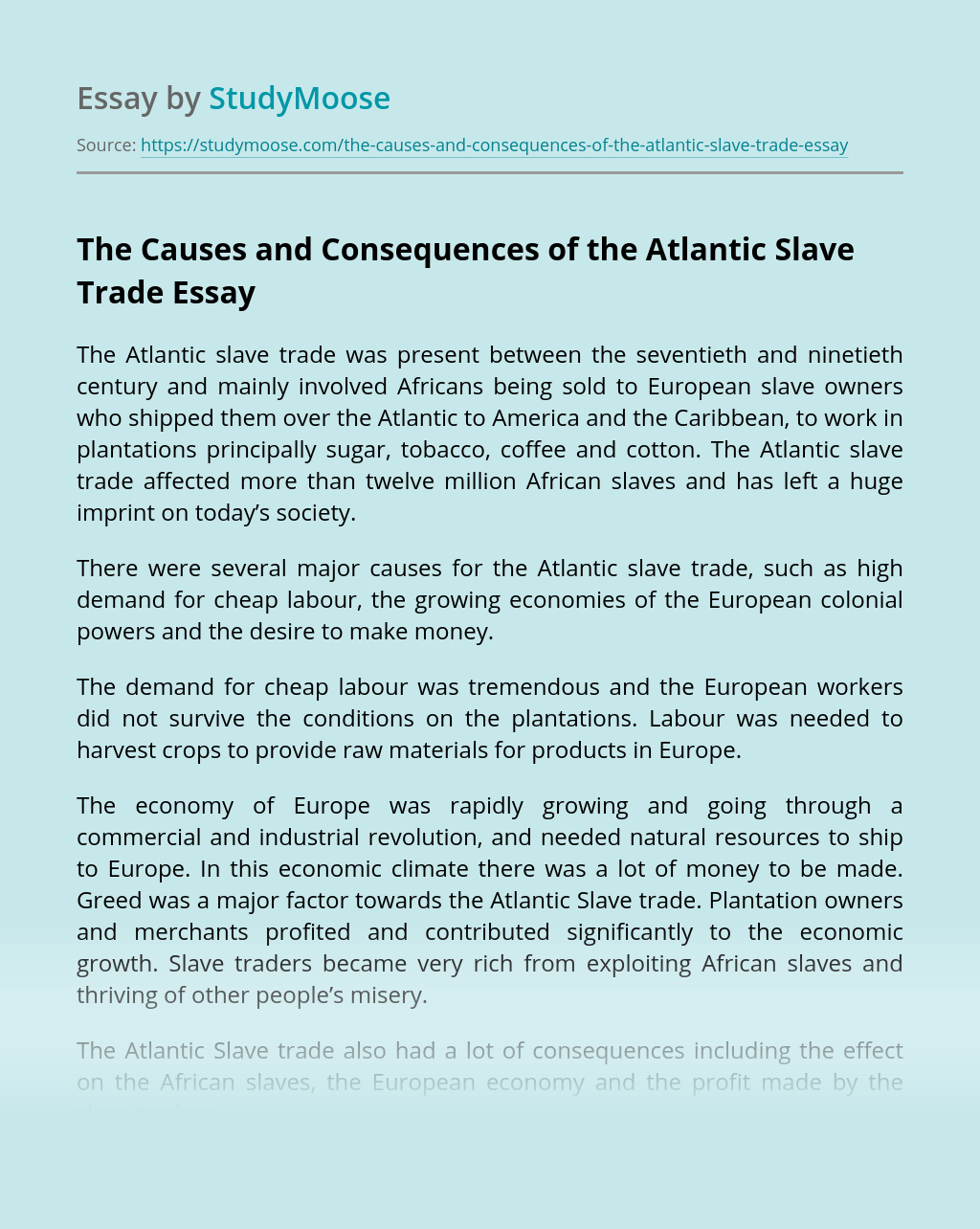 Turn in your highest-quality paper
Get a qualified writer to help you with
“ The Causes and Consequences of the Atlantic Slave Trade ”
Get high-quality paper
Helping students since 2015
Stay Safe, Stay Original