The Atlantic Slave Trade in Africa was one of the most widespread forms of slave trade in the continent of Africa.

Don't use plagiarized sources. Get your custom essay on
“ The Atlantic Slave Trade ”
Get custom paper
NEW! smart matching with writer

As such, it had major implications on both the social, political and economic lives of the West Africans. Patrick Manning, in his article contours of slave trade and social change in Africa, suggests that treatment of the Atlantic slave trade follow on two approaches; the emergent Africa and the Afrique Engagee. Whichever approach, it has an implication on the understanding of the impacts of the Atlantic slave trade as well as its Abolition in the continent of Africa. The Emergent Africa approach postulates that there is a school of thought that holds that the history of Africa is controlled from within. The Afrique Engagee approach postulates that the history of Africa was externally dominated.

To put matters into perspective, this paper will consider the Afrique Engagee approach and analyze the implications that this approach has on the impact of the Atlantic Trade and the eventual; abolition in Africa.

CITATION Man83 l 1033 (Manning, 1983)The Trans-Atlantic Slave trade had a huge effect on the economy of Western European countries. As a matter of fact, Britain gained tremendously from this trade. The profits that were made by Britain were enough to steer up the industrial revolution in Britain in the 17th century. As a result, Britain , and other countries like her had all t gain and little or nothing to lose at the end of the day. The profits that were made by Britain were too much to the extent that Britain was in the favor of the abolition of the trade in the year 1833.

CITATION Ell07 l 1033 (Frost, 2007)Britain was able to benefit hugely until the UK parliament came up with a bill that would fuel the abolition of slave trade in Africa. Britain, together with the United States, declared the abolition of slave trade as one of the major reforms that they were zealous to see that it came to pass. To date, it has not been established why the British government decided to take this move. It was probably for economic reasons, since the abolition came at a time when that was a great economic decline in the British Caribbean islands. On the other hand, it could be due to the awareness of the non-humanitarian nature of the trade. Whichever way, Britain still abolished the trade and this meant a great deal. The fact that other countries outside the continent of Africa gained a lot from this trade that was in no way lucrative should mean a lot. The fact that other countries played a role in determining whether the trade had to be abolished means even much more. This is when the Afrique Engagee approach makes a lot of sense. These occurrences simply describe the impacts of the Atlantic trade as well as its abolition was influenced by external powers to a very large extent.

CITATION Reb14 l 1033 (Shumway, 2014)The Atlantic trade had a great demographic effect both within and without the continent. In Africa, there was a very big demographic disaster that was created. To the other parts of the world, there was a positive increase in population. The depopulation of the African continent had a negative implication on the lives of many Africans. The massive decrease in population simply implied that there was a shortage in terms of labor. Labor is a main factor input in the process of production. As result, the absence of labor or rather the insufficient labor situation that was experienced in Africa meant that the poor economic situation in the continent worsened even further. As a result, the other external forces only led to a deprivation of labor of the African continent. On the other hand, the slaves were used as laborers at their places of destination. They were overworked with little or no wages. The implication of this is that the external forces gained at the expense of the loss by the African countries. The external forces in the Atlantic trade indeed affected the impact of the trade to a very large extent.

CITATION Jam05 l 1033 (James A. Rawley, 2005)The effect on labor was not the only population or demographic effect of the Atlantic slave trade. It is important to note that the European countries had a say over the kind of slaves they wanted. As a result, it was noted that the European countries chose the able bodied and well-built men as the preferred candidates for the trade. This had a great social impact on the lives of Africans. It created intense social changes. The women had to take up the roles that were earlier played by the men. As a result of the absence of men there was a switch in the roles of children as well. They had to take up the roles that were previously played by the women. The fact that the European countries had a say on the specifications of the slaves they wanted was the result of this social change. This basically means that the social change of reversal of roles was brought about by external forces.

CITATION Ell07 l 1033 (Frost, 2007)From this analysis, it can be clearly seen that the course of the Atlantic slave trade, the implications it had on both Africa and the entire world as well as the eventual abolition of the trade in Africa, were greatly determined by external forces. These forces mostly included the non-African countries and organization. The Afrique Engagee approach thereby is a very effective approach in the analysis of the Atlantic trade. This approach, as put forward by Patrick Manning is a very successful approach in examining the effect of the external forces on the impact of the Atlantic slave trade as well as its abolition. As a matter of fact, we see a couple of events in Africa, taking the same course of events. That is, a lot of African issues are still tackled by external forces even after the countries acquired their independence. For instance, the International Criminal Court still handles most African criminal cases. African countries have not come up with their own ways of handling the issues that face them. This is what is referred to as Neo-colonialism. 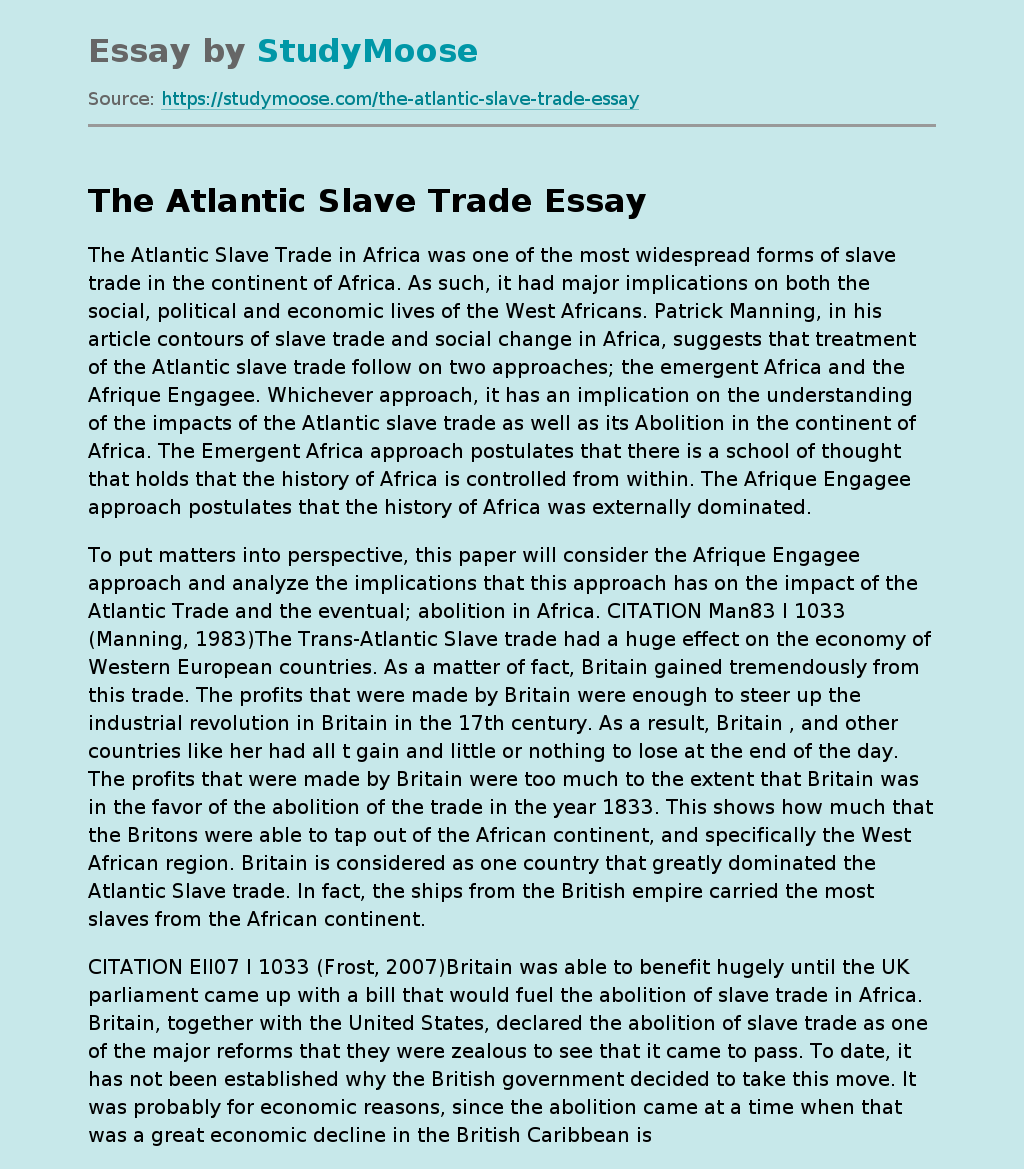