Advandtage and Disadvantage of International Trade and Commerce

Don't use plagiarized sources. Get your custom essay on
“ Advandtage and Disadvantage of International Trade and Commerce ”
Get custom paper
NEW! smart matching with writer

For example, a country which lacks of timbers, its citizens would unable to produce furniture or related products.

By involving itself in international trade, its citizens can get timber to produce. In return, the country pays the foreign suppliers money as a medium of exchange.

The first advantage is absolute advantage and comparative advantage can help a country to increase its outputs through specialization. As a result it will increase the total world production. Absolute advantage occurs when one country can produce more of one product compared to other country with using the same of resources.

Comparative advantage states that countries can benefit through specialization and trade the production with each other to lower the opportunity cost. For example, Malaysia and Indonesia are the countries which export timbers and rubbers. However, Malaysia’s land area is smaller and limited.

Thus, Indonesia gains absolute advantage to specialize in exporting timbers because it has large land area to replant after cut down the trees. Conversely, Malaysia is famous with its good quality of latex and rubber products. Thus, Malaysia should more focus in exporting rubbers than timbers. Malaysia gains absolute advantage to specialize in producing latex and exporting rubbers. On the other hand, Malaysia and Indonesia can gain comparative advantage through trading with each other. For example, Malaysia exports rubber to Indonesia, as return Indonesia will export timbers to Malaysia. When countries can produce through comparative advantage, it helps to reduce duplication and waste materials

The second advantage is increase in consumption power. A country’s nation who involves in international trade is usually has good income. It is because they know to export their products to other countries to earn more money. Thus, they can generate higher incomes and able to afford in demand imported goods. Those people who rich may demand imported goods to improve their standard of living. It is because imported goods are usually having better quality, design and features. It has not only improved people’s standard of living but also economic growth within a country.

The third advantage is reduction in unemployed resources. If a small firm needs to increase production for export purposes, it must intensify productivity and enlarge the firm. Firms should have four factors of production from the households, which is capital, entrepreneur, labor, and land. To enlarge the firm, entrepreneurs need to buy or rent a bigger size land, increase number of machines, and employs more labors to launch the business. It also helps other firms to get business opportunities like transportation and suppliers.

For examples, firms need to pay transportation fee for shipping or airline, and buy materials from the suppliers. On the other hand, it also provides job opportunities for local citizens like work as technician, engineer, staff, cleaner, lorry driver and others. As a result, there will form a positive circular flow between firms and households. Households provide factors of production to firms, whereas firms will pay factor incomes for exchange. Eventually, it helps to increase a country’s national income.

International trade helps in improving local product quality. Goods that produced for export purposes are usually have better quality, attractive design, pricing, variety choices and features in order to be competitive. Firms which want to be more competitive and gain more market share, they must be innovative and keep improving their products. In Malaysia, two local car manufacturers which are Proton and Perodua tend to be more competitive to save their firms. In order to withstand importers’ car like Toyota, Nissan, Mercedes-Benz and BMW, they change their pricing strategy and try to improve their cars’ quality. For example, Proton and Perodua have promoted their new MPV cars, which are Exora and Alza at a cheaper price compared to imported cars.

The fifth advantage is producer’s market size will increase through the international trade. Malaysia’ market size is small compared to ASEAN and European countries. Some producers not only sell their products in local, but also sell to overseas in the international trading. As a business man’s thought is concentrate how to increase his profitability. Thus, smart entrepreneurs will keep finding other markets to enter rather stay at local market. This will allow them to enjoy more profits by exporting their products to overseas.

The sixth advantage is producer can achieve the economics of scale. Local market is small, thus the output for local is less due to the low demand. Producers are not profitable then they move their targets on foreign markets by expanding their business. In addition, the producers can achieve the economics of scale with producing large amount of goods. It is because producer buys materials from supplier at large quantities and they enjoy the discount. This allows the producers reduce their cost of production and increase the output massively.

The seventh advantage is political alliances and allegiance. International trade encourages the development of trading links between countries to closer political links. Countries that involve in trading internationally with each other will form a closer political relation within each other. For example, Malaysia has a trading and political links with some countries like US, China, Japan, England and Korea. Political alliances make the relationship between each other getting closer and clearer.

In addition, political alliance is very important for a country against being invaded the territories by other country. Therefore, many countries having international trading link with each other and form a stable political alliance. An alliance country usually will be protected against enemies. During the emergencies occur, alliance countries could be received emergency help easily. For example, during the World-War Two US was helped Malaysia in military against Japan armies. Import and export activities bring some disadvantages to the country.

The first disadvantage is available of undesirable goods and services. If a country trades with another country based on free international trade, which mean all the goods and services will be available. If there is a demand, there will be a supply if the price is good. Even illegal items will be available in the free international trade countries. Thus, the country will be freely trade whatever they prefer such as weapons, drugs, and pornography. Hence, it will socially harmful to a country like increasing in crimes rates.

The second disadvantage is preference of producer to export rather than sell in local. Different markets have different price, price of the product is based on the demand power in the country. Normally, price discrimination encourages the producers to sell more in the markets which provide higher profits. If the level of demand of the product is high in that country, in turn the price of that product will increase. If the product can sell at higher price in Japan, the producers will enjoy more profits and produces it more to be exported to Japan. Hence, the producer will less concentrate on local market and move their target to Japan’s market.

The third disadvantage of international will influence the local firms and producer. Although it is truth state that international trade will make a firm became more competitive and innovative. However, some firms still will be affected and eventually will close down their business. For example, imported textiles from China are very cheap compared to local made due to the cheap labor cost and materials cost. Thus, some entrepreneurs will unable to cope with the environment, which less of innovative thinking and lack of experiences will lead to business failure. Furthermore, some producers will decide to quit the market and end the business. It is because of their thoughts which cannot compete with those cheaper cost productions of producer.

The fourth disadvantage is outflow of capital and domestic currency. Import activities increase the outflow of domestic currency in order to pay for the imported goods. If a country imports ratio higher than exports ratio will cause the devaluation of domestic currency. For example, when we demand US products, we must offer our Ringgit Malaysia to buy US dollar for the payment. On the other hand, a foreign partnership person will transfer their capital in the form of portfolio investment will cause outflows of interest and dividend. Therefore, some governments have restriction on foreign ownership of its specific industries such as utilities, transportation and communications. This helps to avoid foreign investors to have ownership of a country’s wealth and capital outflows.

The fifth advantage is increasing the producer’s market size. The sixth and seventh advantages are achievement economic of scale and political alliances. However, international trade will bring some impacts within a country which cannot be denied. For example, a country would receive undesirable goods and services that socially affect its citizens. The second disadvantage is preference of producer to export rather and dislike sell in local due to the profitability factor. The third is local firms and producers will be affected by importing foreign goods. The last disadvantage is a country’s capital and currency will outflow.

Advandtage and Disadvantage of International Trade and Commerce. (2016, Oct 04). Retrieved from http://studymoose.com/advandtage-and-disadvantage-of-international-trade-and-commerce-essay 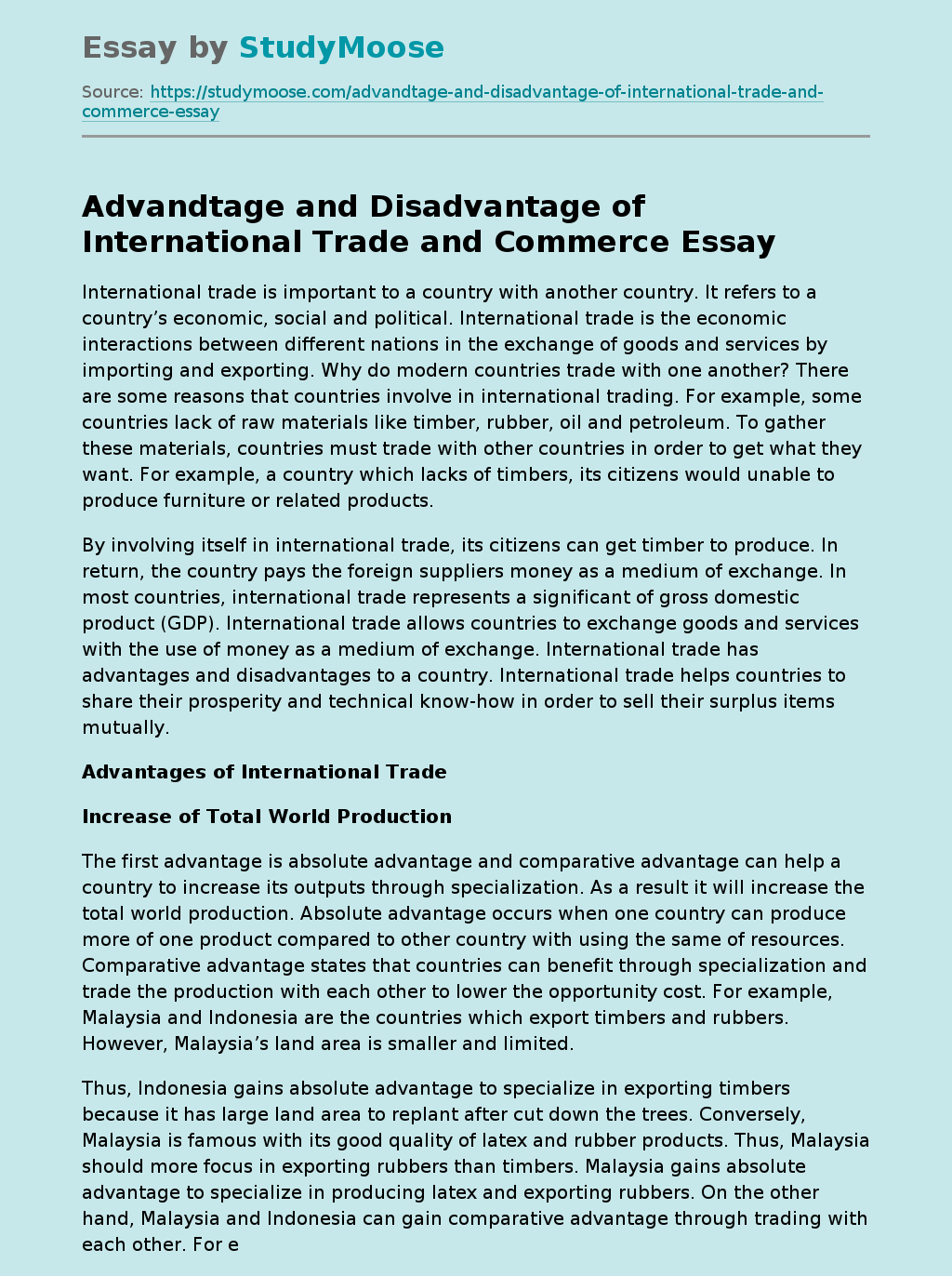