It is appropriate for me to seize this opportunity to speak a couple of words on the need to expand Technical Education in the country. In Sri Lanka, technical education began in the 1890s with the establishment of the Colombo Technical College, which, as Government Department, functioned to cater to certain requirements of such Government Departments as Public Works, Railways and Irrigation. Technical Education, because of this limited focus, did not expand in the colonial period; it was after independence an attempt was made to start engineering courses.

Don't use plagiarized sources. Get your custom essay on
“ Advantages of Technical Education ”
Get custom paper
NEW! smart matching with writer

With the establishment of the University of Ceylon, an Engineering Degree course was started. In the sixties, a network of Technical Colleges came into existence but they taught only trade and craft courses. What the country needed was an Institute which could career to the middle level needs in the field of technical knowledge. Such middle level technical know-how was necessary for the country to undertake development; industry was expanding and new development corporations came into being, and such institutions, in addition to engineers, wanted middle level technical expertise.

Since there was no organization to produce such men, the Government of the day wanted us to examine the possibility of setting up a Technological Institute which is capable of producing middle level technicians in areas relevant to development. Ampara Hardy Institute, German Technical Institute and the HNDE courses have become popular, and they produced employable technicians who found employment. It was in this background that we established the Sri Lanka Institute of Advanced Technological Education (SLIATE) which is now emerging as a centre of excellence in the area of Technological Studies in the country, and its provincial centres have become attractive centres of learning.

All students, who pass the Advanced Level examination cannot enter the Universities, and they need to be given opportunities in the field of higher education. This Institute has 18 branches throughout the country which could provide educational opportunities to a large group of students; today this kind of qualification could be easily marketed in a highly competitive world and the middle level technician is as important as a qualified engineer.

The Government, based on the Mahinda Chintana strategy on higher education, proposes to develop the SLIATE into a centre of excellence, and we are receiving substantial foreign assistance for the improvement of the Institute. In my view, Sri Lankan higher education institutions need foreign assistance and partnerships to meet the international competition in the Higher Education market. Today the world has become globalized, and in such a context, whatever changes we make, we need to look from the point of view of global considerations.

The multiple demands of economic and social development, specially in the context of Sri Lanka, needs diverse tertiary institutions, and the SLIATE, with its network of colleges specializing in technical subjects, can provide the State with middle level technically trained personnel. The very existence of the SLIATE shows that the country needs an education system with increased differentiation; in other words, the development of non-university institutions like higher technological colleges can help meet the growing social demand for higher education.

Those students, who fail to find places within the formal University system, need to be provided with opportunities in the technical education sector, and it is through such diversification of higher educational institutions that access to tertiary education can be improved; today nearly 210,000 students sit the Advanced Level examination, out of which nearly 120,000 students qualify to enter the Universities but the annual intake to Universities is restricted to less than 20,000. This is a major problem in the system, and this question has to be immediately addressed. The Government has adopted two strategies; one is to get a sizable section into the Technical education sector, and the rest has been given an opportunity to make use of the Distance Mode.

I would like to refer to the expansion of the Open University and the effective use of the external degrees formula. It is through enrollment in non-university institutions that the problems relating to access could be solved. For instance, in East Asia, the average annual growth of University enrollment was 11 percent between 1975 and 1980 and 6 percent between 1980-1988, as compared with 24 and 10 percent for non-University institutions in the same period. Several types of non-University institutions, similar to the SLIATE, have evolved in various countries to expand higher educational opportunities for those who aspire to get into the system. For example, Poly- Technics, Professional and Technical Institutes, Community Colleges and Institutions offering Distance Education.

In the Sri Lankan context, we cannot totally depend on the traditional system of University education. It has served a good purpose, and it is still serving a purpose; in my view, the immediate need is to diversify the tertiary education system with an emphasis on technical and vocational education. In terms of cost, they are low cost programmes and the country can afford such a network of colleges which could provide them with a qualification and training, with which a person can find employment.

The emphasis on scholastic education, which began with the establishment of the University College in 1921, needs to be transformed, and the young men and women, who now seek a qualification to get employment, should be encouraged to get a Technical qualification from an Institute like the SLIATE. It is the policy of the Government is to develop the SLIATE into a centre of excellence, it is not a mere Technical College, it is a special kind of Technological Institute, the products of which can make a vital contribution to the process of economic and social development.

Technical education, like University education, should become an integral aspect of the development process in the country. Only an Institute of this nature, with varied products of highly skilled labour, which can respond to labour market demands in a country. The reason is that such an Institute can operate multi-disciplinary programmes in various technical fields and the SLIATE is doing exactly that.

What needs to be done is to produce all types of skilled labour which a market economy needs; in other words, what the industry needs has to be produced. In Singapore, the employment prospects for graduates of Polytechnics are so good that many talented students seek entry into the vocationally-oriented Polytechnics rather than regular academic programme conducted by the Universities. In my view, the development of the SLIATE is certain to create a similar intellectual culture in the country.

Let me make use of this opportunity to speak a couple of words on the role of the teacher. I was a University teacher for more than thirty years. I want all these young men and women to be good teachers, dedicated to the function of teaching. One has to be a dedicated teacher who set an example to the student community; you must be able to command respect among the student community, for which you need an intellectual personality. 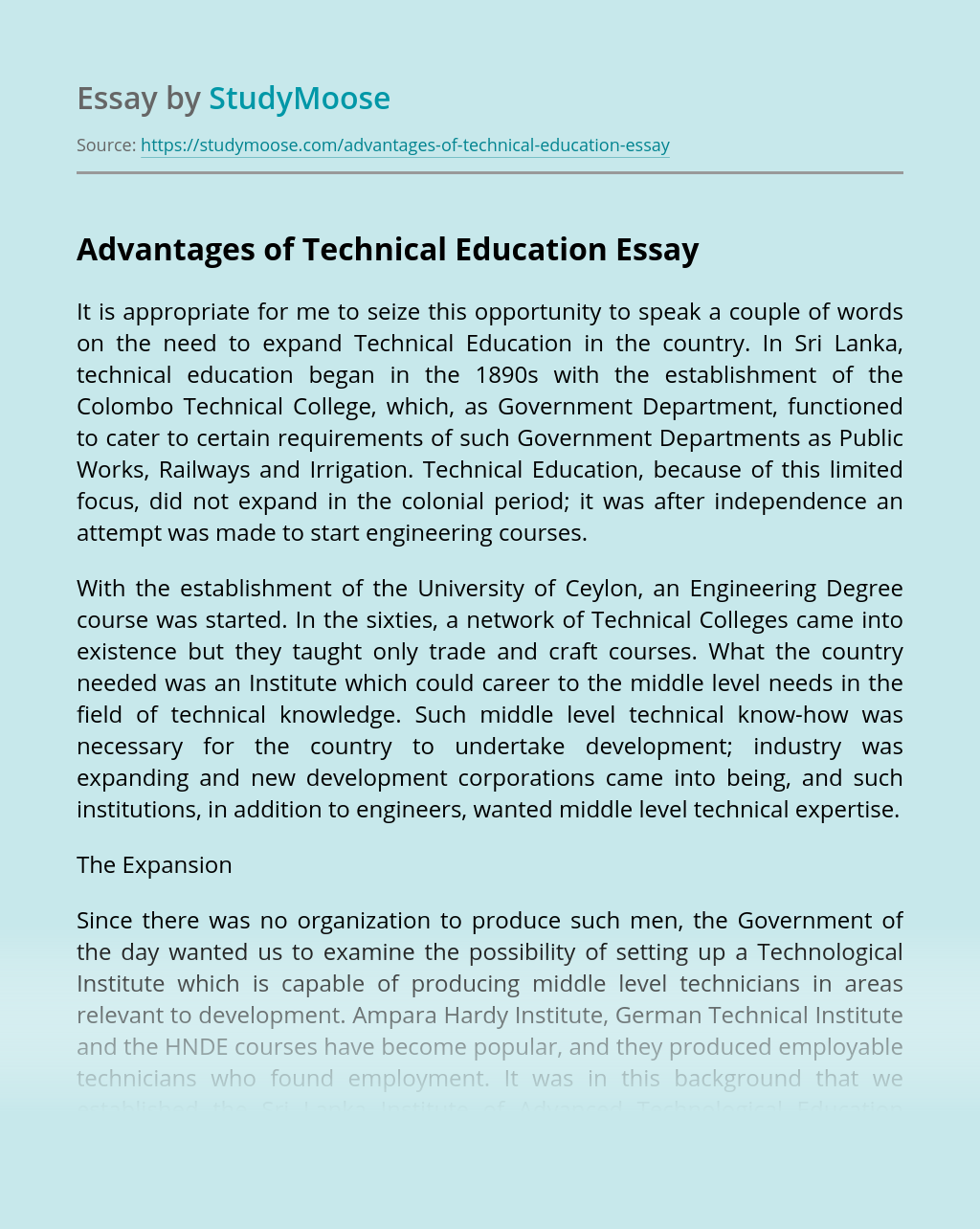