Advantages and Disadvantages of the Doctrine of Precedent

Discuss the advantages and disadvantages of the doctrine of precedent and how judges may make new law.

Don't use plagiarized sources. Get your custom essay on
“ Advantages and Disadvantages of the Doctrine of Precedent ”
Get custom paper
NEW! smart matching with writer

Include 1 case where judges have made new law. The doctrine of precedent is an important feature of judge-made law (common law). This doctrine means that similar disputes should be decided by reference to the same legal principles, and that lower courts are bound to follow the decisions of higher courts within the same court hierarchy. There are both advantages and disadvantages of the doctrine of precedent and the way in which judges may make new law. An advantage of judge made law is that decisions are based on principle – meaning that judges are not making up the law as they go.

The doctrine of precedent provides for consistency in the application of the law, which therefore promotes justice and fairness (as the courts will decide ‘like’ cases in the same way). There is also some degree of certainty, as the outcome of cases can be predicted based on previous decisions.

The advantage of precedent is that it allows for the law to grow to meet new situations, and to be flexible to meet changing needs – which therefore provides for the efficient operation of the legal system.

On the other hand, judge-made law is slow to evolve. The courts are not free to make law in the same sense as parliament. Unlike parliament, judges cannot make law as an immediate response to a community demand or when a general need is perceived. A disadvantage of precedent is that rigidity and inflexibility may develop where judges are reluctant to depart out-of-date or inappropriate precedents.

Uncertainty can also arise where there is more than one precedent that may apply to a particular set of circumstances. Change may be slow and irregular because change can only occur when a complainant has a significant case that is subject to an appeal. Given the cost of litigation, not all complainants may be prepared to persist with a legal action under these circumstances. Also, the law develops retrospectively meaning that a problem must exist before the court will consider the circumstances – it does not operate to avoid possible conflicts.

Landmark decisions (from which new principles develop) are few and far between. They usually arise from cases on appeal heard in the highest courts. An example of an Australian case where judges have made new law is Grant v. Australian Knitting Mills [1936] AC 85. This case involved similar circumstances to the landmark case of Donoghue v Stevenson, [1932] AC 562. In this case the plaintiff, Dr. Grant, bought some woollen underwear from a store. The underwear had been manufactured by the Australian Knitting Mills Ltd. Dr. Grant suffered dermatitis as a result of wearing the woollen underwear. It was later discovered that the condition was caused by the excessive use of chemicals in the process used to make the underwear.

According to the doctrine of precedent, the court would have applied the rule of law stated in Donoghue v. Stevenson to the case of Grant v. Australian Knitting Mills. Like Mrs. Donoghue, Dr. Grant was deemed to be a ‘neighbour’. He was a person who was closely and directly affected by the act of the manufacturer and the manufacturer ought to have had him in mind as being affected when preparing the underwear. The manufacturer had a duty to take reasonable care to avoid acts that they could reasonably foresee would be likely to injure consumers such as Dr. Grant. Dr. Grant was successful in his claim for damages. This was the first Australian case to adopt the legal principle of negligence. In summary, judges make laws by comparing similar situations and following sets of principles to determine outcomes. This is known as the doctrine of precedent and it creates common law – which has both advantages and disadvantages.

Advantages and Disadvantages of the Doctrine of Precedent. (2016, Apr 18). Retrieved from https://studymoose.com/advantages-and-disadvantages-of-the-doctrine-of-precedent-essay 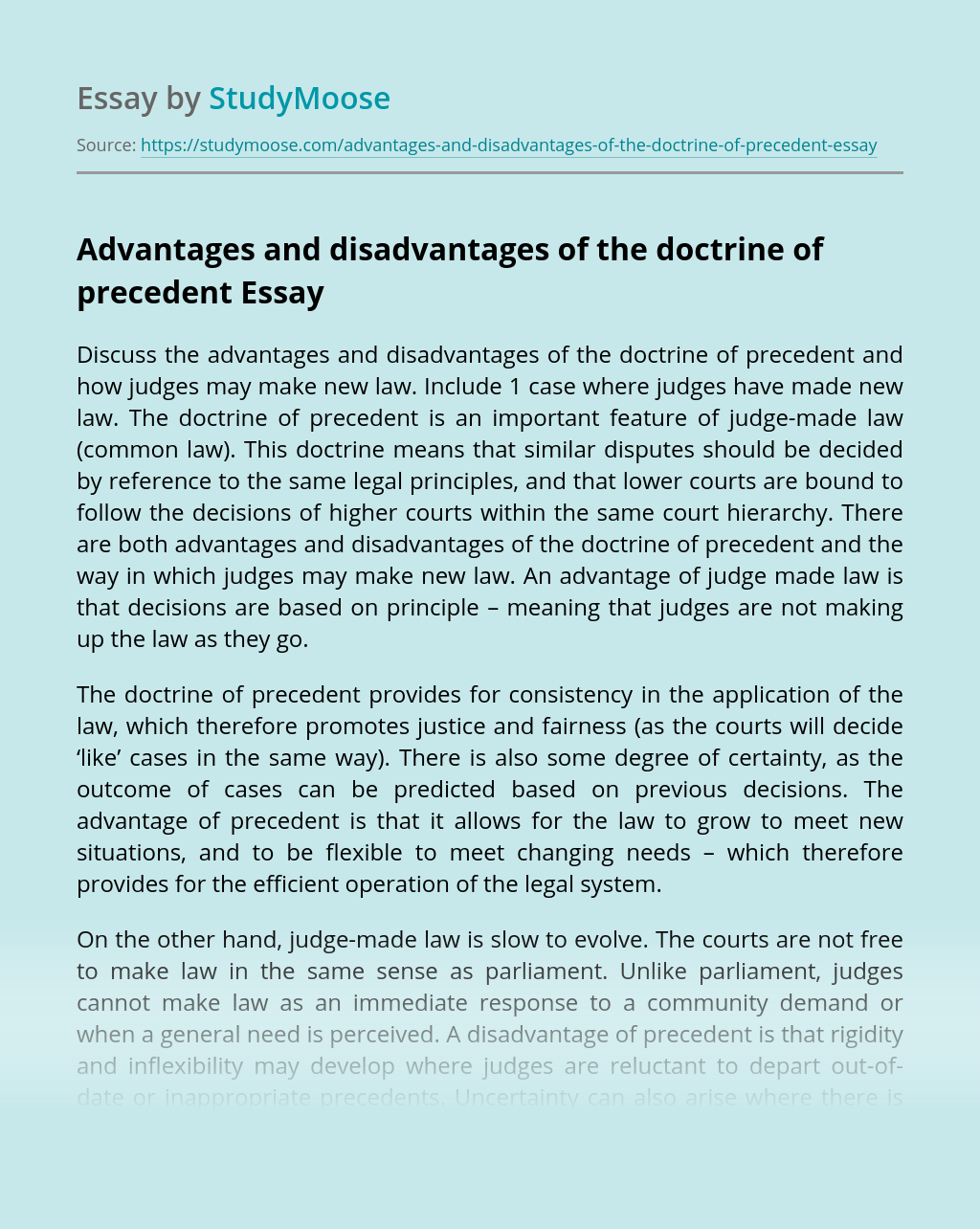