Congress enacted the Organic Act which authorized John Adams to appoint forty-two justices of the peace for the District of Colombia. In the confusion of the Adams administration’s last days in office, Marshall (then Secretary of State), failed to deliver some of these commissions. When the new administration came into office, James Madison, the new Secretary of State, acting under orders from Jefferson, refused to deliver at least five of the commissions.

William Marbury and three others were denied their commissions and therefore went directly to the Supreme Court and asked it to issue a writ of mandamus.

Marbury thought he could take his case directly to the court because section 13 of the 1789 Judiciary Act gave the Court the power to issue writs of mandamus to anyone holding federal office. Issues:

Yes. The law grants Marbury a remedy.The very essence of civil liberty certainly consists in the right of every individual to claim the protection of the laws whenever he receives an injury.

One of the first duties of government is to afford that protection. Where a specific duty is assigned by law, and individual rights depend upon the performance of that duty, the individual who considers himself injured has a right to resort to the law for a remedy. The President, by signing the commission, appointed Marbury a justice of the peace in the District of Columbia. The seal of the United States, affixed thereto by the Secretary of State, is conclusive testimony of the verity of the signature, and of the completion of the appointment. Having this legal right to the office, he has a consequent right to the commission, a refusal to deliver which is a plain violation of that right for which the laws of the country afford him a remedy.

Yes. The Supreme Court has the authority to review acts of Congress and determine whether they are unconstitutional and therefore void. It is emphatically the duty of the Judicial Department to say what the law is. Those who apply the rule to particular cases must, of necessity, expound and interpret the rule. If two laws conflict with each other, the Court must decide on the operation of each. If courts are to regard the Constitution, and the Constitution is superior to any ordinary act of the legislature, the Constitution, and not such ordinary act, must govern the case to which they both apply.

Marbury V. Madison Discussion Questions
Curtis Schulz
1. Judicial review is simply the established system under which the other legislative and executive branches actions are scrutinized and reviewed as to the constitutionality of their doings. The idea of judicial review established the cornerstone of the system of checks and balances. 2. Without this discrete power our government would be a hierarchy of power. Much like the founding fathers were afraid of it becoming at the time, like King George III’s British Empire.

In essence, it would give the ability to the executive and legislative branches to perform their dutiful tasks of making laws, negotiating treaties, and declaring war without the check to even make sure it falls in line with the foundation with which was established by the Constitution. Without it, our government would simply be a bust and furthermore return to what it was much like under the Articles of Confederation.

Only with unprecedented power given to the national government as opposed to the state governments. 3. Individual freedoms could be somewhat sustained as to what was presented by the Bill of Rights. The only catch is that no one would be able to review the fact of whether or not said passed law violates the Bill of Rights.

The idea of limited government would be completely nonexistent, and as stated earlier would represent the British Empire. 4. Although not granted directly by the Constitution, Justice Marshall clearly understood the imperative decision and its everlasting effect he had to make. To view a government without the established policy of judicial review, Marshall comprehended quite well what it would look like. Because of this Justice Marshall reasoned that something is needed to keep in check the other two branches of government along with the Constitution. Therefore he idealized that if one law conflicts with the Constitution or two laws are conflicting, the Supreme Court has the ultimate decision as to uphold or strike down the law, thus establishing judicial review. 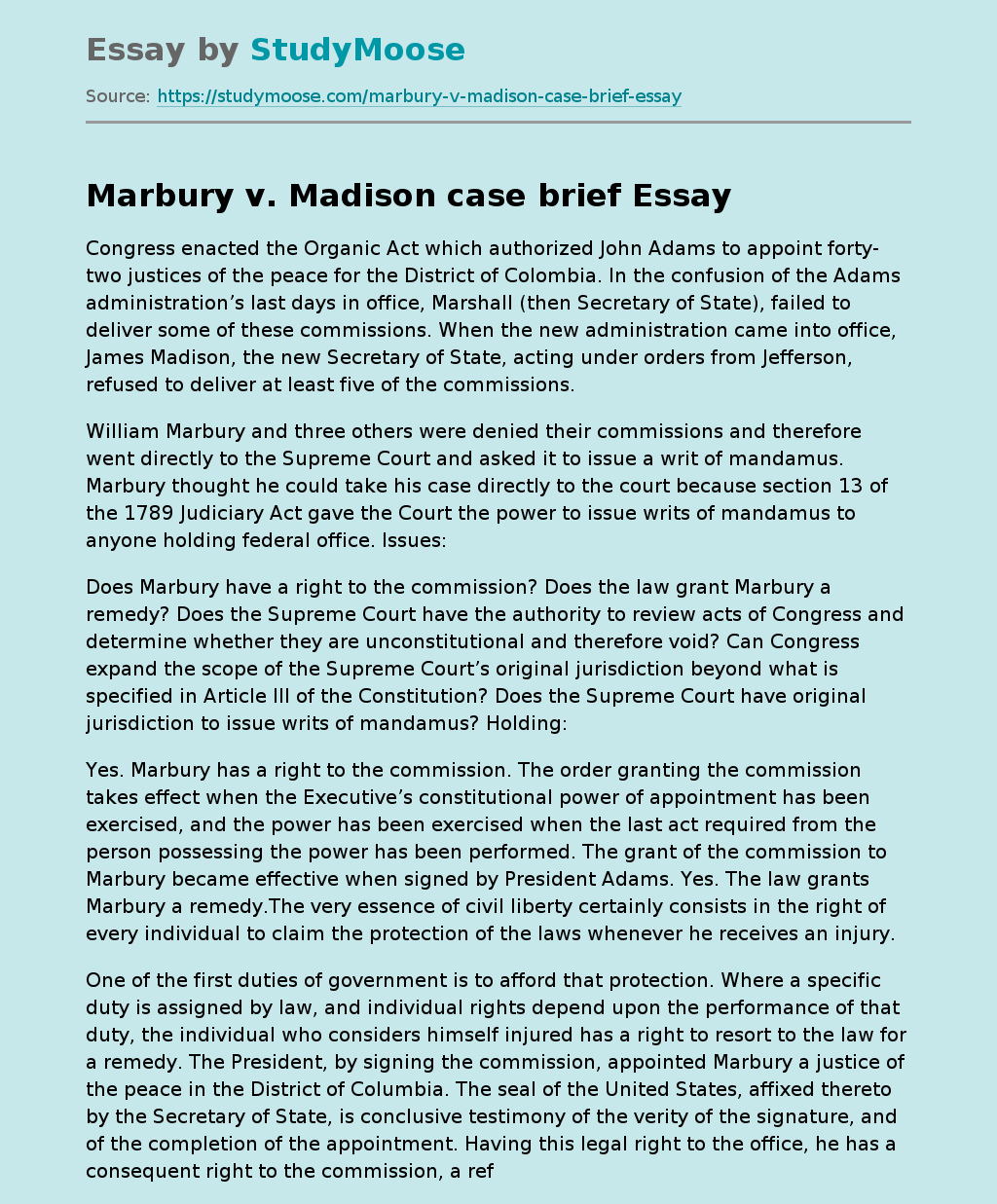