Our country’s population is decreasing because the numerous campaigns were released in order to permit residents to not recreate so rapidly. Singapore’s total fertility rate (TFR) has been on a general decline. The last time that the TFR of the resident population (comprising Singapore Citizens and Permanent Citizens) was above the replacement level of 2.1 remained in 1976. The resident TFR was 1.20 in 2011. Thus, we can conclude that Singapore’s overall fertility rate has been decreasing. The projects that were introduced had a great deal of effect and now we have a decreasing population that has actually sparked a long line of remarks and analysis.

Don’t waste time
Get a verified writer to help you with Population Problems – the Declining Birth Rate
Hire verified writer
$35.80 for a 2-page paper

I personally have my own opinions on the topic that I will cover in the commentary together with other opinions, comparisons, various races and their population and campaigns and their efficiency. However, before we can proceed to further examine this appealing topic, we must initially comprehend the meaning of a decreasing birth rate and how impactful it is to Singapore.

Effect on low birth rate in Singapore Singapore’s TFR (Total Fertility Rate) of 1.16 for last year places in lower than Japan and South Korea, which have TFRs of 1.2 and 1.22 respectively. Taiwan now has the lowest TFR in the world at 0.

91. However, some population experts think that last year’s drop in birth rates might be because of other reasons and could be reversed this year. It is believed by some to be an unlucky year last year for having children as the Chinese zodiac year of the Tiger. With the economy growing strongly and the good years of the Rabbit and Dragon, the TFR is likely to stabilise – or rise this year. Public projects such as the building of hospitals and community centres are funded by taxes collected from the working population. With a shrinking population, fewer people will be in the workforce. This will mean that each working person will have to pay more taxes to fund public projects, such as building more public facilities such as swimming pools and libraries and in turn, this will lead to the vicious cycle as explained below.

Vicious Cycle If Singapore does not raise its birth rate, the number of grandchildren of today’s generation will shrink by two-thirds – and will still have to support their parents, grandparents and family. Apart from the increased burden tomorrow’s generations will face, the shrinking citizen population will also mean a shrinking local workforce. So, while efforts are being made to get more Singaporeans to reproduce, immigrants are needed fill the gap to maintain the Singapore core. In turn, people will lose jobs to the foreign talents that are willing to work hard with a lower salary and will not have the financial ability to get married and have children. Even if some couples manage to have children, those children may turn out to be a menace to society or refuse to work or contribute to Singapore and instead, immigrate overseas. Now, let’s explore the factors as to why Singapore has a declining birth rate.

-The fact that more people are going to colleges and universities, and are working to obtain more post-graduate degrees there, along with the soaring costs of education, have contributed greatly to postponing marriage in many cases, and bearing children at all, or fewer numbers of children. Moreover, the fact that the number of women getting higher education has increased has contributed to fewer of them getting married younger, if at all. In the US, for example, females make up more than half of all college students, which is a reversal from a few decades back. -Some couples have also refrained from having children for fear that they will have children that either do not want to study, are incredibly stressed out from their studies or the parents do not want to teach and help their children in their studies. Seeing as the demand for educated adults in the society is rising, higher education is a rather important factor that results in the declining birth rate.

-The growth of wealth and human development are related to this. High costs of living and job insecurity can make it difficult for young people to marry and start families. This in turn also links to the factor of higher education. -Some young people also have developed qualms of marriage because they have been used to a very wealthy or expensive lifestyle and cannot cope with the need to cut down on his or her expenses just for his or her family. This may be because the people’s living standards over the years have risen. Therefore, the economic development is also a deciding factor.

-Some consider the increase of urbanization a central cause. In recent times, residents of urban areas tend to have fewer children than people in rural areas. The need for extra labour from children on farms does not apply to urban-dwellers. Cities tend to have higher property prices, making a large family more expensive, especially in those societies where each child is now expected to have his own bedroom, rather than sharing with siblings, as was the case until recently. Rural areas also tend to be more conservative with less contraception and abortion than urban areas.

-Changes in contraception are also an important cause, and one that has seen dramatic changes in the last few generations. Legalization, and widespread acceptance, of contraception in the developed world is a large factor in decreased fertility levels. A systematic review, however, came to the result that European fertility rates do not seem to be decreased significantly by availability of contraception. The other way around, the same review also stated that government support of assisted reproductive technology is beneficial for families, but its effect on total fertility rate in Europe is extremely small. However in Singapore, contraception is also a factor and its effect on total fertility rates are not too small.

-Growing female participation in the work force has led to many women delaying or deciding against having children, or to not have as many. A longer pursuit of education also delays marriages. Greater access to contraception and abortion, and greater proclivity of women to use them, also has reduced rates. -Other social changes both separate and related to feminism also have played a role. Bearing children is regarded as less of a social duty than it once was in many societies. Women’s social status increasingly relates with their work or behaviour as consumers rather than from their role as mothers. Indeed having a large family is often socially deprecated, being associated with lower status groups as having more kids may mean that the income will have to be cut by a considerable amount and also, lower class families tend to have more children than the upper-class couples. This is a curious trend as lower class families usually do not have the money needed to raise the children.

-Some governments have launched programs to reduce fertility rates and curb population growth. Some, like the ‘Stop at two’ campaign was very popular amongst the people and it had a large amount of impact and the high birth rate at that time was greatly reduced. In fact, the birth rate was so greatly reduced that until now, Singapore’s birth rate is still rather low.

-There are those who have pointed to the religiosity of the United States with its somewhat higher overall fertility rates as evidence of the influence of religion and human fertility. Some religious groups, such as Roman Catholics, consider contraceptives sinful. This may result in the fact that the Roman Catholics birth rate would be less affected by contraceptives. -Some others, though, claim that religiosity has been found to have virtually no causal relationship to fertility rates. Thus, the factor of religiosity of declining birth rate is debatable and may have different relations to different types of people and societies.

-Another explanation for falling fertility could be a reduction in the frequency of sex in populations with low birth rates. For example, according to a survey published by the Japanese Family Planning Association in March 2007, a record 39.7 per cent of Japanese citizens aged 16–49 had not had sex for more than a month. A study came to the result that instability of modern partnerships is a major cause of European sub-replacement fertility. Also, a number of sociologists and demographers have pointed out that among those who co-habit, without marrying, are now usually likely to have fewer children than those who are married, due to the lack of commitment in the male/female relationship. This uncertainty induces a ‘wait and see’ approach in many cases, especially on the part of the female. Now, that concludes my compilation of the factors leading to a declining birth rate. Let us move on to the analysing of campaigns over the years and how it has made an impact to the declining birth rates as part of the government policies.

Campaigns Over the years, there have been many campaigns introduced in the effort to lower or raise the birth rate. Some examples include the ‘stop at two’ campaign, the ‘have three if you can afford it’ campaign and the many posters and comics made to promote having more babies and introducing old folks into the workforce. Recently, there have been many articles in the newspaper writing all about the declining birth rates. There has recently also been an increase in the birth rate package with involves a hefty sum of two billion Singapore dollars. However, whether this latest campaign works is yet to be seen.

In other countries, there are also campaigns aiming for the same things that we have covered. An example of a policy is China’s famous ‘one child policy’. It restricts urban couples to only one child, while allowing additional children in several cases, including twins, rural couples, ethnic minorities, and couples who are both only children themselves. In 2007, according to a spokesperson of the Committee on the One-Child Policy, approximately 35.9% of China’s population was subject to a one-child restriction. However, The Special Administrative Regions of Hong Kong and Macau are exempt from the policy. In addition, exempt from this law are foreigners living in China. This policy was introduced in 1978 and initially applied from 1979. It was created by the Chinese government to alleviate social, economic, and environmental problems in China. China is a big country that, even though methods have been implemented, China’s population is still large. Thus, China’s government would feel the need of implementing the various methods that have been devised in order to solve this problem. 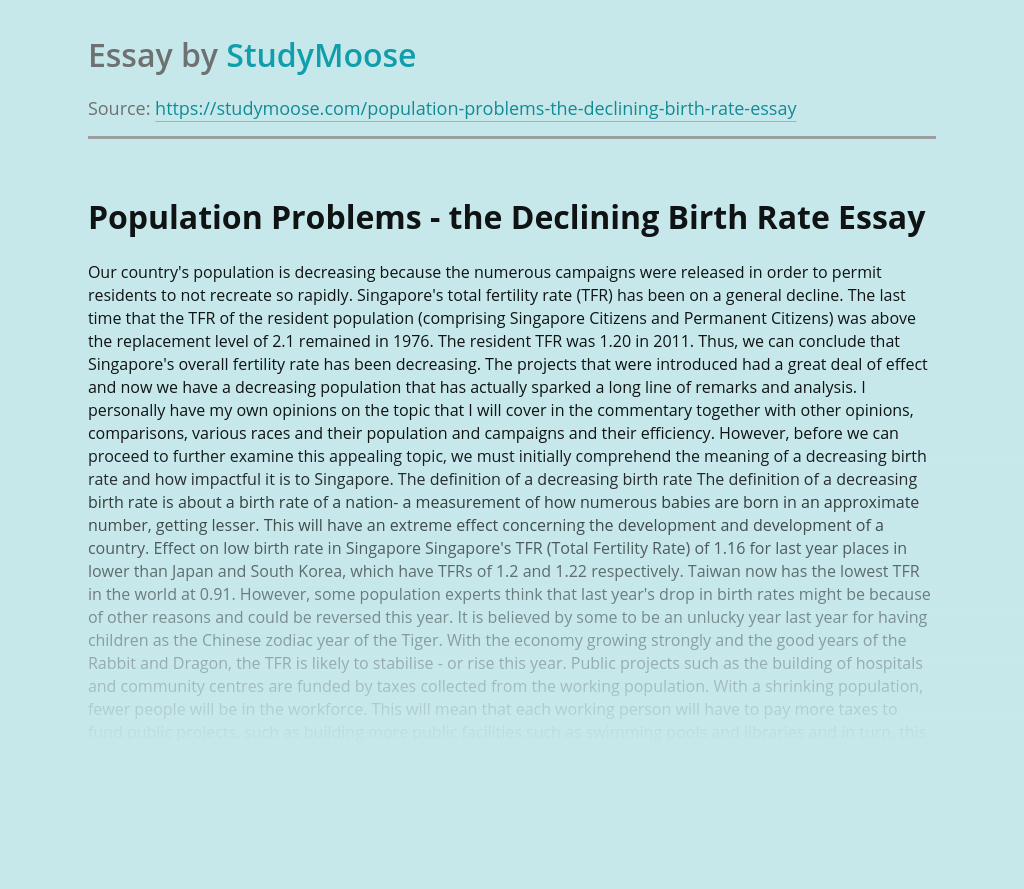